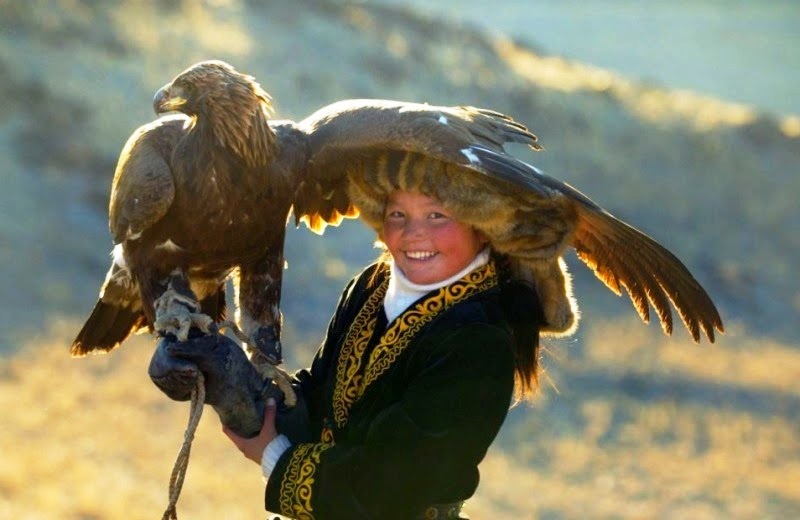 The word pioneer is bandied about for all kinds of reasons, but Aisholpan Nurgaiv is the only person I’ve ever met who’s the first person to do something in 2,000 years. She’s the star of Otto Bell’s The Eagle Huntress, a documentary that chronicles her desire to practice the traditional art of eagle hunting. That desire is somewhat complicated by the fact that the sport is traditionally reserved for male elders (a conservative bunch the world over), and Aisholpan is a teenage girl.

Trained from an early age by her father (who first took her on as an apprentice), Aisholpan goes against Mongolian society’s every expectation and sets off on the road to becoming the world’s very first eagle huntress. (Aisholpan’s father’s first name is Nurgaiv, so for the sake of clarity I’ll refer to her by her first name in the article.)

Eagle hunting is both practical and ceremonial.It’s performed to fulfill the vital needs associated with hunting, but also to show off a little bit in competition. Eagle hunters raise the birds from infancy, slowly getting them accustomed to the specifics of the hunt, then release them back into the wild when the bird reaches maturity. The eagle hunts themselves are often spectacular, as the humans remain on horseback while the action happens around them.

The Eagle Huntress is director Otto Bell’s feature debut. I asked him how he got involved with such a specific, once-in-a-lifetime story. “I actually did stumble upon it,” he says. “I saw a photo essay on the BBC by a young photographer named Asher Svidensky who had stumbled upon Aisholpan in the mountains; he’d been photographing the next generation of eagle hunters. There are only about approximately 250 of them left in the world. He’d been photographing 17-18 year old boys who were a little bit scared and a little bit timid to be photographed with their birds and stuff, and then he met Aisholpan. (…) I was lucky enough to see those photos the day that they came out online. I found him on Facebook, we Skyped, then I said ‘Look, I think there’s a movie in here.’”

“The first time I heard about it, I was very excited to be filmed,” says Aisholpan, communicating with the help of her cousin, who’s acting as an interpreter for the film’s press run. “But, at the time, I didn’t realize that it would be a movie like this — full-length! I was expecting a short or something.”

One of the careful balancing acts in the film was the way the narrative progresses — namely, that although Aisholpan became an eagle huntress over the course of the film, she wasn’t one at all at the beginning. Bell had to be there to capture every step of the way, without knowing how it would unfold… or if it would happen at all.

“It was a massive stroke of luck, basically,” he says. “You know, when you’re making a documentary, you’re generally filling in a bit of the blanks. Something has happened, something has unfolded that warrants a documentary being made about that subject. Oftentimes, you’ve got to tell at least part of the story in retrospect. You’ve got to recreate something, you’ve got to animate something. What was very nice in this case is that, literally the day that we arrived to talk to the family about making the film, we were sitting around in their yurt talking about our idea for the film and Nurgaiv stood up and said ‘We’ve got to go steal an eagle from the mountainside; is that the sort of thing that you’d like to film?’ (laughs) Where I was very fortunate and very lucky — she had been training with her father’s eagle up to that point — I was there to see her take her first step on the road to being a full eagle hunter. That path is pretty predetermined. There are a certain amount of steps that need to be taken to attain full status. That was very helpful in terms of structuring the film, since I just had to follow a chain of events as they unfolded.”

The first thing I noted about The Eagle Huntress is how slick it is: beautiful sweeping camerawork, panoramic vistas and complex sequences showcasing the unpredictable and flurried sport. A little cautiously, I asked director Otto Bell how big his team was. “How many people do you think were on our crew?” he asks back, laughing. “I made this film with three people. We weren’t going to compromise on the production standards. I made it with my life savings — about $80,000 — and a lot of favours. We took about 700 kilos of gear — one of my biggest expenses was excess luggage — and we had to leave a bunch of it behind in the capital city in order to get this little propellor plane to fly up there. We took an X1000 drone that could carry a 4K camera. We had to do justice to the landscape, because it’s so vast up there. My cameraman also invented a nine-metre crane that folds up into a snowboard bag and it weighs about 25 kilos, so that allows us to get those big, sweeping, soaring signature shots that you see in the film.”

The cinematography does ring a bit of an alarm in terms of veracity — how could something so beautifully put together really showcase reality? “I take that as a bit of a compliment, that it looks too good to be true,” says Bell when I bring up that concern. “You can’t direct, in the formal sense, in these situations. First, because of the language barrier. You can’t just say, ‘Go back to position one!’ That stops it right there. I couldn’t really recreate things if I wanted to. For example, the eagle-stealing sequence, that happened on the first day but we shot it from three angles. That sequence happened over maybe 10, 15 minutes. We planned it before we went up. My cameraman Chris, he’s afraid of heights, so he did the wide shot at the bottom. Me and Asher climbed down the cliff side, next to the nest, to shoot the side shot in the film, and then I put a little GoPro under her cardigan to get some closer shots.”

I think it’s not much of a spoiler to say that Aisholpan succeeds at becoming an eagle hunter by the end of the film, but the events depicted in the film are almost two years old at this point. How has Aisholpan’s career fared in the interim. “Every process is the same,” she says. “I didn’t invent anything new or anything different. I have been to many festivals all over the world, though: in Kurdistan, in Abu Dhabi and other festivals like that. (…) When I graduate high school, I’ll probably study in a different city — maybe not even in Mongolia at all. That would give me less chance to be close to the eagles, so I might be doing it less.” ■