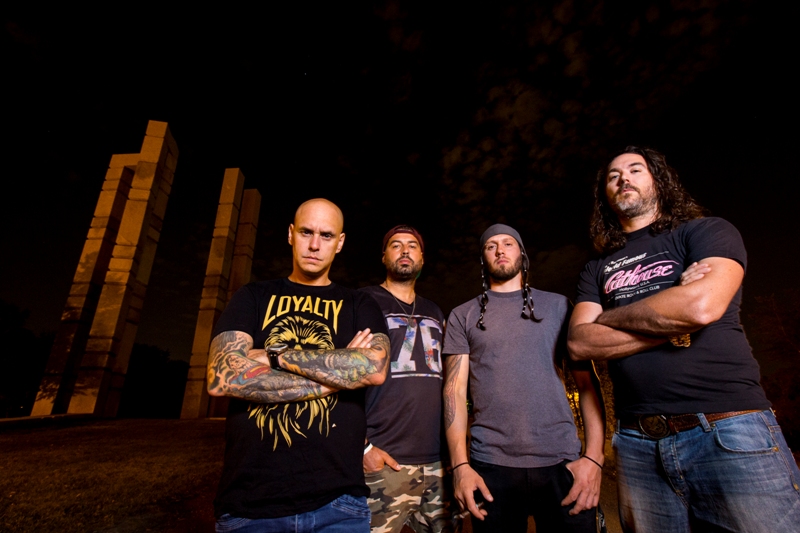 Don’t call it a comeback for Slaves on Dope.

The classic Montreal metal outfit has moved to L.A. and back, changed personnel several times over, and at one point took an extended hiatus. Since a quiet indie return in 2012, core members Jason Rockman and Kevin Jardine have built the road to their recovery quietly and calculatedly, and now have Horse — a powerful collection of heavy, anthemic rockers — to show for it.

With guests including Run DMC’s DMC, Bad Brains’ H.R., Mastodon’s Bill Kelliher and the Damn Truth’s Lee-La Baum plus cover art by Marvel comics artist Marco Rudy, the new SOD album is a triumphant return to form. I sat down with Rockman to get the straight dope.

“We’ve been away for a long time. We put out an album in 2012 but it was really on the DL. It was more of a test between Kevin and I to see if we could really still do this. I’m happy we did that, we put five videos out, but we were really DIY. This time around we were like, ‘You know, we still enjoy doing this. We do it on our own terms now. We don’t have to fuckin’ please anybody. We can tour and play when we wanna play.’ So we decided to step it up a bit and maybe get some cool guests. And then it all happened organically, but it was almost like the stakes were raised every time we made a move.”

“It’s really been seven years since the band’s been back. In 2009 we sorta told people that we were still gonna do stuff. Kevin and I have been the nucleus of the band since the beginning. Rhythm sections have come and gone. Just recently, our bassist Seb (Ducap), who was with us for seven years — he was just so fucking busy with his EDM, and it was taking off. At one point we just looked at each other and were like, ‘Dude, we know this is what you really wanna do.’ At the end of the day, we’re friends. It’s not like 15 or 20 years ago when someone would leave a band and you’d be like, ‘Fuck him!’ We’re grown men. It’s really nice when you can part amicably.”

“The thing about Slaves on Dope now is that it’s fun. The pressure that’s involved all falls on Kev and I. (And) it’s good to understand that hard work will pay off. We’ve made all these things happen. And it’s fun at the same time. There are ups and downs in a musical career that’s been almost 24 years in the making. But I think now our expectations are a lot more realistic than before. It’s still all in, but from a much more mature perspective.

“Metallica knocks on the door and says, ‘We wanna take you out on the road for six weeks?’ Will there be decisions to make? Yeah, there will be. But the whole reason I stepped away 12 years ago was because my son was born. I wanted to be a dad who was home, not a guy that was on the road all the time. So that was one of the reasons I stopped touring and I still hold true to that. I don’t wanna be on the road all the time and miss my kids. Now that they’re getting older, it’s a little easier to get away, and there’s FaceTime and you can bring them sometimes and stuff. They get what Dad does.”

“Being in this band — Slaves on Dope 2.0, if you will — there really had to be a different set of ground rules. First of all there was no democracy, Kevin and I are totally ruling it. So there couldn’t be the same attitude as before. [The other band members aren’t just] employees, they’re part of a team, but they have to get paid. They can’t be expected to put in the hours or finances that we put in. Because really, at the end of the day, it’s still music. There’s no dividends. We still do it out of the love.” ■

Slaves on Dope launch Horse with openers Never More Than Less, Demise of the Crown and Confined to Oblivion at Petit Campus (57 Prince-Arthur E.) on Friday, Nov. 11, 8 p.m., $12