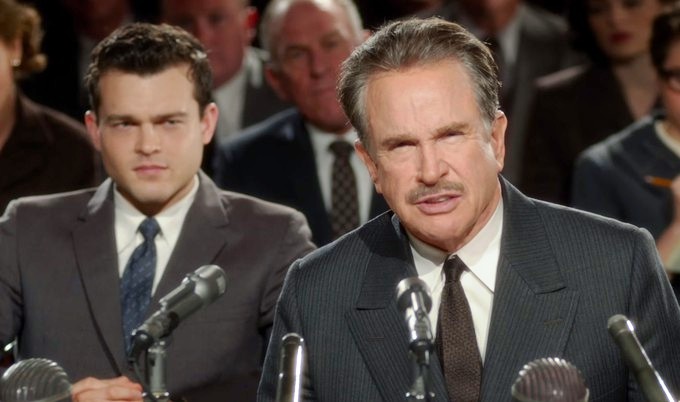 It wouldn’t have been surprising if Warren Beatty never made another film in his life. Reeling from the incredible failure of Town & Country (which he admittedly only acted in) but rich enough that he would never really have to worry about money, Beatty could’ve pulled a Gene Hackman and enjoyed life in the shadows, leaving the aforementioned boondoggle of T&C as a final statement — or, more pointedly, the very opposite of one. As it turns out, Beatty still has some things to say, and he finds a rather inelegant way to say them in Rules Don’t Apply, an elaborate fantasia based on the life of Howard Hughes that seems to be more of a story about Warren Beatty than anything.

“Never check a fact that’s interesting,” reads the title card to Rules Don’t Apply, setting the tone for a film that’s part biopic and part complete fabrication, an ode to the larger-than-life idea of Hughes. Alden Ehrenreich stars as Frank Forbes, a young Californian who takes a job as a driver for Hughes’ production company not to break into the movie business, as most would assume, but to convince Hughes to purchase a plot of land and develop affordable housing on it. Amongst Forbes’s many tasks is the chauffeuring of Marla Mabrey (Lily Collins), an aspiring actress from the Midwest that the reclusive Hughes has put on his payroll — but has yet to meet or even screentest. A devout Baptist, Marla has no interest in being another notch on Hughes’ bedpost, while Hughes sinks deeper and deeper into the obsessive, reclusive behaviour that typified the second half of his life.

Although technically taking place between 1959 and 1964, Beatty (who wrote, produced and directed) culls bits and pieces from Hughes’ life to create the narrative of an ageing titan who becomes increasingly unable, unwilling and uninterested in ruling the empire he’s created. Beatty’s in his 80s even though he’s playing Hughes when he was (ostensibly) in his mid-50s, and one gets the feeling that the film is more of a rumination on Beatty in his 80s than anything. When he’s asked, late in the film, to prove that he isn’t riddled with dementia in order to disprove the claims of a man who has supposedly written a biography of Hughes (this actually happened close to his death, in the mid-’70s… and has also been the subject of a film, Lasse Hallstrom’s The Hoax), the bed-ridden Hughes claims, “I really should get out more.” In that moment, the film seems to be almost entirely about Beatty. In other words, if you want the standard biopic narrative, Scorsese already handled that.

It’s an interesting approach – and one that I’ve enjoyed in the past — most recently in the Chet Baker movie Born to Be Blue — but the trouble is Rules Don’t Apply isn’t really a biopic. Hughes is more or less a supporting character in the film, not appearing on-screen for a good chunk of time and playing his first scene fully hidden in the shadows. It’s also a kind of old-fashioned rom-com between the churchy Frank and pious Marla, a comedy of errors as Hughes tussles with a financier (Oliver Platt) who’s ready to hand Hughes a ton of money over a deal if Hughes will just meet him in person and a tongue-in-satire of the studio system, but never all of these genres at once. It just kind of shuffles through each of them passively.

Beatty struggles with his own pacing, with scattershot editing (the first hour of the film has no sequence that lasts more than a minute and scenes often cut in the middle of a sentence) and a murky sense of storytelling (it’s difficult to know if a day or a month has passed between scenes; several times, the only clue is characters saying “it’s been a while”) making the film feel rushed and choppy, like an old-fashioned ’90s style TV edit.

It’s strange that Rules Don’t Apply is so deeply about Beatty looking back on his own career and his own capacity as a filmmaker so far down the line and yet it essentially puts the onus on the talented Ehrenreich to anchor the film with a character that’s significantly less developed and compelling than both Marla and Hughes. All three leads are pretty great, and their comedic interplay makes up some of the film’s best moments. On the other hand, a never-ending parade of distracting cameos gums up the works some, with people like Ed Harris, Steve Coogan and Amy Madigan popping up for a scene or two (two lines in Harris’s case). It has the glitz and glop of a big rollicking biopic like Scorsese’s The Aviator, but none of the pacing and scope required to make that work.

No part of Rules Don’t Apply is a total wash; it’s often awkward but consistently interesting, and there’s a certain joy associated to watching Beatty on-screen after such a long period away. He’s still charismatic, of course, but the film shows a deep concern towards mortality and the inevitability of irrelevance. I saw the film on the night of Leonard Cohen’s death; like Bowie before him, Cohen seems to have somewhat orchestrated his own departure, and in that same way Rules Don’t Apply seems to be a conscious swan song – or at least, a puzzle piece that’ll fit in one. ■