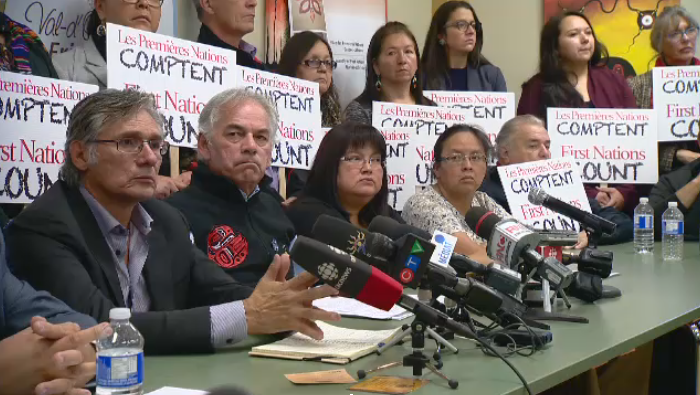 Stop me if you’ve heard this one, or something similar, when it comes to a) complaints against police; b) complaints by Indigenous women; c) complaints by women who say they’ve been sexually assaulted.

Despite moves by Quebec to bring in outside police investigators and outside prosecutors, the chance of these women seeing justice has always been slim. For many of them, this latest battle is just one of hundreds they have waged throughout their lives against violence and sexual abuse. As women, they have learned to endure systemic oppression inside and outside their own villages, and as members of First Nations communities they have faced a lifetime of deep-rooted discrimination from the settler society that controls so much of their destiny.

When Radio-Canada’s Enquête investigative journalism program aired these women’s complaints a little over a year ago, it sent shockwaves across the country. There was considerably less shock in Indigenous communities, however, where mistreatment and discrimination at the hands of mostly white police is a daily fact of life. Similar tales were soon being told publicly in Maniwaki, Sept-Îles and Schefferville — and privately in living rooms, shelters, healing circles and prison cells across the country. (Marginalized women are among the most common victims of sexual assault and violence.)

Quebec politicians were quick to denounce and demand and wring their hands, promising action and change. Investigations would henceforth be handed over to a special squad of Montreal police officers — as if changing the uniform outside made them less blue on the inside than their SQ peers. Special prosecutors from outside the community were named — as if that would make it easier to lay charges in incidents where, in most cases, the only witnesses to the alleged crimes were the accusers and the accused.

No, the deck was stacked against these women from the day they were born.

The decision to not lay charges will only be officially confirmed on Friday, but both the accusers and the accused officers have already been informed, numerous media outlets have reported.

But even if, by some miracle, charges were to be filed, history has shown us over and over again that the likelihood that any of the officers would spend a single day in jail is about as slim as your chance of finding a grand-prize 6/49 ticket tucked in your windshield.

Maybe it’s better that the charade end now, rather than dragging the intimate details of these women’s lives into the public arena, then rewarding their courage months or years later with a seemingly inevitable kick in the teeth.

Apparently forgotten among the Liberal government promises in the wake of the Enquête report was Premier Couillard’s vow to create an inquiry to look into relations between the province’s Indigenous peoples and police.

That’s a pledge that First Nations leaders haven’t forgotten, however, and the calls for the creation of a commission of inquiry will no doubt intensify considerably now that the justice system has once more revealed its inability to live up to the promise of its name.

The Couillard government and native affairs minister Geoff Kelley have tried to sideline the demand by palming it off on the federal government inquiry into Missing and Murdered Indigenous Women, but chief Ghislain Picard, leader of the Assembly of the First Nations of Quebec and Labrador, told Le Devoir this week that “we will continue to ask for an investigation.

“There is nothing that prevents the government from carrying out an inquiry that is specific to Quebec, even as it feeds into the national inquiry.” Quebec, he added, was trying to find comfort by hiding behind the MMIW probe.

Indeed, although the mandate of the MMIW will no doubt lead it to examine the role of police in investigating the deaths and disappearances of anywhere from 1,200 to 4,000 First Nations women, a Quebec commission would have a much broader mandate.

(The issue of sexual assault and the justice system also merits a profound re-examination and reform, but it should be independent of any other inquiry.)

Among the issues that need to be addressed is the wildly disproportionate and still growing rate of arrests and incarceration of Indigenous people, the lack of cultural awareness training of SQ officers assigned to territories with significant First Nations populations, and the need for alternative approaches to law enforcement in remote communities.

An inquiry will allow women and men to step forward and tell their stories outside of the adversarial environment of the justice system, to document what has gone wrong and for commissioners to propose ways and means to remediate the role of police in the systemic oppression and discrimination that has weighed so heavily and so tragically on Indigenous women, men and children since Jacques Cartier first “discovered” the territories they had called home for more than 12 millennia. ■