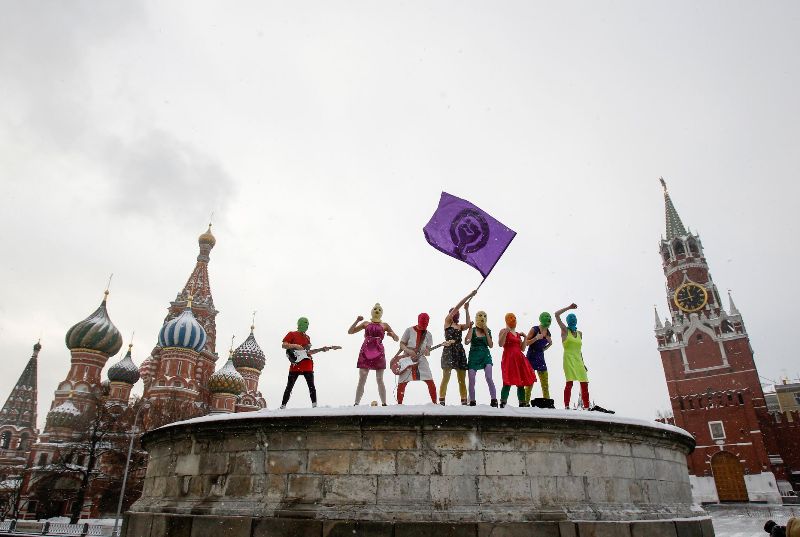 Donald Trump is one of Vladmir Putin’s biggest (or at least loudest) fans. How closely would Trump’s USA resemble Putin’s Russia?

Despite its free market, uncensored Internet and semblance of democracy and justice, Russians don’t enjoy a lot of the freedoms that we take for granted in the west: proper elections, free speech, the ability to protest, LGBT rights and a (relatively) independent media.

The heart of the former Soviet superpower has somewhat reverted to its old ways: hired assassins (probably the FSB secret police, the contemporary KGB) have been known to eliminate Putin’s political foes (like Boris Nemtsov) and journalists who expose his regime’s crimes against humanity (like Anna Politkovskaya). Russian TV and newspapers are state-controlled propaganda peddlers that vilify activists and push the government’s nationalist, internationally aggressive agenda. Putin’s reign — and the influence on government by untouchable oligarchs — won’t be toppled by mere votes, and harsh sentences for political prisoners will continue to deter dissent.

It wasn’t always like this. As recently as 2012, in the wake of a clearly rigged election, resistance erupted. “That was a period of hope,” says Maria (aka Masha) Vladimirovna Alyokhina of Pussy Riot, the feminist punk band and activist collective founded in 2011. “Our anonymous protest was one part of a big movement in Russia.”

Clad in their signature colourful balaclavas, Pussy Riot staged guerrilla performances in public spaces, and one such stunt in front of an Orthodox church (in reaction to the church’s support of Putin’s presidential campaign) led to the arrest of three members of the group, Alyokhina included. The women were convicted for “hooliganism” and spent nearly two years in prison.

“Now it’s a totally different country — Putin feels like he can do anything,” says Alyokhina (a so-called “enemy of the state”). “They annexed Crimea and the war between Ukraine and Russia isn’t even finished. We’ve had two years of permanent war in our country.”

Parallels between Russia and the U.S. already exist. Throughout the period of Putin’s presidency, a glut of right-wing American news outlets — operated and staffed by sociopathic spin doctors — helped to bring about the Bush administration (and the Republican stranglehold on congress under Obama), which famously waged the “War on Terror,” made military-grade weapons more accessible, worked the system to suppress minority votes, imposed anti-LGBT and anti-abortion bylaws, blocked progress on climate change and cut taxes for corporations and the one per cent.

Over the past year, the current Republican presidential candidate has validated and incited hordes of white supremacists, gun lovers, working class suckers, rich douchebags and everyday jerks with his vague platform and fascist, racist, misogynist, moronic statements. If Trump wins the election on Nov. 8, the best case scenario is that he won’t be able to do most of what he’s promised, but he’ll inevitably halt progress and turn the U.S. into even more of a corporatist kleptocracy.

“All of the powers should be against Trump,” Alyokhina says. “It is very important not to give power to a crazy asshole. The U.S. can get this lesson from our situation; you can look to our country and see what can happen after that.

“Nobody expected that Brexit would happen in Great Britain, but it did,” she adds. “Maybe it’s just a time for crazy things. We should be prepared for that.”

Pussy Riot didn’t cease and desist after the 2012 arrests. Among their members’ many activities are a high-profile protest at the Sochi Olympics; Alyokhina and another group member played themselves confronting a fictional version of Putin at the White House in an episode of House of Cards; they released a new music video, “Straight Outta Vagina,” in reaction to Trump’s “grab ’em by the pussy” comment; Alyokhina collaborated with the Belarus Free Theatre on the play Burning Doors to raise awareness about Ukrainian filmmaker Oleg Sentsov (recently sentenced to 20 years in a Siberian prison) and Petr Pavlensky, an artist who set fire to the doors of the FSB and is now awaiting trial.

But there’s more to Pussy Riot than the band and the group’s unmasked and publicly named members. Like Anonymous and Femen, Pussy Riot is not an exclusive club or a trademarked brand.

“Thousands of people around the world are putting balaclavas on, and they are Pussy Riot as well,” says Alyokhina. When asked whether jail-time made her apprehensive about activism or about living in Putin’s Russia, she said, “I have no time to think about safety. In prison I realized that it doesn’t matter how you live. The most important thing is to keep your position and to do what you feel you need to do to make things right. This is how I exist.” ■