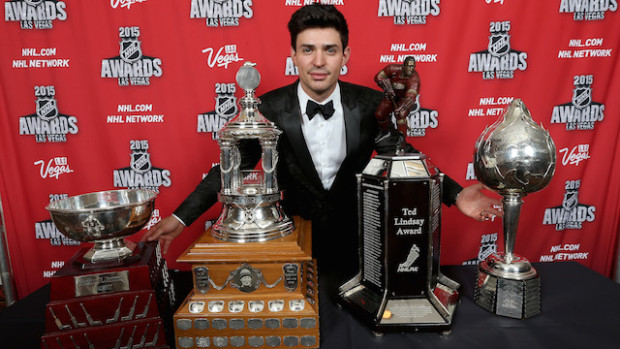 Carey Price and his awards

Crisis averted? After the humiliating loss vs the Columbus Blue Jackets last Friday, many were fearing that the Canadiens would fall back into the shitshow of last season, but thankfully it was not so. Here is a quick summary in 140 characters (or just about) for each respective game in the week that was.

* Philadelphia: (W) The Habs pulled through in a hard-fought game vs. the Flyers immediately on the heels of the 10-0 debacle vs CBJ.
* Boston: (W) Late game heroics by Paul Byron sealed the game. Golf legend Jack Nicklaus made a surprise visit to the locker room before the game.
* Los Angeles: (W) Everyone’s favourite (unfairly) whipping boy David Desharnais was benched in a game that saw his replacement Philip Danault earn the 1st star of the game.

An alarming trend has emerged over the last couple of weeks, as the Canadiens have been outshot by opposing teams in seven consecutive games. While being consistently outshot is not the most ideal strategy to maintain a position at the top of the NHL standings, finding ways to win (note: cliché alert) despite this is a remedy to keeping spirits and fan support high. In a previous column post, I suggested that the manner in which the Canadiens respond to the first significant fork in the road would be the most telling sign of the intestinal fortitude of this club and while things have not been ideal in their play, the results can speak for themselves as the team has accumulated 25 out of a possible 28 points in the standings in 14 games this year. Carey Price has been flat-out god-like and has yet to lose a single game in nine appearances this season. The Montreal Canadiens have also maintained a perfect record on home ice.

In many ways, aside from the 10-0 loss (which is looking more like an aberration as the team has won three consecutive games since) this has been a dream start for the Habs so far. Much was made in the aftermath of that game as to why Michel Therrien had refused to pull Al Montoya and the answer is pretty simple: Price’s health needs to be a priority. Being thrust into a game in which the team had pretty much already lost would have been irresponsible and at worst could have risked an injury to Price. Playing in a professional hockey requires significant preparation, and even if Price makes it look so easy at times, the risk of going into a game “cold” could have had disastrous consequences. Therrien was criticized for his decision not to insert his star goalie into the game, but it has ultimately proved to be a wise decision as the team has been perfect in the win column since last Friday.

Carey’s health needs to be the number one priority for the team and is the only thing that has prevented the Canadiens from seriously competing for the Stanley Cup in recent seasons. While the consequences of Price’s injury last year has been well-documented, we need to also remember that the Habs also faltered during the 2014 playoffs when Rangers player Chris Kreider “accidentally” ran into the star goalkeeper.

Many fans will also forget that Price also missed game five vs. the Ottawa Senators during 2013 playoffs due to injury, in yet another instance of the team’s season ending prematurely in large part to an injury to “Jesus Price” So if you add all this up, three of the last four seasons, with 2015-16 being the sole exception, have ended with the Canadiens not being able to overcome an injury to their star goalie. This is why Therrien refused to risk inserting him into the game last Friday, because so much of the team’s success rides on keeping Price healthy and in the line-up.

His play thus far has been so stellar that he is on his way to repeating his historic season of 2014-2015, when he took home both the Hart (League MVP) and Vezina (Best Goaltender) trophies in a landslide victory. His play was recently described as boring to watch on RDS’s Antichambre program, due to the fact that he is always a few steps ahead of the play and it rarely out of position. He has also been voted among the three stars of the game in six of his nine games this season. The L.A Times even referred to him as a potential “hall of famer” due in large part to saves that look like this.

It has also become commonplace for opposing coaches and teammates to refer to him as the best player in the entire NHL and with this distinction Habs fans can only dream about the endless possibilities that his future holds in Montreal.

To put things in perspective, he currently sits in third place among all-time winners in Canadiens history behind the likes of two pioneers such as Jacques Plante and Patrick Roy, and he has a shot of surpassing them both within the next three to four years. And while his calm and cool demeanour is completely in contrast to that of fiery and ultra-competitive fan-favourite Patrick Roy, he is slowly closing in on the gap distinguishing their legacies in Montreal.

All Montreal Canadiens fans should hope for, moving forward, is for Price to remain healthy and lead the team to an elusive Stanley Cup victory. For now though all fans can do is to keep calm and Carey on, and cross their fingers that he can stay on the ice long enough to cement his legacy in Montreal and place him among the most elite company this historic club has ever seen. ■