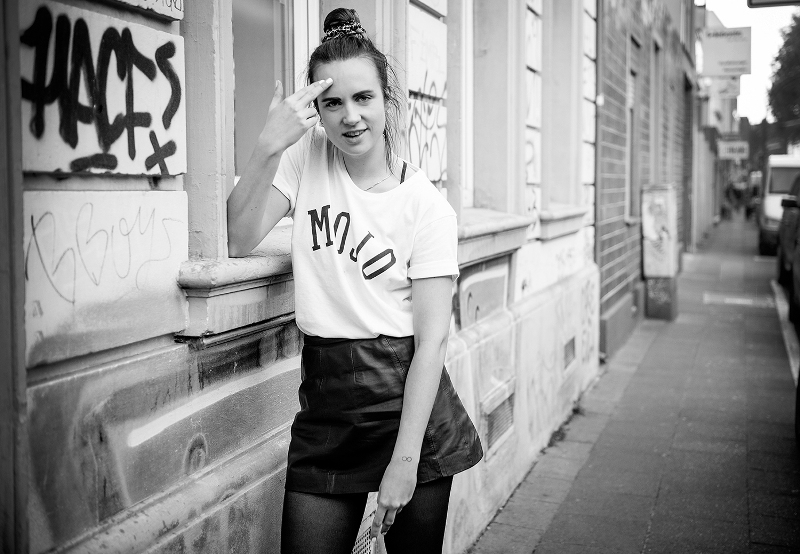 For many pop stars their voice is what they bring to the table, with the writing and more creative aspects of their music lying with their producers. But for Karen Andersen, better known as Danish pop sensation MØ, it’s all about the DIY aesthetic for her brand of dance music.

“I’ll have wrote a song on a piano in my parents’ living room, another in a hotel room in France and one song I recorded in my childhood bedroom with blankets on the wall,” says Andersen, who also recorded all the vocals for her first album No Mythologies to Follow in that very bedroom.

This hands-on attitude pushed MØ to be one of the few musicians creating zines for her community.

“I’ve always been super into zine culture, I love collages, poems, how-to-do’s, little drawings, it was a little bit of a dream come true,” she says. “It made so much sense to take what my fans from the Internet had done, mix it into a little zine with some of my own shit, and give them out.

“I used to be in the punk environment, I was an activist and just in that whole scene when I was a teenager,” Andersen explains. “We started this band called MOR when we were 17, it was super political and feminist but also fun and like ‘Fuck society’ and stuff like that.”

While that may sound like a far cry from the pop star that’s made a name for herself with Top 40 hits like “Lean On” and “Final Song,” she insists her punk roots are what sets her live performances apart from her contemporaries.

“I evolved my stage persona in the punk scene. Bands would roll on the floor, interact with the audience, covered in beer and go nuts — it runs in my veins. There’s such a freedom to watch someone just let go; I think that’s the biggest gift you can give the audience, to say ‘Let go’ and that’s important for me. I couldn’t perform if I had to be too much in my head, think ‘Oh do I look good now, am I in the right place, am I doing the right choreography?’ I have to just fucking go for it.”

This commitment to her fans hit Andersen pretty hard when she recently had to make a hard call to postpone half her fall tour to finish her second record.

“I originally thought I’d have plenty of time to finish the album on tour, but a month ago I was like, ‘Oh shit’ all these dates where I thought I was going to be in the studio just ended up being filled with promo. I really want to have something to present to my fans so I have to bite the sour apple and postpone some shows, but those fans get new music. But it sucks — I hate doing things like that.”

That album, which is poised to land next spring, is set to feature all her singles since No Mythologies to Follow, some more political tracks, as well as songs she’s been writing since just after the release of her previous album.

“Always with albums it’s a sum-up of what happened since the last record and the thoughts I’ve been having.”

One thought was live instrumentation, as she notes that her first album was mostly a digital effort. “I think pop music needs more organic instruments right now,” she says. “Not a ton  — it’s a mix, and there’s a balance you want to find.”

Another balance has been evolving as an artist while staying true to her sound, which she’s struck with some helpful collaborators. “I’ve been really trying to find some people that I like to work with that see me as the person and artist that I am but also get where I’m trying to go. My goal is to have that perfect balance because I want it to be super personal but I don’t want it to be the same record. I want to move ahead.”

A recent live collaboration with Mel C (Sporty Spice) on her cover of the Spice Girls’ “Say You’ll Be There” alternatively had Andersen feeling like a kid again. “When she came on stage and started signing all the original ad libs (Andersen proceeds to sing over the phone) I turned seven years old, I was so happy.”

MØ will be playing a headlining set in Montreal next week, four months after her last appearance here as part of the Osheaga festival.

“I’m excited to play a club show in Montreal — it’s been two years since I’ve played my own show there,” she says, adding that she just wants to put on a great show for her fans, regardless of the venue. “You can expect me to be 100 per cent myself and give everything I have in my lungs and body, that’s for sure.” ■