Washington D.C. is a very strange place to be right now.

On the street, in the bars and in one particular Capitol Hill restaurant filled with government employees of one kind or another, Donald Trump’s victory last night didn’t feel like welcome news. There was very little partisanship on display here on election day, but only one of the many people I’ve spoken to or overheard talking politics in the past 24 hours has been pro-Trump. The most stereotypical ugly American I’ve seen was a woman in the Trudeau airport security line-up (en route to another U.S. city) wearing a red suede Nascar jacket and too much rouge, giving a prolonged stink-eye to a Canadian Muslim girl in a hijab.

As I write this, the news is still sinking in, though my initial shock (followed by dread and physical shut-down) has worn off. How fucked will this country be over the next four years? We know that progress on issues like climate change and health care will stall if not step back, and that “the bottom line” (for big business, small business and possibly for Trump himself) will be prioritized over anything else. Whether the worst case scenarios suggested by Trump’s racist, xenophobic, isolationist rhetoric will become policy remains to be seen, but D.C. is the perfect spot to be nostalgic for what this country used to stand for, and to be reminded about how it’s gone wrong. 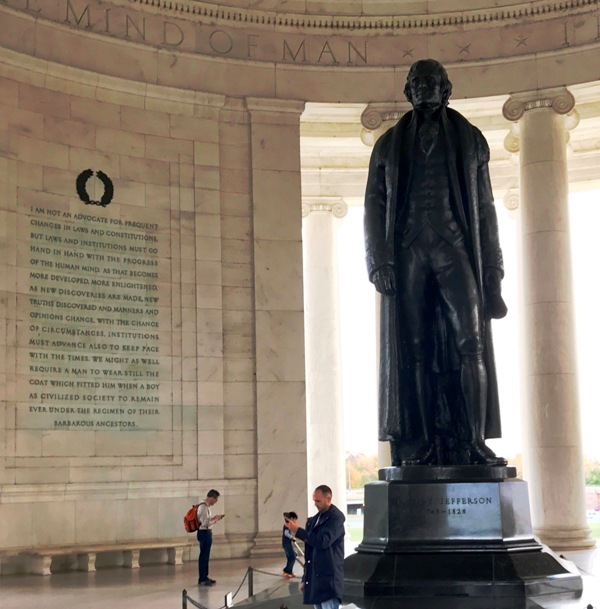 I spent yesterday touring sites that mark the nation’s highs and lows: memorials for the casualties of Vietnam, Korea and WWII, and for progressive presidents like FDR, Lincoln and Thomas Jefferson (slave ownership notwithstanding), their statues rendered truly majestic by the inspiring quotes engraved in stone next to them. Jefferson’s most prominently placed quote could be read as a sound rebuke to Second Amendment fundamentalists, and I wondered whether the Trump family behind me (the only visible supporters I’ve seen here) would reject that analogy. (We can assume, in this period of duelling realities, that the answer is yes.)

Then there’s the Holocaust Museum. Its devastating permanent exhibition outlines how the great tragedy of the 20th century was brought about not just by the Nazi leaders and their final solution but with the cooperation of regular Germans, the rejection of refugees and internment of innocent people by a number of countries, not to mention centuries of irrational anti-Semitism around the world. “Never again” is the popular refrain about the holocaust, and yet the museum also highlights more recent instances of genocide, ethnic cleansing and war crimes, including the current situation in Syria. 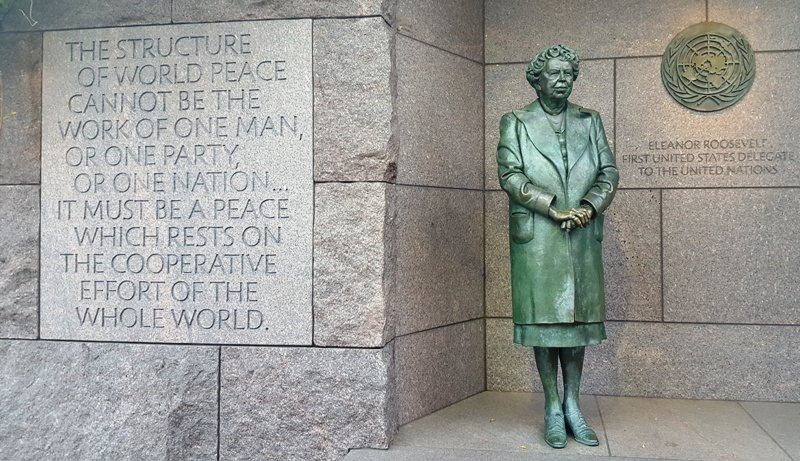 All of this seemed prescient on election day, under threat of a Trump presidency — the people and the ideas that made America great a long time ago, the country’s noble sacrifices and foreign policy follies, and the horror of fascism and hatred of “the other.”

Trump sounded remarkably presidential in his speech at 3:30 a.m., but the bar is set so low for him, and it’s easy to be gracious in victory. Could it be that, as I just heard a panelist say on CNN, he’ll be more of a pragmatic businessman than a demagogue? Was his campaign vitriol just a dog whistle to gain the support of disaffected idiots? Again, the bar is so low that it might be easy to feel relief over what will probably be a fairly mediocre, unremarkable presidency, as opposed to another Hitler.

Will the U.S. we know be recognizable in four years? Probably. There are still some great things about this country, but this election makes it clearer than ever that this is a country on the decline, its best days long past. On that note, I’ll be spending most of this rainy day in D.C. indulging in American nostalgia at the Smithsonian. ■