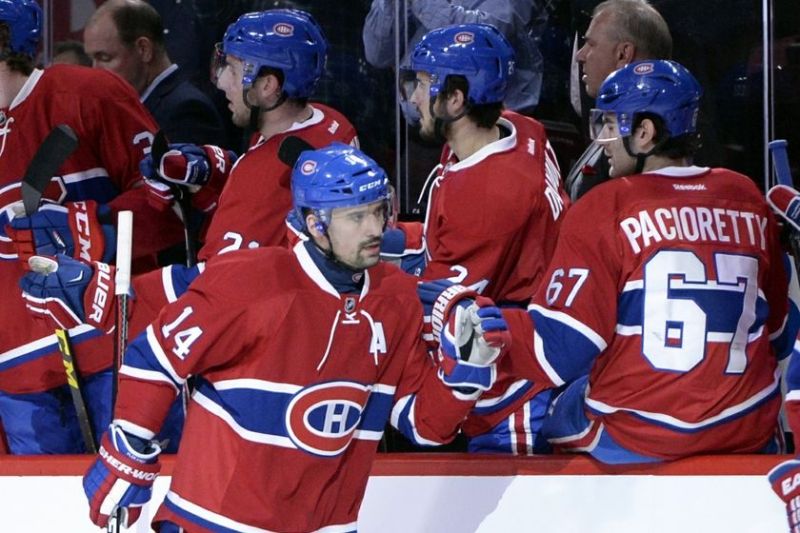 It’s been a tough week for the Canadiens as they only picked up three out of a possible eight points. Here is a summary of each respective game in 140 characters or less (or just about):

Red Wings: (W) Habs came out flying on all cylinders in what was a near perfect game. Huge performance by Andrew Shaw.

Blackhawks (L): Al Montoya played a solid game in his first match back after that 10-0 debacle. Close but no cigar.

Panthers (OTL): First Loss by Carey Price in over 1 calendar year. 2 broken sticks in the final sequence of the game led to a bizarre finale.

Hurricanes: (L) 3rd consecutive loss for the Habs came as a result of a sleepy third period.

Still holding the top spot in the Eastern Conference, the Canadiens find themselves in a good position to make the playoffs by the time the spring comes around despite the fact that the season is not even a quarter of the way through. Even though the team has dropped points in three consecutive games for the very first time this season, there hasn’t been much for fans to complain about so far. While this column has been overtly positive about the team’s performance so far, here are few things that need to be addressed if the Canadiens hope to make significant push as contenders for the Stanley Cup this year.

Call it my own personal wish list but you can pretty file this under “series of events that need to occur for the Montreal Canadiens to go all the way”:

1) Carey Price has to stay healthy ALL season: This is the easiest one to point out. The Canadiens typically go as far as their star goaltender takes them. His all-world form is the primary reason that the team the team finds itself in first place and it is position that they should sustain if he remains in the lineup. He has yet to lose a single game in regulation this season, with his last regulation time loss dating back to October 29…..in 2015.

2) Max Pacioretty has to shake off the rust and get back to scoring goals (consistently): It’s been a tough season for the Canadiens captain, who has averaged over 30 goals on a consistent basis over the course of the last four seasons. His struggles have even recently led to a demotion to the third line where he has played with the likes of this long-time bro David Desharnais and surprise contributor Phillip Danault. With his current scoring pace not up to par (projected at only 19 goals over a full season) much more is expected from the team’s leader. While the success of the team overall has made his lack of scoring palatable, it is rather unrealistic to expect the likes of Paul Byron and Phillip Danault to outscore the team’s biggest scoring threat.

3) Tomas Plekanec has to get his shit together: This has been a strange season for the Czech centre’s turtleneck swag. With only one goal in 17 games on his stat sheet so far, the highest paid centre on the team needs to contribute more offensively. The common argument/consideration made in his favour/defence is that he is often tasked with shutting down the opposing team’s top players on a nightly basis. This isn’t an easy task and is a role he often excels in but he needs to bring his A game more often to justify management’s trust when they rewarded him with a average salary of $6-million per year for the next two seasons after he started off strong last season.

4) Tampa Bay Lightning must have a difficult time overcoming the injury to Steven Stamkos: The Lightning are well-coached and are a well-balanced team across the board going as far the Eastern Conference final for two seasons in a row. But disaster struck last week when their star winger Stamkos suffered a serious knee injury which is expected to keep him on the shelf for the next four months. This might have a positive impact on the Habs’ chances of remaining in first place, as Tampa Bay is considered to be the strongest team in the Atlantic division. If they fail to overcome the loss of their leader, it might actually yield benefits for the Canadiens. Schadenfreude at its best.

5) Management needs to help out the aging Andrei Markov: The Russian rearguard was once considered the pillar of the Habs’ defensive brigade. But that time is good and gone, as he is now 38 years old (old in hockey years) and cannot handle the burden of playing the most important minutes on a daily basis. That role now belongs to Shea Weber, but that doesn’t mean that Coach Therrien doesn’t continue to rely heavily on Markov. In order to keep his legs fresh and his game at a high level, the coaching staff must allocate his minutes to younger players such as Nathan Beaulieu and Jeff Petry. However, if the latter are not up to the task, exploring the trade market for some help in this department might ultimately be a path to consider for management to help keep the puck out of Carey’s net.

6) GM Marc Bergevin needs to add an experienced left-winger to the roster: Let’s do some quick math.  First line LW Max Pacioretty finished last season with a total of 30 goals. He’s without a doubt the strongest player at that position and by a large margin at that. The rest of the left wingers on the roster, which includes the likes of Artthuri Lehkonen (0-Rookie), Paul Byron (11), Daniel Carr (6), Sven Andrighetto (7), combined for only 24 goals as a unit last season. And while a couple of these names have surprised so far this season, there is a glaring hole and lack of experience in the Habs’ roster. The only logical way to remedy this issue is to explore the trade market to solidify the team’s chances when the playoffs come around in April.

If this seems like nitpicking at this stage, the team has recently admitted that there are a number of things that need improvement including defensive play and being continuously outshot by opponents. It goes without saying that when compared to a laundry list of issues that faced the team last year, the list above feels like a walk in the park.

With a difficult five-game road trip looming in a week for today, in which the Habs will square off exclusively vs. teams that made the playoffs last season, Therrien needs to make sure that the players are up to the task. The Canadiens have a bad history when it comes to extended road trips in the west, so I’d like to preach caution for the rocky road that may lie ahead. ■