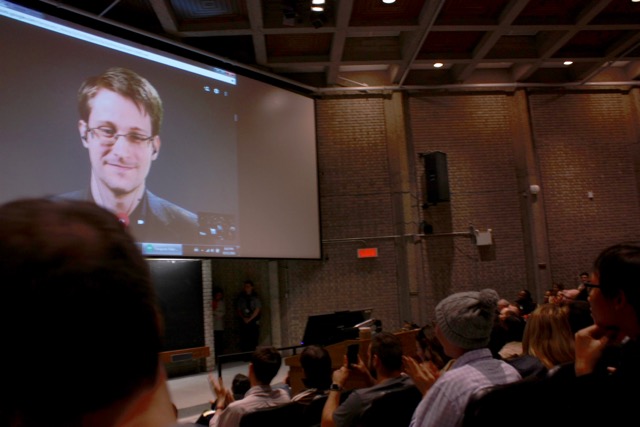 Former NSA contractor and privacy advocate Edward Snowden spoke at McGill on Wednesday, and it was a mess. There were confused crowds, angry protestors, and, eventually, Snowden’s actual comments about privacy and surveillance in Canada, particularly relevant after police surveillance of Montreal journalists was exposed this week.

The event was badly organized. Where the line began wasn’t clear to those waiting, but with thousands of people lined up to get in, the queue extended from the Leacock Building across the McGill campus and up University Street past the Trottier Building, a distance of at least 600 metres. Several mad dashes occurred as gossip spread through the excited crowd. At least one attendee reported injuries, and is hoping for an apology from Media@McGill, the event’s organizer.

Then there was the strike. The AMUSE union of temporary and part-time workers formed a picket line across the entrance to Leacock 132, the lecture hall in which the event was scheduled to take place. The union had been on strike since last Friday, seeking a $15/hour wage and the same benefits as McGill’s full-time employees. AMUSE viewed the event as their workplace because had they not been on strike, AMUSE members would have been working as ushers at the talk. They had a message posted on their website for the crowd, which was mostly made up of their fellow McGill students: “To cross this picket line [and attend the talk] is to undermine the strength of our strike and stand with the employer instead of the workers.”

The crowd became frustrated that they weren’t being allowed in, and many blamed the protestors for the delay. McGill security was then ordered by Media@McGill to clear Leacock and start a line outside before letting anyone into the lecture. This was a task that was impossible as the crowd in the hall swelled beyond the handful of security guards’ control.

Why were Media@McGill and McGill security so unequipped to deal with the size of the crowd? It’s not like they didn’t have warning. Well over 6,000 people said that they’d be attending, with another 15,000 indicating interest in the talk on the event’s Facebook event page. The organizers were happy to bask in the popularity of their event among university students but not deal with the consequences of gathering a group of people that large. The seating plan for Leacock 132, the lecture hall chosen for the talk, says the room has a capacity of 600.

Speaking after the talk, Professor Christine Ross of Media@McGill said that the event was a huge success and that they were amazed by the turnout, but if they could organize the event again they would have implemented a ticket system similar to the one they had used when former U.S. vice president  Al Gore spoke at McGill.

Media@McGill warned on the Facebook event page that seats would be given on a first-come, first-served basis and that “due to contract restrictions” the talk would not be live-streamed or recorded. When the organizers realized just how many people were waiting to get in, they got Snowden’s approval to live-stream the event on YouTube. They also set aside a second room, Leacock 26, for those who couldn’t get into the original venue. Leacock 26 is designed to accommodate less than 200 students, according to seating charts.

When the talk actually began, almost an hour after the scheduled start time, the crowd erupted into applause when Snowden’s face appeared on the screen. He was speaking via video chat from Russia, where he’s in exile, wanted in the U.S. under the Espionage Act.

A former NSA contractor, Snowden achieved notoriety when he released classified material about the nature of the NSA’s surveillance on U.S. citizens to journalists in 2013. Snowden has since become a leading advocate for surveillance reform and privacy rights, and the focus of the mainstream films Citizenfour, a documentary about Snowden’s leak and subsequent exile and Snowden, a fictionalized political thriller. To some he’s a hero standing up for private citizens’ rights and to others he’s a traitor who put American lives at risk by exposing ongoing counter-terror investigations.

The event was originally supposed to consist of Snowden speaking for close to an hour, followed by a half hour Q&A session. Due to the late start and technical difficulties, Snowden spoke only shortly, talking about his story and current issues of surveillance and privacy in a Canadian context.

His comments couldn’t have come at a better time, as Montreal is now dealing with a surveillance scandal of its own. Reports came out earlier this week showing that the Montreal police had been spying on local journalists by monitoring their locations and communications. The police had obtained dozens of warrants from judges used to find the identities of journalists’s sources from their investigations into police corruption.

Snowden found the targeted surveillance of journalists in Montreal particularly troubling, saying that the “fourth estate” must be allowed to operate with privacy as a requisite for their watchdog status in a democratic society.

During the Q&A, Snowden was asked about who he’s supporting in the American presidential election, which is taking place next week, on Tuesday, Nov. 8. Snowden declined to reveal his preference out of principle, saying that no one would have to answer that question in a free and private society, and that the opinions of public figures like himself shouldn’t influence voters’ decisions.

Snowden’s talk was interrupted when the privacy advocate’s Google Hangout video chat link, which was left on ‘public’, was left on screen during the Youtube live-stream. Internet trolls interrupted his speech, with one prankster writing “You are being watched” on the stream. Snowden showed good poise, never letting the distractions affect his temperament.

Responding to a question about what university students could do to improve privacy in their own digital lives, Snowden advised people who need secure communications, like journalists, to use encrypted communication apps such as Signal.

“We need to move to a paradigm where all of our communications are encrypted by default,” said Snowden.

Snowden can’t empathize with those who say they’re ok with their records being collected, because they “have nothing to hide. That’s like saying ‘I don’t care about free speech because I have nothing to say.’” ■