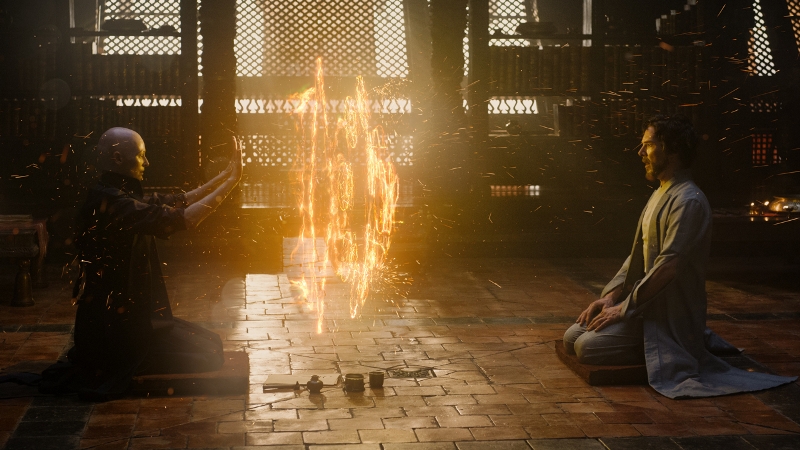 I wonder what Roger Ebert would make of this endless slog of superhero movies we currently find ourselves in. I’m not trying to compare myself to Ebert, of course, but the fact is that I have to write these damn things every time one comes out and I’m finding it increasingly impossible not to repeat myself each and every time. Ebert was a prolific writer with wide-spanning and sometimes unpredictable tastes that spanned 40 years of film trends.

I specifically wonder what he would’ve made of Doctor Strange, he who gave the 1997 Spawn film a generous 3.5 stars on the basis of its visual ingenuity. Doctor Strange is, in many respects, extremely derivative of the typical Marvel formula and yet it stands curiously alone with its trippy visuals and hippy-dippy philosophies. I wonder if Ebert would have appreciated the way it both stands out and blends in — because I’m not certain I do.

Doctor Scott Strange (Benedict Cumberbatch) is a highly skilled Manhattan neurosurgeon who’s so good at his job that he barely has time for a personal life, with only limited interactions with a colleague/ex-lover (Rachel McAdams) to pass the time between complex and groundbreaking surgical interventions.

One rainy evening, a spectacular car crash brings an abrupt end to his career. Though he recovers admirably for a guy who basically shattered into a million pieces, Strange is unable to regain enough strength in his hands to continue working as the best damn surgeon who has ever surgeoned.

Strange hears through the grapevine about the Ancient One (Tilda Swinton), who teaches the magical arts in Nepal, a dimension-hopping, time-travelling mishmash of various spiritual and philosophical practices that may be able to help him. He’s reticent to accept the Ancient One’s training at first, but his desire to regain his skills trumps all — especially when a monk (Mads Mikkelsen) filled with bad juju and kung-fu skills powers through the galaxy to steal a scroll (or whatever).

Of all the nonsensical, dense yet uninteresting origin stories in the Marvel Universe, Doctor Strange’s is perhaps the most nonsensical and dense. While Strange essentially begins his journey as a less wealthy Tony Stark, the lengths the film has to go to in order to lay the groundwork for his character is particularly thorny and explicative. It’s a bunch of Castaneda-esque philosophy woven in with more traditional fantasy elements that perhaps stands alone in the cinematic superhero sphere (for now, anyway) but isn’t necessarily better.

Part of the problem is that no matter how short or how long the explanation is, every single origin story exists solely so we can understand the long chunk of the film where our heroes are draped in CGI and whipping shit at each other. Doctor Strange is no different in that respect, continuing a long line of Marvel films that culminate in an expensive shit-whipping session.

Where Doctor Strange does eventually stray from the pack is in its visuals. Although the Marvel Cinematic Uuniverse has employed many talented directors in the past, it has had them stick mostly to the same flat visual palette from film to film. Director Scott Derrickson shakes things up by making Doctor Strange a bit of a psychedelic mindfuck, all Escher-esque landscapes folding onto themselves and melty acid trip imagery. If the film is no more fun to follow than any of its ilk, it certainly makes up for that by being a lot more fun to look at. It’s pretty hard to make any special effects stand out in an age where they envelop every blockbuster, but Doctor Strange makes a strong case for seeing a movie for its special effects above all else.

It’s watchable enough, mind you. The cast is filled with terrific actors, though only Swinton actually gets to do something interesting with the role, while supporting actors like Chiwetel Ejiofor and Rachel McAdams vomit exposition and origin story mythmaking while patiently waiting for another Marvel movie where, Strange having been dealt with, their character might get to do more. It’s particularly sad to see Mikkelsen wasted as yet another glum, ungraspable Marvel villain — even though he’s spattered with glitter and doing kung-fu through the cosmos, he’s one of the weakest aspects of the film. Imagine that.

The character of Strange in and of itself seems a worthwhile addition to the MCU, even if the film feels (like so many before it) like the endless paperwork that precedes a big project. At the risk of repeating myself, it’s a little depressing to see studios spending hundreds of millions of dollars on what I can only assume is foreplay for the actual interesting projects they may be considering down the line… but it’s been years at this point. Perhaps those movies will never happen. Maybe this is just an endless fan-out of more and more obscure superheroes whose origin stories need to be told before they slipped into the fold of an A-list Dirty Dozen that whips shit at each other. I don’t know. This one sure is trippy though. ■