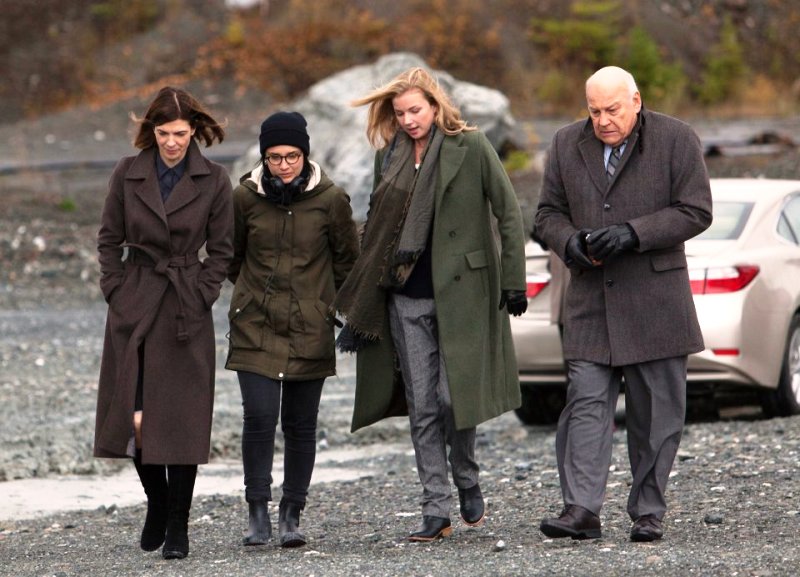 Robichaud (second from left) on the set of Pays

Chloé Robichaud’s first film, Sarah préfère la course, made quite a splash in 2013. Selected as part of the Directors’ Fortnight at Cannes, the film announced the arrival of a major new talent on the local scene — one that’s starting, slowly but surely, to look younger and more diverse than ever before. Robichaud’s second film (she also made a webseries, Féminin/Féminin, soon after Sarah) is a political parable that takes on the Plan Nord in a way that’s both intimist and concerned with the broader picture. It’s easy to have a particular image in mind when you hear “political film from Quebec,” but Pays isn’t that.

“When I first had the idea for the film, I thought about the three main characters and the general political nature of the film,” says Robichaud. “I thought that if I used the actual story of Plan Nord, it would force me to stay within that conflict and create characters that are involved. I thought that would censor me, in a way, and prevent me from telling the story I wanted to tell. I decided to take it to a broader perspective and invent the country outright. I also found the symbolism of the island beautiful. We all work on who we are in order to better serve the world collectively, and the island represented that, in a way. It also allowed me to make the film universal. The film speaks a lot about Québécois and Canadian issues that I hope will resonate with people here, but I presented the film in London and it resonated with them, too.”

Emily Price (Emily VanCamp) works as a political mediator, impartially leading discussions between parties. The job requires her to travel a lot, which has put a strain on her marriage and her relationship with her young son. Her latest job takes her to Besco, a small country off the coast of Canada (the film was actually shot in Labrador and Newfoundland), where negotiations between the Canadian government and President Danielle Richard (Macha Grenon) over the exploitation of natural resources are slated to happen. Besco has something that Canada wants, and Besco is in enough of a precarious economic position that it might need to give Canada what it wants. The Canadian government representatives (Rémy Girard, Serge Houde and Nathalie Doummar) travel to Besco in order to negotiate a treaty.

Both Doummar and Grenon tell me that Robichaud is a director that simultaneously knows exactly what she wants but also leaves a lot of space for the performers to make their own decision. I ask her how she perceives that sort of contradiction. “I can come into it with a preconceived notion but at some point, they’re real women who exist,” says Robichaud. “They can’t possibly mirror the image in my mind. I always give the actors the first take, and we adjust accordingly together. It’s a creation; we’re working together. I’m not here to impose my will, that would be pointless. They won’t be comfortable and it won’t feel real.”

The timing for Pays’s junket seemed quasi prophetic: I spoke with Robichaud, Grenon and Doummar on Nov. 8, the day of the U.S. presidential election. There are some rather obvious parallels here — the fact that the president of Besco is a woman, for one, but also the way that Doummar is treated by the chauvinistic minister played by Rémy Girard.

“I saw the film three times,” says Doummar. “Every time I see it — and especially the third time — it really hit me how pertinent and necessary it is. Every time I see new things in it.”

“There was definitely something to make of that at the performance level,” says Grenon. “This politician that I play, she’s competent, but she doesn’t give a good show. When we made the film, there was something I thought was very interesting. There’s a scene where I’m interviewed on this public affairs show, on this sort of tacky set, answering tabloid-y questions from a journalist who doesn’t seem to care about any of the issues at hand. What’s interesting about that is that I was really uncomfortable doing that scene; I couldn’t sit right, couldn’t find any comfort… and when I brought it up to Chloé, she said ‘That’s what I want! Danièle wouldn’t be comfortable!’ So I thought… my character doesn’t have a great personality. She’s competent, she knows her job, she fights for what she believes in. She’s a great politician, which comes at a great cost to her personal life, but she just doesn’t have it with the media. That seems incredibly topical, doesn’t it?” ■

Note that Pays (known as Boundaries in English) is only screening in French, with no subtitles.