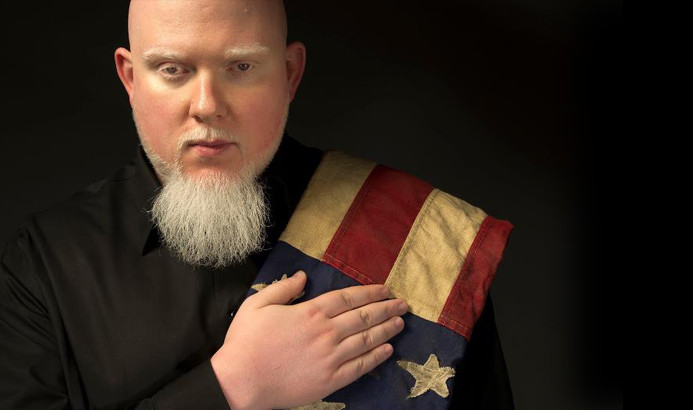 Underground rap mainstay Brother Ali is the kind of MC who’s either one of your favorite rappers of all time, or you just haven’t fucked with him yet. There’s no in between.

And there can be little doubt that the pensive, soulful and lethally skilled poet has inspired the newest crop of lyrical idols breaking new ground in the mainstream with intelligent, carefully crafted music traditionally embraced only by headphone hip hoppers. A Kendrick or a Chance owe a debt of solidarity to Brother Ali, who could have gone whichever way he wanted with his unique talent for singing, rapping and painting a mental picture for the listener over the last 10 years.

Perhaps Ali hasn’t seen the heights of their success, but he shares a common reality with them in that as a lightkeeper on the noble path of rap, he’s stayed true to his own ethos of being the best he can be without compromise. This in turn has helped keep the doors open for talents of his pedigree, whichever scale they may operate at commercially or critically.

Ahead of his show in town Monday at the Fairmount Theatre with his good friends and Rhymesayers labelmates Atmosphere (the production half of which, Ant, has also produced the bulk of Ali’s official label projects), I caught up with Ali by phone to see what’s new. He hasn’t released a project in several years, and on his last Montreal stop in 2014 there was no set date for anything new, so it was great to learn a little about his forthcoming new record, completed with Ant, his backstory with Atmosphere and Rhymesayers, his lasting friendships and about being a dad to black kids in in America. Here are some highlights.

On his next project:

“I finished a full length album with Ant. It’s officially done and I believe it’s now headed to mastering. Ant produced the whole thing. We made the music part together in the Bay. We both found ourselves being drawn there for different reasons that were kinda pulling at our hearts, so we ended up in the Bay through different paths to the same thing. That’s when we reconnected and we made the music out there together. We did the bulk of it last December.

“I went out there to study Islam — the first accredited Islamic college is in Berkeley. So I went out there and did some preliminary studying out there. I was thinking I might even take an extended leave from music to go to school there and some of the teachers kind of convinced me to not do that. So I ended up doing an independent study, they kinda offered to teach me one on one so I could continue doing music.

“Ant had connected with a studio out there, actually somebody (through) our connection with Jake One. Ant and Slug came out to my show for the Mourning in America tour in San Francisco and there’s a musician that Jake One works with a lot named G Koop, who’s an amazing musician and studio dude. He plays on all kinds of stuff, like the Drake record and things like that. He’s kinda Jake’s go-to guy when he needs to replace a sample. So Ant was at that show and G Koop was at the show and they ended up making (Atmosphere’s) Southsiders album together, and he also did everything for the Fishing Blues album (also by Atmosphere). And so I actually went there with him when they did the music for my album. And that’s how that all came together.”

On his friendship with Ant:

“It’s just really good to be working with him again. Our lives just kinda pulled us in different directions. Like, I had a few years where a lot of the people I started in this business with, our lives went in different directions. And that was really challenging for me because so much of the work is about relationships, and when those people aren’t around, it can be a challenge. So it just felt good to get back.

“There was never any bad blood or anything like that, but I just kinda missed working with him and I realized that doing the album with Jake was good. I learned a lot because I had to kinda be the motivating force behind making that album happen. Jake was into it — he gave a lot of his time, but I had to be the lead in terms of keeping things going and on track. I learned a lot from doing that but I prefer Ant to do that ‘cause beyond making beats he’s really good at helping craft a song and craft an album, and keeping track of what we need. There are times where I think we’re done, or that we have a full album, and he’ll just know that it’s missing something. It was really great. Also he is just one of my favourite people and dearest friends.

“I met Ant through Musab. Musab is one of the main connectors that makes Rhymesayers what it is. In a lot of ways he’s kind of the heart of Rhymesayers. He also connected Ant with Slug — and all these guys, really.

“Ant always thought I was a good rapper, and I always wanted to work with him but he felt he didn’t know what to do with me. A lot of times he’d say ‘You don’t need me, just keep doing what you’re doing.’ And that was kind of his approach. He wasn’t against me being around or anything but he didn’t see right away what our connection musically could be. When I finally got the green light from Rhymesayers to go ahead and start making an album, I asked him if he would do some of it, like if he would do a few things for me.

“So I went to his house one time by myself without any of the other artists and our first time together we made the first single from Shadows on the Sun, a song called ‘Room With a View’ and a song called ‘Bitch Slap.’ We made both of those our first time working together. It was a lot of fun and I think his main thing is, if he can’t get to you as a human being — like, if you’re just a solid rapper — he’s like, ‘Someone else can give you great rap beats. You don’t need me for that.’ But if you’re ready to share who you are as a human being, your secrets and all that kind of stuff, then that’s when he gets excited. And so I think with those songs, he saw that, and he saw a kinda more traditional hip hop approach than what he was doing with Slug at that time.

“So then I just started going over every weekend. I don’t work fast like other people at Rhymesayers do. Like Slug writes a ton of songs and Ant makes a lot of beats, and I’ve just never been that way. Back then for me to do a song a week was all I could do, I just couldn’t imagine doing more than that song. So I’d go over there every week and I’d have a new song. And we became close like that, making that album.

“Now when we work it’s mostly, more than anything else, it’s just catching up on life stuff. And those conversations become the album.

“It’s a lot about friendship and community and how to live with people, and how to honour the bonds we have to each other.”

On raising a black family in America:

“(My kids are) doing well. This is our lives, so we don’t learn about it like… our kids don’t see something on the news and then ask us about it. It’s a constant reality for us and a constant conversation for us, so it’s not like we have moment like, ‘Ah man, now we’re gonna have to talk about this.’ They live with this as their reality 24 hours a day.

“(My teenage son Faheem) knows that there are great people in the community around him but it’s not a secret to him that within the institutions of society, the best he can hope for is to be left alone. He’s not being served, or appreciated or welcomed, and that’s just very, very obvious. So he’s going to schools that don’t care about him. He’s already had interactions with law enforcement. When he was a kid he stole a bag of chips from a teacher and they called the police. A cop came in with his gun and that kinda stuff. That’s what I’m saying. I think a lot of the reactionary, ‘all lives matter’ kinda people, they learn about these things from TV. And they think everybody learns about these things from TV and so they say the media makes people of colour distrustful of the police, and that’s just not the reality.”

On being a Rap Dad:

“It’s all I really know. It’s hard to know, like, ‘Am I doing a good job or not?’ It’s all I know. I’m grateful for the fact that I get to decide how I spend my time. I’m grateful that to a large degree I get to decide the things I want to participate in or not. I’m grateful I don’t have a particular job or corporation that I’m beholden to for my livelihood. The flipside is that I have to travel a lot so I’m physically not present somtimes. A lot of other people, their reality is that they might be home every single night but their thoughts and feelings aren’t necessarily their own.”

On being out with Atmosphere again:

“We did some stuff in 2007 and ’08, we actually did a lot of touring but most of it was abroad. We all performed on stage together and combined our songs. But to me it’s such a meaningful thing to be on tour because I started my career with them. They taught me how to take this thing I love to do and make an actual genuine career and sustainable life with it. They didn’t have to do that. It wasn’t essential to their success to help other people. They could have just been — you know, it’s more rare now. In the underground anyway, most of the people that come up now are individuals. Kendrick and Joey Bada$$ and them have crews, but it is more rare now. West Africans have an axiom that says if you want to go quickly, go alone, but if you wanna go far, go together. There’s a lot of truth in that.” ■