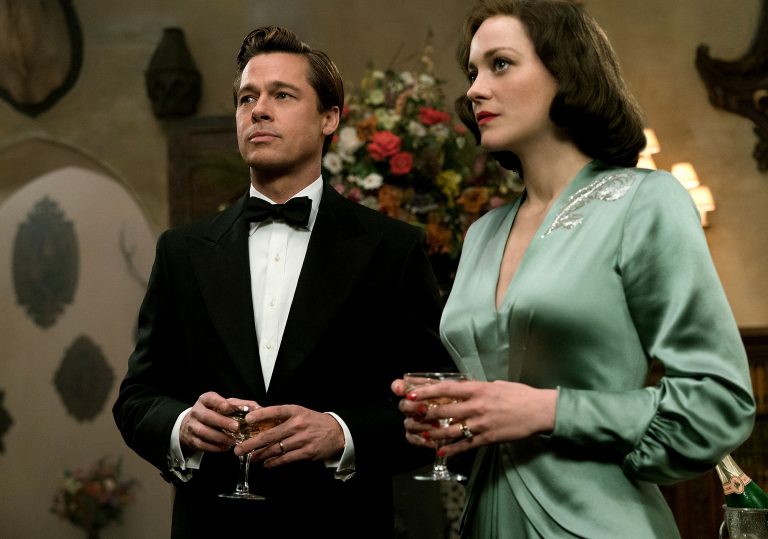 Sometimes I feel like any big-budget major release that’s also an original idea and doesn’t culminate in a flurry of CGI and some form of to-be-continued cliffhanger should be showered with kisses and celebrated with the highest praise. It’s hard to keep in mind that Hollywood still makes all kinds of movies, and the simple fact that a movie from an out-of-fashion genre is coming out within what sometimes feel like a samey block of programming doesn’t make that movie better, necessarily.

Robert Zemeckis’s Allied is an old-fashioned war adventure that blatantly tips its hat towards Casablanca and other wartime classics of the 1940s and ’50s. This is not, as you may guessed, a particularly fertile genre these days, but that doesn’t necessarily put Allied in the upper tiers of anything, really.

Canadian operative Max Vatan (Brad Pitt) parachutes into French Morocco with a very specific mission: He’s to link up with French resistance fighter Marianne Beauséjour (Marion Cotillard) in Casablanca and pretend to be her husband. Beauséjour has already infiltrated the Germans there and obtained an invite to an exclusive party thrown by the ambassador, who they will then assassinate. The plan works perfectly and the two fall in love, going back to live in London as the war continues to rage. They have a daughter and live as bucolic a life as you can hope to live while being constantly assaulted by air raids, but then Vatan gets some extremely harsh news: the British Army has identified Marianne as a potential German spy and they need Max’s full cooperation in order to fully expose her. If she’s indeed a German spy, he’ll have to execute her by his own hand or be executed alongside her by the army.

Zemeckis is clearly drawing less from WWII history and more from the movie version of WWII, particularly the films that were being made during the war. It’s not really a movie that looks back on the lessons learned from history but rather at the immediate drama that captivated filmmakers back then. Case in point: it’s one of the only WWII movies in recent memory that has absolutely no basis in an actual historical event (the other one is Inglourious Basterds). One could argue that’s somewhat irresponsible to write history out of history, but it’s also undeniable that Zemeckis achieves the feel he’s going for pretty effortlessly.

Considerably more effort is expounded by the leads, both of which are forced to spend about half the movie speaking a language that isn’t their first. Vatan originally arrives in Morocco posing as a Parisian named Maurice, speaking extremely garbled and incomprehensible French that the Paris-born Marianne calls “pure Québécois”. It’s not so much pure Québécois as it is pure melting GPS unit, and the film stretches credulity when Vatan slides by unnoticed in his undercover role despite the fact that he pronounces his wife’s name “marry-on.” On the opposite spectrum, Cotillard’s English is more than a little laboured, which means that in the entirety of their scenes together, one of the two leads is out of their depth.

Allied is an old-fashioned picture show in a lot of ways — glamorous stars being glamorous, big soapy emotions and races against time to save the greatest love of all. Zemeckis adds some modern touches (enough “fucks” to justify an R rating, a semi-covert lesbian relationship for Max’s sister, played by Lizzy Caplan) and avoids pastiching the particular style and conventions of movies made 70 years ago, but it’s zippy and loud and generally not too nuanced. The film’s most egregious flaw, in that regard, is an extremely futile coda that only serves to heighten soapy emotions and ruins a perfectly good ending in its devoted search for a few more tears to wring out of the audience.

There’s nevertheless a kind of purity to Allied’s pursuit of silver-screen classicism. Even its flaws (which also include some extremely dodgy CGI here and there; Zemeckis hasn’t abandoned his main squeeze) seem to be part-and-parcel with its strengths. I doubt that this movie is going to bring old-school popular filmmaking to the forefront — the allure of superheroes is too much and the wallets Hollywood needs to pilfer belong to a demographic that’s too young — but it’s nice to be reminded of the simple pleasures of the handsome man, the beautiful woman and their very serious problems. ■