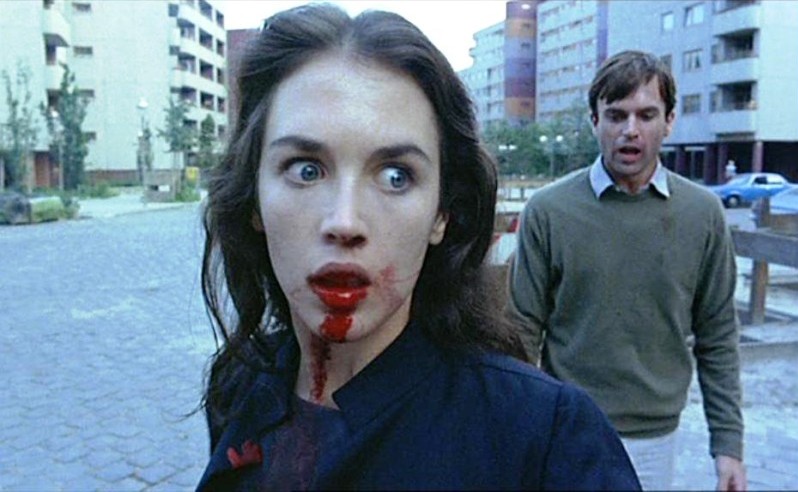 Repertory screenings in Montreal have been having a rough go of it for the last few years. Aside from the Cinémathèque and Cinéma du Parc, few have been able to cut it for more than a couple of years at a time. The Empress cinema project remains in flux; a promising proposed Little Italy project never got off the ground and smaller micro-cinemas like the Blue Sunshine Psychotronic Film Centre and its spiritual successor the Noah have all folded.

Since early 2016, it’s Bar le Ritz PDB’s turn to try and fill the void through two screening series: the monthly Femmes Femmes series curated by Anika Ahuja and Rebecca Ladds and the 35mm program curated by Adam Abouaccar. Femmes Femmes’s programming focuses primarily on films with a strong female presence that revolve around the theme of “hysteria” (past screenings include Repulsion, Possession and Suspiria), while the monthly 35mm screening series isn’t themed in any particular way.

“Rebecca and I have been friends for about a decade,” says Ahuja. “She’d just moved to Montreal, moved in with me and brought a projector with her. We’d talked about film quite a bit and drawn up this list of films we were interested in, and we thought “Let’s just screen these and invite people over to hang out!” A friend of mine used to be in charge of programming at the Ritz, so one day I just asked if they wanted to have a film screening series. That worked out perfectly. Adam eventually found out about the screenings, reached out and… (laughs) is a lot better at this than I am!”

I bring up the fact that programming is a bit of a double-edged sword; on the one hand, there are people like me who attended Blue Sunshine to see obscure cult classic and other things that were completely unknown to me. On the other hand, if you want to make money, a more populist approach that screens known quantities like, say, Back to the Future or Die Hard is practically a can’t-lose proposition — but a significantly less interesting one.

“It’s something that we’ve spoken about,” says Ahuja. “We have a bit more of a specific mandate than Adam; we’re showing films that have some relation to the concept of hysteria and the desire to raise awareness about female mental health issues and raise awareness of female representation in film and how it’s changing. Within that, because we’re raising money, we do want to make sure we have an okay turnout (laughs).”

“So we’ll play something like Possession by Zulawski, cause that’ll bring out a lot of people,” says Ladds. “The idea was to do every one of those while we’re still coming up and people are starting to find out about us, so that way they’ll know why they want to come. But we do put in movies that we hadn’t heard of before. We played this movie called Alucarda, which is a Mexican movie from the ’70s. Total B-movie, and the reaction of the crowd for that one was so much louder.”

“I wouldn’t want Total Recall to be indicative of my programming,” laughs Abouaccar. “It was just that I had access to the print and a lot of the 35 is dictated by what I have access to. I think that if I do have a mandate with my programming, it’s that I’m playing stuff that doesn’t already have a home in the city. (…) The first screening I ever did at the bar was a Mario Bava double feature, just because I couldn’t think of another place — except maybe Cinémathèque interdite — who would do that. But no, I’m definitely a big fan of the sort of 12-year-old boy programming. Keeps us in balance!”

For Ahuja, Ladds and Abouaccar, it’s important that their screenings be executed as legitimately as possible, and that means obtaining permission from rights holders, paying screening fees and screening original 35mm prints whenever possible. It also means paying for a separate liquor license that applies only to the screenings. “When I met the original booker, he was sort of complaining out loud that he was going to have to start paying screening rights for the movies they were showing at the bar,” says Abouaccar. “I didn’t want to say anything at first, but then I took a moment to explain that this is exactly how it works, that there are people that you have to deal with…”

“Femmes Femmes is technically a non-profit, in the sense that all of our screenings are pay-what-you-can,” says Ahuja. “We ask for a $5 donation for each film, and we have basically been giving the proceeds to different local charities. We’re not gonna turn anyone away at the door, but ideally… because it’s pay-what-you-can and because it’s for a good cause, we’ve been really lucky.”

Working with 35mm also leads to some unpredictable twists, as Abouaccar learned recently when screening Paul Verhoeven’s Total Recall. The reels were projected out of order — a mishap that has been a real learning experience for Abouaccar. “It’s made me super cautious,” he explains. “Yesterday, I had a Blu-Ray player, two laptops and three copies of the movie. But yeah, that was awful, and that had to do with us getting too comfortable, I think. The first two screenings with the projector went really smoothly, and we just sort of threw that one together and didn’t really look over the stuff. All that to say that now, the Sunday nights before the Monday night 35mm screenings and I sit down and watch the movie from start to finish and we have a backup copy. That said, everyone was really cool about it. (…) We sold more posters than ever before. It’s that Producers idea that you can make more money with a flop than a hit. People were going back to the cash, getting their ten dollars back, reach into their own pocket, pull out another ten and give it back to the cash for a poster!”

Each 35mm screening offers the possibility of purchasing a poster by artist Connor Willumsen, a prolific illustrator and comic book artist who has, in fact, drawn the DVD covers for The Killing and Scanners for the Criterion Collection. A limited amount of posters are available at each screening.

“When we decide to do film — and hopefully we’ll be doing more 16, 35 and film stuff — it’s not because of the charm factor, you know. It’s because we think it’s better,” says Abouaccar.

“You’re also keeping it accessible,” adds Ladds. “Because it’s in a bar, you know, not in a basement screening room at Concordia. It’s at a place everyone knows to go to and enjoys.” ■

Today’s 35mm screening is a double feature of Night of the Comet and Miracle Mile, presented in collaboration with Fantasia. 179 Jean-Talon W., Monday, Oct. 17, doors at 7 p.m., first film at 8 p.m., $10 for both films