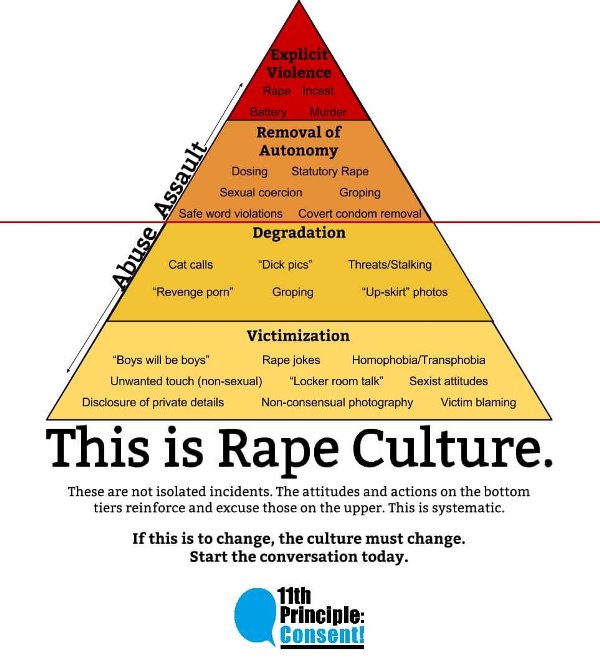 A friend of mine who works with sexual assault victims recently asked me to keep an eye out for news stories, features or opinion pieces that she could post on her organization’s site. They already had lots of content from French-language media, but she wasn’t set up as I am with constant feeds from English-language publications ranging from The Guardian to CBC and Tyee, not to mention posts from my rather broad collection of activist friends on Facebook.

It won’t surprise you to hear that I was soon flooding her with links. Stories about judges who seem more intent on judging the victims than the accused, about bungled investigations, about university campuses where acts of sexual assault were featured on lists for freshmen scavenger hunts. I also sent her the rare “good news” stories I came across, such as efforts at Bishop’s University introduction of mandatory training for freshmen students on sexual violence.

In recent weeks, there has been no shortage of local stories about sexual assault, ranging from intrusions in a student residence at Université Laval to allegations of assault against Quebec MNA Gerry Sklavounos. As newsfeeds became flooded with stories, editorials and essays, a new wave of testimonials about the insidious nature of sexual violence began flowing even as the woman who had accused Sklavounos, Alice Paquet, became, quite typically, a target of character attacks that had nothing to do with the alleged assault.

When CTV Montreal executive producer Barry Wilson announced at the beginning of his weekly editorial last Friday that “yes, rape culture exists,” I was caught off guard. It’s not an admission you often hear from men of his generation, nor of his decidedly conservative bent. Using Donald Trump as a shining example of how victims of assault are often belittled and dismissed, Wilson ended the three-minute segment by repeating “rape culture does exist. Just ask any woman.”

But the dismissal of rape culture is, unfortunately, not the exclusive purview of curmudgeonly white men. Deniers include anti-feminist columnists like the Globe and Mail’s lamentable Margaret Wente and the National Post’s Barbara Kay. And many millennials are just as oblivious as their grandparents’ generation, it seems. As I was researching the term, I was surprised to find that the top five definitions of “rape culture” in the user-rated Urban Dictionary were all written by people (anonymously, of course) who deny its very existence.

The top definition begins with this gem, by “skikaku”: “The literal definition would posit a culture that advocates and normalizes rape, which is blatantly not true of the Western world and why people obviously deny it (because it doesn’t exist).”

The “literal” definition is of course a little more complex than that. The concept was coined in the 1970s and has evolved considerably over four decades. There are various definitions these days, but I think RationalWiki captures it well: “Rape culture is the ways in which a society trivializes, rationalizes or even condones rape and other acts of sexual violence. Rape culture includes a variety of issues from the way raped individuals are treated by police to the way rape is portrayed in fiction and by the media.”

Many definitions emphasize that rape culture is not just about rape but about a continuum of behaviours, attitudes and beliefs. Expressed in a violence pyramid like this one from the “11th Principle: Consent,” you can see how people who defend Trump’s statements about being able to grab women “by the pussy” as mere “locker room talk” are confirming and reinforcing a narrative where expressing fantasies about sexual violence is considered normal.

Ironically, it is often these same people who are the most vehement in their denial that rape culture exists.

As Wilson suggests, if you want to understand how commonplace sexual victimization and degradation remains in our “liberal” western societies, go ask practically any woman, even those who deny the existence of rape culture. Women like Kay and Wente don’t deny that sexual harassment and degradation occur, they just normalize it as part of what you have to learn to put up with as a woman in society. In Wente’s words, rather than acting to punish and denounce the perps, women should learn to “man up.”

This “boys will be boys” attitude trivializes sexual violence and creates the kind of society where many people are more concerned about the fate of their local football team after a player is suspended than they are about the fate of the woman he’s accused of beating or raping. Where a candidate for president of the United States can brag about committing sexual assault, then deny he has ever done it, then attack the women who bravely come forward to contradict him.

As the old saying goes, you can’t solve a problem until you admit you have one. The sooner we stop denying rape culture exists, the sooner we can collectively move forward with solutions, both educational and legal.

To show your solidarity with the victims of sexual assault and your desire for social and political change, come on out to tonight’s #stopculturedeviol demonstration, starting at 5:30 at Place Émilie-Gamelin (Berri-UQAM métro). ■

If you believe you’ve been the victim of sexual assault, you can receive support and guidance from the province’s 24-hour, toll-free hotline at 1-888-933-9007.