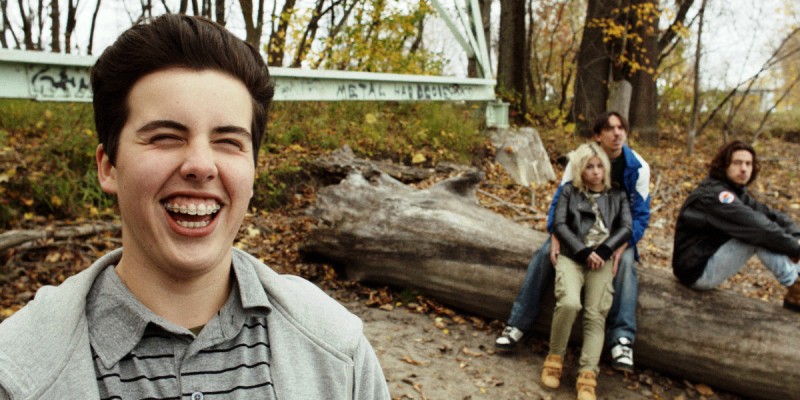 Tuesday afternoon, Parc and Fairmount. I’m wrapping up an interview with Vincent Biron that has gone on longer than either of us had anticipated. As we’re about to say goodbye, a guy walks up behind Biron and says, “Bon film, man!” and walks away.

Granted, it wasn’t the first time Biron was receiving kudos for his first feature, Prank. The previous weekend, it had won the audience prize in the Temps 0 section of Festival du Nouveau Cinéma, rounding out a festival run that saw the film opening at the Venice Film Festival and passing by TIFF before its release this Friday. Pretty impressive for a film with a paltry $25K budget made by some friends with the hope of (as co-writer Eric K. Boulianne put it) at the very least resulting in a burnt DVD for their parents. The team — which also includes two other screenwriters, Alexandre Auger and Marc-Antoine Rioux, and producer Hany Ouichou — also turned some heads on the Venice red carpet when they unfurled the film’s most ostentatious prop: a 20-foot banner of an erect phallus. Suffice to say that Prank isn’t exactly the kind of movie you’d expect to see at a prestigious international festival.

“We thought we’d be more accepted by the Sundance or South by Southwest crowd, for sure,” says Biron. “Then again, we were part of the Critics’ Week. Critics’ Weeks aren’t homogeneous across all the major festivals, but they do go for more leftfield programming choices. At Cannes, they programmed films like It Follows… I can only speak for the Venice programmers, but they’re all cinephiles, but they’re cinephiles who lay claim to a more horizontal type of cinephilia. I don’t see my own cinephilia as a vertical hierarchy and neither do they. Prank is like that, so being in a Critics’ Week, even in a more “intellectual” festival like Venice, makes sense in that this is also cinema. We were surprised at first, but then I grew to understand that they want to put forth programming that promotes that kind of thinking.”

Stéfie (Étienne Galloy) is a chubby, dorky teenager with few friends or hobbies. He spends most of his days playing catch against a brick wall or practising his clarinet (not too difficult, since the piece he plays only requires him to hit the same note very intermittently). A chance encounter with Jean-Sé (Simon Pigeon) and Martin (Alexandre Lavigne) on a playground one day changes that brutally: they need a phone to film a prank, he has a phone to film said prank, and soon the three become partners in crime. Stéfie is the butt of many of his older, stonier friends’ jokes (especially around Martin’s tough-girl girlfriend Léa, played by Constance Massicotte) but they nevertheless offer a social circle that’s more stimulating than throwing a ball against a wall, even if it means taking a shit on a Porsche and hiding in garbage cans with spooky masks on.

Let’s be blunt: there aren’t many movies like Prank being made in Quebec. The reliance on institutional funding and the deeply entrenched film culture means that a project like Prank, which would seem completely at home on the programming slate of one of SXSW or Sundance, feels like a bit of a UFO. “I don’t really subscribe to any preconceived notions of who will like this movie,” explains Biron. “It’s been one of the big revelations of all this. At first, we definitely thought that it would appeal to the 15- to 35-year-old group, but then in Venice a local film critic in his 50s came up to me and told me he loved it. I think he could see in my face that I couldn’t entirely believe it! (…) There are often complaints that Quebec cinema is monotonous. Not that it’s bad, necessarily, but that the films are very similar stylistically. It’s like a monolithic block of aesthetics, and at some point, seeing something that isn’t Aurélie Laflamme or Maudite poutine but somewhere between the two feels original.”

At this point in our conversation, we’ve barely touched on any specifics from the film. Like all filmmakers coming off the festival circuit, Biron is trying not to fall in the trap of repeating the same soundbites over and over again. “I think Prank is a good opportunity to talk about contagious cinephilia and to talk about the way we talk about arthouse cinema in Quebec,” he says. “Arthouse or auteurist cinema has done itself a great disservice in recent years in the way it spoke about itself. We always talk about them as inaccessible works that the general public can’t begin to understand. I mean, anyone can understand Chorus. It’s about a woman mourning the death of her child — everyone can identify with that! But, of course, if you describe it as ‘an austere black-and-white film,’ people will be scared of it.

“I’ve been thinking about this a lot lately,” he continues. “In Quebec, it takes us so long to make our first film because we’re going through institutions, so we end up thinking our first film is something monumentally important, which it is. But when you work on a film for six years and it spends three years in development with SODEC, you feel like you have to make something serious — a ‘festival film,’ so to speak. I think that’s why so many people, over the years, have steered away from making something more off-the-wall. I don’t think it’s done consciously or cynically — and in fact, I almost did that with one of my more serious projects — but I felt like doing something quickly. My father was sick, I wanted to get something up and running quickly, and I also used it as a way to liberate myself from the weight that a first feature holds. I’ve made a wacky but touching comedy — now I can do whatever I want. I don’t have to uphold this image of being a serious filmmaker.”

The film had a somewhat unusual gestation in that it was written by four screenwriters, including Biron. “I don’t necessarily subscribe to the idea that there’s a traditional writing process in any sense,” says Biron. “But it is very different. I did it because I wanted to leave the understood paradigm behind. I decided in May to shoot a movie in September. I had a very basic idea and I wanted a movie with more dialogue. My short films are more in a Stéphane Lafleur or Aki Kaurismaki aesthetic — awkward silences, kitschy, pathetic characters — and I wanted to get out of my comfort zone. So I had this idea, I had a title, I had some characters. I met with the other writers and we pitched ideas. Alexandre Auger wrote the first 70-page draft, and then we relayed the rewrites and the final shooting script was by me. It helped us to experiment with the understood Quebec way of doing things. We make good movies in Quebec, but they’re all made in the same manner, with the same paradigms, which leads to the homogeneous landscape we were talking about before. This is a more of an American approach. I wanted to have something like a writer’s room, where we’d all pitch jokes and the best one makes it in.”

That approach also benefitted the casting. Although the characters feel very organic, the cast (save for Massicotte — “I knew I wanted to work with her; she has a real weird quality about her,” says Biron) is composed of experienced, professional actors. Pigeon and Lavigne are in their early 20s, which makes them considerably older than their characters — or at least older than Stéfie’s character. 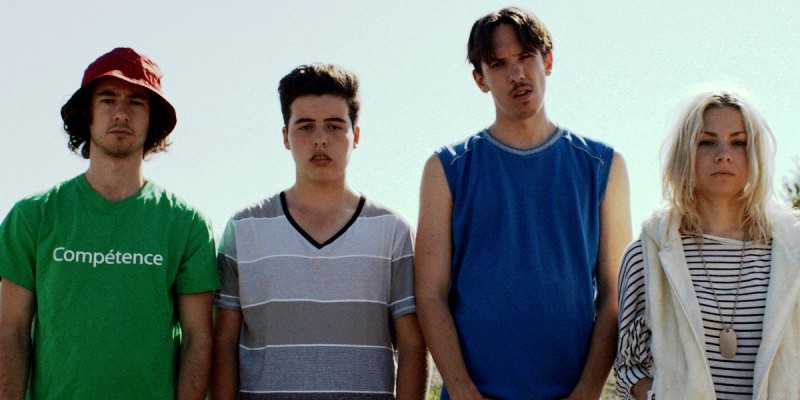 “I had originally shot a day with two young actors who were friends with Étienne, thinking that if it was any good I’d put it in the film,” explains Biron. “They were all his age, which made the crew pretty homogeneous — and it was boring, man. It was really boring, it felt like an afterschool special. First off, it didn’t really resemble my style, since I had shot it all handheld — a bit like the téléroman 30 Vies — and when I looked at the rushes, I just couldn’t see my style in that footage. It had nothing to do with what I loved. So I decided to recast and I thought fuck it, I’ll do it John Hughes-style. I won’t give a shit about the age of the actors, I won’t try to cast people that are exactly the same age as the characters. That’s how I came across Alex and Pigeon, who are just incredible.”

True to his desire to get his first film out of the way painlessly, Biron has already started working on a second film with the same writers and the same creative approach. “Having made one movie now, I feel like re-applying everything I’ve learned about making low-budget movies into the making of this new one,” he explains. “I don’t want it to get bigger. I just want to work the mechanics, the script and the creation process in a more efficient way. (…) I also work as a cinematographer, so I have a first-row seat to all the technicalities that can happen.

“As wonderful as it can be… and I’d love to make a movie with dollies and complicated light set-ups — I saw La La Land in Venice and I thought, ‘I’d REALLY love to do that!’ — but I told myself it was a good idea to remove the pressure of what money can bring for my first film. Money means technical installations, it means limited shooting time, it means you can’t necessarily do something again if you fuck it up the first time. It didn’t happen on Prank, but I’d given myself enough berth to retake a scene if it didn’t work. Part of the impetus of Prank was to free myself of those constraints. It’s also why I acted as my own director of photography, because I knew the second I hired someone, he’d ask for lights, he’d ask for an assistant and so on!”

Does Biron see himself as part of a sea change of sorts in the Quebec cinematic landscape? “Actually, I’ve wanted to say this in an interview. I really like mumblecore,” he says, moving closer to the recorder. “Prank was born out of a desire to replicate what the Duplass brothers and Joe Swanberg were doing, in a sense. Creating a small community where we create things without waiting for money to come. If there’s no money, you make a movie with no budget! (…) It’s my dream, if I ever wind up directing TV, to bring that kind of tone and aesthetic to Quebec television.

“When I say I love mumblecore, I really mean I like the idea behind it. The term itself has taken on other meanings — I mean, V/H/S is technically mumblecore. They just thought, ‘Everything we know about making drama, we’ll apply to making horror,’ and for sure when I mention my love of mumblecore, some people kind of dubiously ask me, ‘So you want to make boring movies about people discussing their dreams?’ No! That’s one movie. Creep with Mark Duplass, Safety Not Guaranteed — those are mumblecore movies. They’re not perfect, but if I made a movie like that, I’d be proud! I just think that a narrative can rely on very minimal technical requirements. That’s what inspires me about mumblecore, particularly because their context is so similar to ours. They had no money, they didn’t want to make movies that looked like what the machine was producing, so they adapted.

“Prank, as far as I’m concerned, is one of the first mumblequeb films (laughs). If anything comes out of this experience, it’s that we can make movies without having the means that Xavier Dolan has and without necessarily aiming to go to so many festivals. I think we’ll start to see more and more of those.” ■

Prank opens in theatres on Oct. 28. The English-subbed version is playing at Cinéma du Parc (3575 Parc).