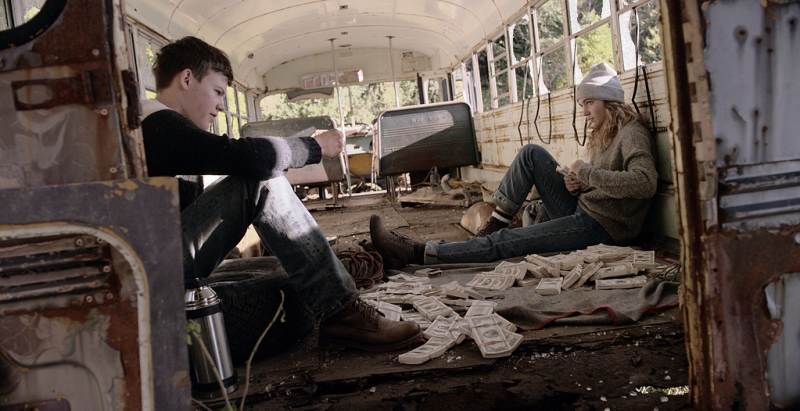 It would be easy to dismiss Nathan Morlando’s Mean Dreams or pigeonhole it based on its summary. It tells the story of Casey Caraway (Sophie Nélisse), a 16-year-old girl who moves to a remote rural region when her sheriff father (Bill Paxton) is transferred there. Existence is pretty lonely out in the sticks (actually Sault Ste. Marie, though the film is intentionally vague on where it is set), but she soon befriends her neighbour Jonas (Josh Wiggins), a high school dropout who now helps his father (Joe Cobden) on the farm. Casey and Jonas begin to lean on each other, finding in the other the rock they didn’t know they needed.

Their budding romance is soon interrupted by Casey’s father’s abusive behaviour. He knocks her around and forbids her from seeing Jonas, a recurring event that also serves to mask the fact that he came to town to conduct some very nefarious corrupt-cop business. Jonas tails him one night only to witness him gun down drug dealers in cold blood and make off with a bag of cash — a bag of cash that Jonas manages to snag, forcing him and Casey to hit the road to avoid her father and his policeman colleague (Colm Feore).

Morlando is adamant: Mean Dreams is a fable. It’s why the setting is kept intentionally vague, and partly why the film doesn’t necessarily read as a “Canadian” film as we generally understand it. “What I wanted to evoke was the fable quality of the love story. It’s a metaphor for first love, right? I didn’t want it to be location-specific or time-specific, so it can be anywhere in North America that would make it more fable-like.”

I bring up the fact that Canadian filmmakers are often criticized for making films that lack a Canadian “identity,” as if this is a requirement for anyone making a film in Canada with Canadian money. “I don’t even know what that is,” says Morlando. “A Canadian novelist doesn’t feel the need to write stories set in Canada. Michael Ondaatje — he just writes stories. I don’t think that as a Canadian filmmaker, I need to set my films in Canada. (…) As an Ontario filmmaker, we’re inundated in a major way by American culture. Ontarian audiences don’t differentiate between American and Canadian films — they just go to the multiplex to see English-language films.”

One of the film’s themes is the powerlessness of teenagers, the feeling of being imprisoned by the fact that you’re not legally free even if you’re forced by circumstances to make very grown-up decisions. That’s a familiar refrain for Nélisse, who works as much (if not more) than any actor of legal age but continues to moonlight as a 16-year-old girl. “I can’t do everything I want, but I think I’m very lucky to have great parents in that respect,” she says. “They understand that they have to let go a little bit, considering what I do. They have a lot of trust in me, and when it comes to work, my mom is always with me. She’s on-set with me, especially when we film outside of Montreal. She’s very good at monitoring me, but she also gives me a lot of freedom that a lot of parents wouldn’t necessarily give to other 16-year-olds.”

Adding to the fable element of the film is the push-and-pull of tension that Morlando brings to the film. This isn’t a tight, pressure-cooker thriller — Mean Dreams moves at its own pace. “My editor is Ron Sanders, who’s edited every Cronenberg film. You know — Eastern Promises, History of Violence were strong references, tonally. I loved how those were handled in terms of tension. Fortunately, I got to work with Ron. That’s what helped me get him, too, that these were part of my references. He hadn’t been paid this little since 1976 — he did it out of passion. I learned a lot about tension from him. You’ve gotta ease off. You’ve got to give audiences relief.”

There’s something of a Montreal connection to Mean Dreams as well (besides, of course, the casting of Nélisse). “Kevin Coughlin and Ryan Grassby, the writers, are both from Montreal,” explains Morlando. “They had send the script to Will Woods, who is one of the producers of the film, and they developed it together. Last April, Will, Ryan and Kevin sent it to me. They had seen my first film (Citizen Gangster, starring Scott Speedman and Kelly Reilly) and liked it, and asked if I would be interested in doing it. My wife, who produces with me, joined as a producer shortly thereafter and together we all made the film. I just received the script via email, so it was very cold. I didn’t know these guys, I didn’t know who they were. I thought ‘Should I look them up?’ before I read it, and then I thought ‘That’s not fair. If someone looked me up, they wouldn’t find much either!’ So what? You’ll know in the first five pages. (…) The whole script was just an amazing page-turner.”

Ever since her breakout role in Monsieur Lazhar, Nélisse has split her career between English and French-language films, moving between big productions like Pawn Sacrifice and smaller indies like Endorphine. I ask her if she sees any difference between acting in French versus English. “Not really in terms of the language of the script, but definitely in terms of the productions,” she says. “In this case, it was a very independent Canadian film with a very small team. On American films I feel like… not like we’re wasting time, necessarily, but we just use up more time. We let things slide; if we screw up, no problem, we can do it again. It’s not as strict. In some cases, it’s very strict, especially in terms of hours worked or things like sex scenes, anything that needs to be regulated, but in terms of time management, it’s very loose. In Quebec, it’s a lot more like a family. I end up working with people I know almost every time, and it really makes me feel at home. (…) But then again, it’s pretty fun to be in an American production where we get to fly around on a private jet!”

“I think indies are more interesting because it feels like everyone really believes in the film,” she says. “You can tell people are there because they want to make a good movie as opposed to a good paycheque. People put all of their efforts in the production. Nathan was so motivated each day, he really put everything he had in this movie. He was really working hard — everyone on the very small team was working super hard. I’ve heard stories about the editor staying four hours longer than he needed to just because he loved the project. (…) Bigger budgets don’t necessarily make better movies.”

But like any movie about young love, Mean Dreams lives and dies by the chemistry of its leads. “Fortunately, they really hit it off — they became really close friends,” says Morlando. “No one has any control over that, whether they like each other off set, in between takes. It was instant in the audition. We did a chemistry read, and they really hit it off. If they naturally hit it off, it’s going to make everything much easier. It’ll make the working experience much more enjoyable and it’s gonna make their relationship even more real, because they’ll be working off real feelings of interest and attraction and caring. That is a wish come true. That’s one thing.”

“The other thing is that we all lived in the Sault, so we lived very isolated lives,” he continues. “They were hanging out — they were buddies off set. Friday, Saturday night, they went to movies together! They had chaperones, of course, and the four of them were a constant team and they all really liked each other, so that was really great. They both had great respect for each other. You know, Sophie’s worked with Geoffrey Rush and Josh had worked with Aaron Paul. Since then he’s worked with JK Simmons and stuff, but they both knew the other actor was good. They had real respect for each other and a real willingness to do whatever it took.” ■