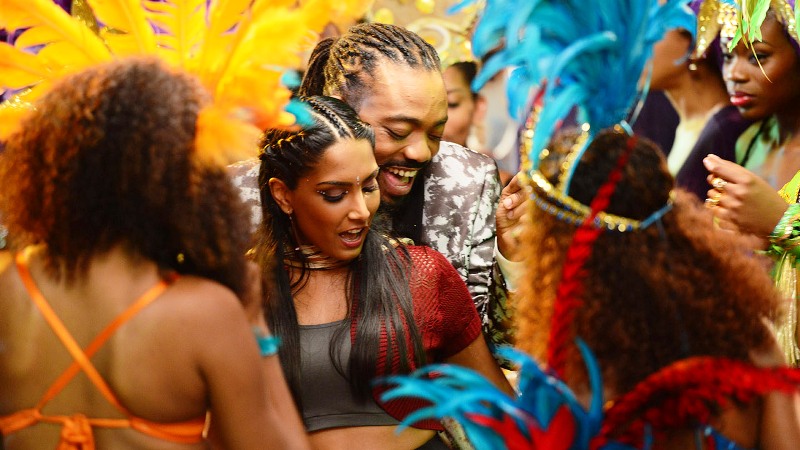 Machel Montano is quite probably the biggest star to come out of Trinidad (unless, I suppose, you count Nicki Minaj, who left as a child). The soca superstar has been repping the immensely popular calypso offshoot since he was a child. Now Montano seeks to conquer the film world with Bazodee, a co-production between the U.S. and Trinidad that marries the romantic traditions of Bollywood with the rhythms of soca and the party spirit of carnival.

Montano plays Lee de Leon, a Trini signer who returns from a trip to London that was meant to be his big break with not much to show for it. Dejected, he considers taking a break from music altogether until he meets Anita Panchouri (Natalie Perera), a young woman who’s smitten enough with his music to join in with his busking when she walks by. Anita is set to marry a rich businessman (Staz Nair) she has little affinity with, but their marriage would lead to a prosperous business partnership between her penniless father (Kabir Bedi) and her filthy-rich father-in-law (Kriss Dosanjh). Anita nevertheless befriends Lee as they attempt to play matchmaker for her cousin (Teneille Newallo) and her future brother-in-law (Rahul Nath). As they spend more time together, Lee and Anita grow closer and closer, putting not only their futures but her family’s survival in danger. 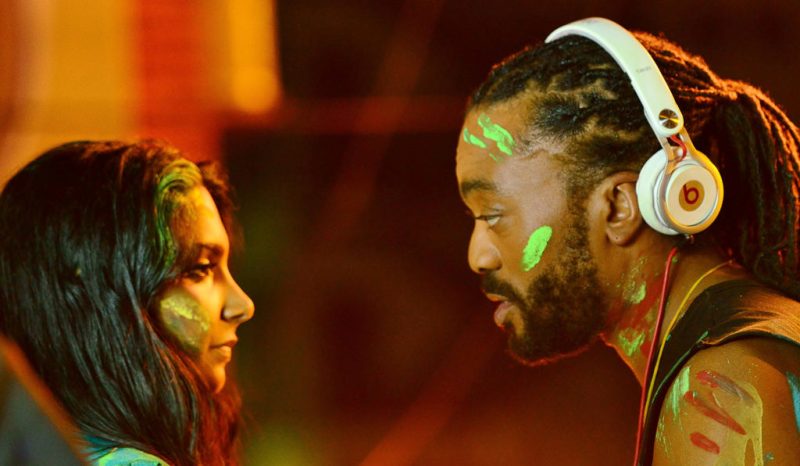 Bazodee (essentially the Trinidadian version of “l’amour fou”) doesn’t only star Montano, it stars Montano’s music, which covers the film from start to finish. That decision, it turns out, was there from the very beginning. “I would say I was kinda involved from inception indirectly,” he explains “The writer and producer were from Trinidad — actually from Tobago, more specifically, and Barbados — and they were fans of my music. They said, ‘Look, we’re fans, we love the concept of your songs and we decided to write this movie starring you and use your songs in the story.’ And I was like, wow, okay! So I said, I was down, you know. I was a little skeptical about accepting to act in the movie. I didn’t know if that was going to happen, but I said yes. (…) I read the script maybe a month after they contacted me, and when I read it I found myself reading on and on to see what would happen. I was really interested in the story, and I became one of the early investors because it took us quite a few years to find the right funding, the right director we wanted, the right leading lady and handpicking the elements to make a perfect sort of mainstream film.”

Montano is credited with writing the Bazodee’s soundtrack, but considering the aforementioned nature of the project and Montano’s incredibly prolific output (he averages an album a year, both solo and with his former band Xtatik), the film could almost be considered a Machel Montano jukebox musical. “Actually, one song was written specifically for the movie, which is ‘I Forget’ and some of the lyrics were adapted from songs that were already there,” Montano explains. “As I said at the beginning, the writer, Claire Ince, was a fan and she kind of put them in the story and worked them into the storyline. It kinda happened organically, you know?” 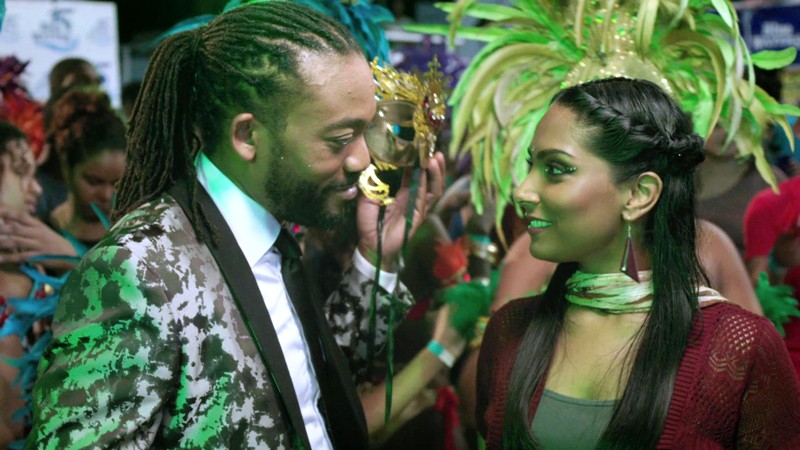 The film is directed by Todd Kessler, an American filmmaker probably best known for creating the children’s TV show Blue’s Clues. I ask Montano if there were any concerns about an American telling a story that is, at its core, very Trinidadian. “He was pretty good about coming to Trinidad and really working with the local people,” says Montano. “He worked close with people like myself who could give him the real truth about whether something was authentic. Having the right people around, we had such a huge amount of the cast and crew that were from Trinidad and Tobago that it was enough to balance the international actors and find the right balance.”

Bazodee is Montano’s first acting role in a film, though a poke around his music videos shows that he’s done some type of acting from the beginning of his career. “I’m kind of like a jack-of-all-trades, now, you know?” he says. “I’m an engineer, I’m a singer, I’m a musician, a producer, a writer… and now an actor! When I jumped into the acting thing I was a little worried to see myself on film. Again, we had the backbone of the storyline and we had such a great cast… What actually kind of saved the day was that we decided to shoot this movie during Trinidad’s Carnival 2015, which was ridiculously hectic. We had to recreate scenes, you know, but keep them authentic and really dance along the schedule of Carnival. So I would leave set and perform in Carnival at night, often until 4 a.m., then I’d have to be on set at 5 a.m. I’d have half an hour to get made up, get my lines fresh… then it was the action call. So there was no time really to slip up or make mistakes. I don’t like to half-step, so I was just jumping up, gunning, doing it really right and stepping up to the plate. You know, you find joy in that.” ■