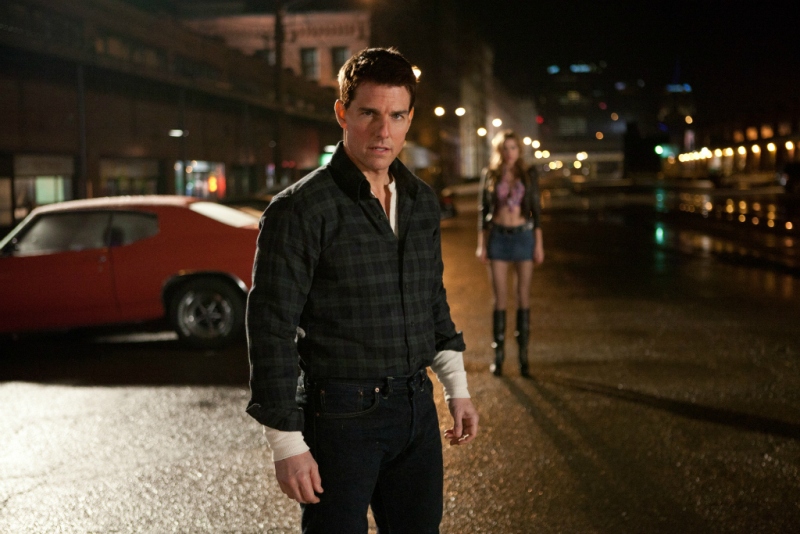 As the media landscape grows increasingly fragmented, Cruise is one of the only true-blue Hollywood movie stars left – and with true-blue movie stardom come true-blue movie star vehicles. It’s a little superfluous that Cruise now heads up two different franchises with plots that could essentially be interchangeable. The origins of Mission Impossible as a TV show and Jack Reacher as a series of novels beloved by dads are pretty far in the past now, but their nature as Tom Cruise vehicles remains very immediate.

So why, exactly, bother with a sequel to Jack Reacher and not Knight and Day, Oblivion or any of the other somewhat underperforming films that Cruise has made in the last decade? As action heroes, there’s not an incredible difference between Cruise’s M:I character Ethan Hunt and Jack Reacher. They’re both government operatives super-skilled at what they do, bounding onto planes and shit and showing almost supernatural skill at destroying bad guys. Ethan Hunt is charismatic and quippy, while Reacher is a thick-necked meathead with pretty poor people skills. Reacher is a more familiar action hero, in other words, getting into the same kind of shenanigans as Hunt, but at a much lower budget.

Jack Reacher: Never Go Back opens with Hunt living the “civilian” life, working not as military police but as an operative under Major Turner (Cobie Smulders), a young hotshot who is rapidly climbing the ranks in the military. Reacher and Turner develop a bit of a thing over the phone, so he pops into her office in Washington to finally meet the voice on the end of the line. When he arrives, however, he finds that Turner has been jailed for espionage in a complicated war case that has resulted in the death of two of her men. Meeting with her lawyer (Robert Catrini), Reacher not only learns that Turner is in some deep shit, but also that a woman he doesn’t remember has asked the government for financial aid in raising her daughter Samantha (Danika Yarosh), whose father she claims is none other than Jack Reacher. Reacher must commit to busting Turner out of jail, meeting his long-lost daughter and clear his name (eventually, everyone must clear their name) before it all goes ever further down the shitter.

Where the original Jack Reacher featured actors like Richard Jenkins, Robert Duvall and Werner Herzog, Jack Reacher: Never Go Back has a guy who was on four episodes of Gossip Girl, a guy from CSI: Miami and T-Bag from Prison Break. It’s a film of considerably lowered stakes in many instances. Jack Reacher doesn’t save the world; Jack Reacher doesn’t parkour through the favela or jump from one helicopter to another. The film’s relatively realistic nature turns out to be its strongest suit, with quasi-minimalistic action scenes (I mean, it’s still Tom Cruise kicking four dudes’ asses pretty effortlessly, but in an enclosed space as opposed to halfway across New Orleans, thwacking ‘em upside the head with an accordion) and somewhat grounded plot. The film is also weirdly concerned with showing us the characters eating. They constantly claim they’re hungry and pause to eat, as if director Edward Zwick and his screenwriters decided that this film was the perfect opportunity to tackle the pet peeve that action heroes don’t often go to the drive-thru, even though real people always need to eat.

Grounded doesn’t automatically equal compelling, however, and the film is frequently more boring than it should be due to the relatively staid and predictable machinations. Every single bad guy (important or not) looks like Chris Evans, every single twist is fairly on the nose (one of Reacher’s key characteristics is that he always does what he says he’s going to do, even if it pops up 20 minutes later while he’s wailing on a totally different bad guy) and the supporting characters are by and large completely anonymous. While these are all pretty much negative traits, it does allow the film to breathe more than your average action movie. It’d be nice if said breathing centred around an interesting character.

It’s difficult, really, to see what the appeal of Reacher as a character is supposed to be. In the books by Lee Child, he’s written as a large, muscle-bound badass who’s very intense, introverted and unemotional – all qualities (except maybe intensity) that Cruise does not have as an actor. Part of Cruise’s true-blue movie stardom is the absence of chameleon-like talent. He’s pretty much Tom Cruise in every movie — but not in this one. Reacher is a fairly uncharismatic, stoic chunk of beef that doesn’t gather much sympathy as the film progresses. I don’t remember the last time I truly thought that Cruise sucked — but there’s really no other way to put it. He’s wooden, he’s boring, he seems completely checked out. Smulders fares much better with an underwritten role that doesn’t have a lot of depth but at least holds its own as an equal partner in the action — she dispatches just as many Evans-looking dudes as Reacher does, if it’s any consolation.

The original Jack Reacher did much better overseas than domestically; the idea of pursuing a franchise was originally scrapped, then revived with what seems like a much more workmanlike, cut-rate film in Never Go Back. This explains a lot: the weirdly contained nature of the action scenes, their relative paucity, the absence of big names in the supporting cast. But it does not explain how bad Cruise is here. (Cruise produced this, and presumably enlisted his Last Samurai co-conspirator Edward Zwick to replace Christopher McQuarrie.) Jack Reacher: Never Go Back has the stink of obligation all over it; it’s everyone showing up and punching in and punching out (and sometimes punching dudes) without much conviction. ■