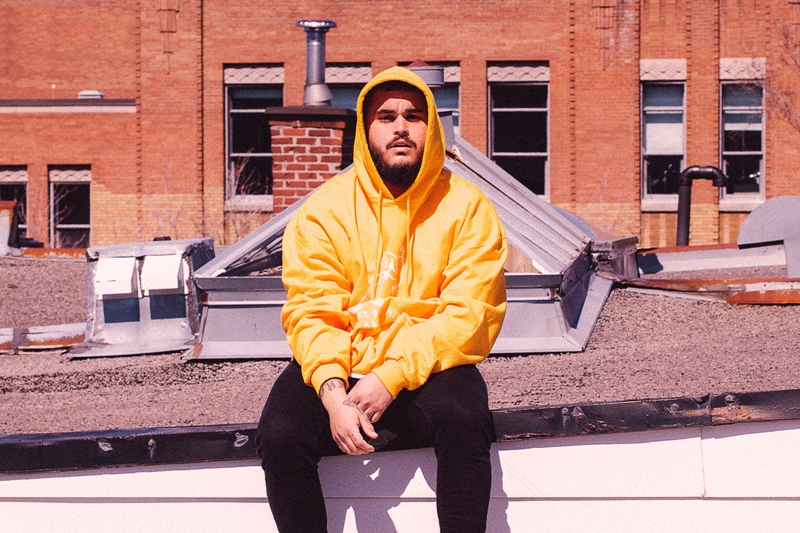 Venezuela-born, Montreal-bred hip hop talent GrandBuda was about to release a record called 1992, in honour of the year of his birth and his life dream of making an LP solo release. But the reality of three other projects with the same title slated for release this year — including the Game’s — forced a last minute switch-up. So instead we have It Happened to Me, on Ghost Club records, a moody, engaging collection of visions and rhythms perfect for the oncoming darkness of fall and winter.

We spoke after his Île Soniq set in August and these are the highlights of what happens to GrandBuda when he’s in his creative space.

“I’m a rapper before a beat producer or a DJ. Music is music. I enjoy rapping because that’s my first love, and I love DJing because I like to make people feel good and dance, and that’s amazing. And I enjoy producing because again, it’s music, and I can have my input. Like, ‘That’s my track.’ Real music and creativity.

“(For this record) I co-produced a couple of track but the whole thing was produced by Max from Prince Club. He’s an amazing artist and an amazing beat maker and he really get what I’m trying to do. Sometimes you work with people and it’s like, ‘This is not happenin’.’ Because we don’t have the same vision or your style is so out there. I had a show at Newspeak a while back and I posted like a 15 second clip on Instagram. He put a comment like, ‘This is dope,’ and I thanked him, and then he hit me up on Facebook and told me he was a beat producer and wanted to work with me. I didn’t know who he was, so I went to his studio. And we spent like 10 hours just talking, showing each other tracks, and from that point, instant connection.

Art in the age of ADHD

“It’s a challenge because you don’t want people to get bored. I love every track, first through last. I don’t want people to just skip it. The challenge is to sit down, work on a track and figure out, ‘Is this too long? Is this okay?’ Because at the same time, I’m making music for myself, and I want to make it good. But you have to think about other people, so you can’t be too selfish, but you can’t be too, like, ‘I’m just gonna make music for the club.’ Or, ‘I’m just gonna make music for people that wanna hear trap,’ or whatever’s cool right now.

The challenge is to mix a bit of what you wanna do, and what people like right now. But you have to finish the record and think it’s really good. If you like it, perfect. If you don’t, that’s okay. Because I listen to a lot of different music, and sometimes I like shit, and sometimes I don’t. Even across an album. I might like an artist but I’ll skip tracks because I don’t like them. And that’s okay. Maybe those three tracks I skip, someone else only plays those and skip the rest.”

“It is dark. I believe music equals emotions. So when you’re sad you’re gonna make something sad. When you wanna go turn up in the club you’re gonna make something with heavy bass. Stuff like that. But for the record, I feel like I’ve been playing many shows, and I had a band, and doing a lot and that was basically, through the whole process of creativity with the band and playing and producing, I found myself on this album. I knew I wanted to make an album eventually, and I believe an album should be whole. So it sounds pretty dark, but it’s something that is actually myself.” ■

It Happened to Me is available now. Listen to the album here: