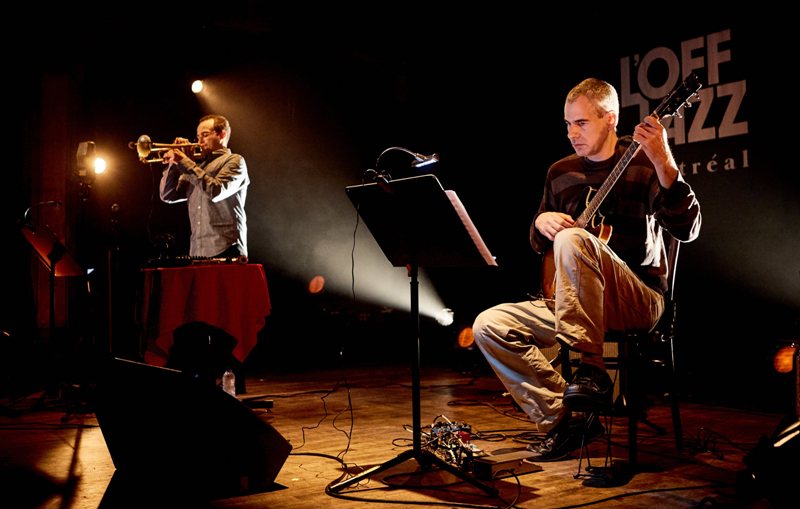 The 17th edition of Montreal’s Off Jazz Festival wrapped this past Sunday, bringing the 10-day event to a close. Here are four of the best shows we saw:

What with the moody drones on guitar and the breathy Shakuhachi-inspired playing on trumpet, this was an hour of poised and transcendent music during which the duo played pieces inspired by the meditative tradition and poetry of the likes of Charles Bukowski and Li Po.

Trumpeter Aaron Shragge, a Montreal who lives in New York City,  and guitarist Ben Monder, a New Yorker well-known to Montreal, played material from their 1st album and their most recent albums. The tunes started either with Monder’s hypnotic arpeggios processed wizard-like through a number of pedals which he impressively mastered or with trumpeter Shragge’s clear and sure tones on his dragon mouth trumpet—an instrument with a slide used to smoothly execute the bends of the kind of music these musicians are exploring.  On a couple of pieces Shragge played some shakuhatchi, a kind of Japanese flute used mostly by monks for mediation practice.

In the original compositions as well as in the traditional piece at the end of the show, the two musicians took their audience into some memorable mental spaces.

The trio of local alto saxist Yves Charuest, bassist Nicolas Caloia and drummer Peter Valsamis was joined by German pianist Georg Graewe for some rough and tumble free improv, everything flowing along beautifully, with textures mostly thick but some nice oases of duos, solos and trios. The guest pianist had a very fluid style, ideas cascading over themselves. Much facility in execution, but at times interaction and variety were minimal. Charuest played in a very thoughtful and expressive manner, however, a nice complement to Caloia’s burly bass and the very crisp and articulate drumming of Valsamis.

Wow what a band! They were a well-oiled machine playing music worth playing like a well-oiled machine. Drummer, composer and bandleader John Hollenbeck’s propulsive melodies and rhythms drove the monster outfit comprised of the small-in-stature-but-gigantic-in-sound Chris Speed on tenor and  clarinet, Drew Gress on bass, Red Wiebenga on accordion and Matt Moran on vibraphone. This band has been together for 18 years and it shows in their play-as-one-unit mode. Compositions from the band’s last two albums were featured, including an excellent piece paying tribute to jazz drummer extraordinaire, Philly Joe Jones. This was, surprisingly, the Claudia Quintet’s first time in Montreal, but now that Hollenbeck has been hired to teach at McGill, we should be getting to hear him pretty often.

On the closing night of l’Off, we got a superb taste of the kind of music that couldn’t have been prepared and performed without grant money, even if just for the size of the band and the nature of the somewhat esoteric aesthetic challenge all involved set up for themselves.

The results were mesmerizing at times, abstract and conceptual at others, but always very varied texturally and timbrally. Mitchell has always been a fascinating musician, best known for his work with the Art Ensemble of Chicago, but he is a giant of contemporary serious music tout-court who at 76 is still doing some of his best work. As for the musical thinking behind the whole thing having originated in the improvisatory act, the audience’s knowing this made overall for a very cerebral, albeit aesthetically amazing experience.

Bringing together some of the best improvising musicians from Montreal and Toronto, this concert was the coming to fruition of Mitchell’s project of creating composed structures based on improvisations. The self-consciousness of the thing was an interesting aspect of the event, as one was made intensely aware of the notion of composition as improvisation and improvisation as composition and the inherent interdependence of the two approaches to creating music. ■