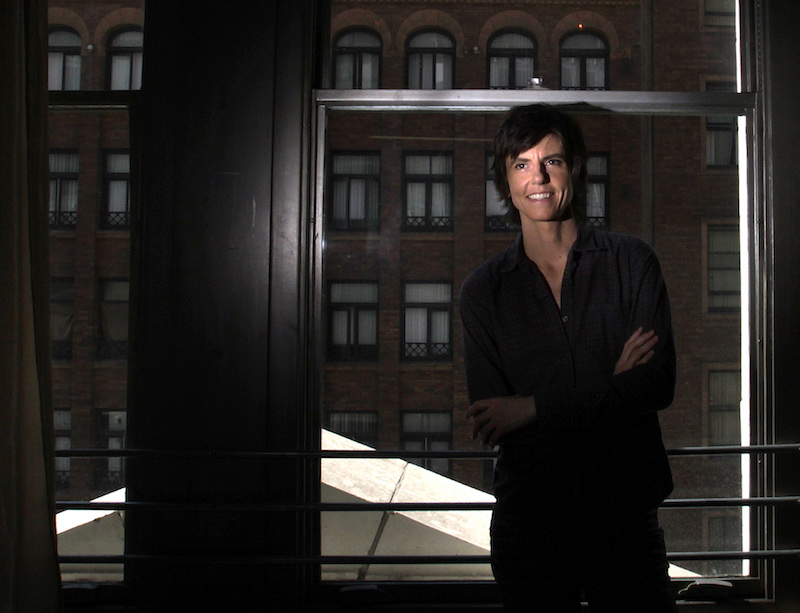 L.A.-based comedian Tig Notaro has had a very busy year. Her book I’m Just a Person, released in June, has made the New York Times bestseller list, her TV series One Mississippi — loosely based on her life and created with Diablo Cody and Louis CK — premiered earlier in September on Amazon Prime to rave reviews, and she got married to her partner Stephanie Allynne, with whom she welcomed twin baby boys just three months ago.

The last time Notaro had such a game-changing year was 2012, a year that was famously difficult for her, during which she experienced a life-threatening infection, the loss of her mother, the break-up of a relationship and a diagnosis of breast cancer, followed by a double-mastectomy. A few days after her diagnosis, Notaro gave a spontaneous, raw and brilliant stand-up performance at L.A.’s Largo club, now known as her “Hello, I have cancer” set (which was later released as an album called Tig Notaro: Live). Her devastating experiences of that year and her survival has provided much of the source material for her above-mentioned book and series.

This week, Notaro launches a tour across Canada and the U.S. with a performance in Montreal this Friday. We caught up with the comedian by phone from L.A. ahead of her performance.

“It feels great to have these projects out,” Notaro says. “They’ve all been in the works over the past four years and I’ve felt really excited and proud of all the material. It’s nice to see that people are connecting to it and responding positively.

“One Mississippi is very loosely based on my life and it’s a very real-feeling kind of show. The comedy is within the moment rather than very joke-heavy, and the drama is very real as well. The cast and directors and writers and everybody was so flawless. It’s truly the show that I wanted to release and I can’t believe that everybody helped me to nail it perfectly how I had hoped.”

Though Notaro’s show and recent book touch heavily on the events of 2012, her stand-up performance is more rooted in her current life. When I ask what the audience can expect to hear during her set though, Notaro can’t quite say for sure.

“There will be some personal stories to some utter silliness to some very improvised moments,” she tells me. “My shows night after night are very different — that’s kind of what makes it fun and keeps me excited to do it. I don’t know half the time what my show will be. It’s really just whatever strikes me in a moment.

“I don’t feel that calculated where I think I have to talk about specific things. It’s really something I stumble upon that I find humour in, and if there’s something important to it, that’s just an added bonus. But if it’s just pure silliness, then that’s what’s going to end up on stage as well, you know? My show isn’t all about personal tragedy or anything, but whenever there is something that’s hard in my life that I talk about, I think I’m usually ready to talk about it when I get on stage.”

Considering the monumental changes Notaro has seen in her life over the past four years, I ask if her approach to comedy has changed as a result.

“I think I’m still roughly the same person to some degree and I have a very similar lens,” she replies. “Maybe it’s turned the dial slightly, but nothing too drastically different. In my personal life it’s changed me in different ways —what’s important and what I spend my time on and things like that — but I think my sense of humour has pretty much stayed the same for the most part. It’s so hard-wired in people what they think is funny. It’s kind of impossible to be a comedian and not find humour in everything around you, really.

“It’s unreal,” Notaro continues about the way her life has turned around since 2012. “Stephanie and I truly just turn to each other several times a day in awe of what we have, and just to be healthy and happy and to have these babies. As much success as I’ve had in my career, it’s great and everything, but it’s really the family and personal life that’s just the most overwhelming joy for me.”

Notaro’s willingness to share both her joys and sorrows on stage and in her writings in such a frank, personal way is one reason her audience is passionate and growing.

“I’m really proud of it all,” says Notaro. “I’ve really gotten some great feedback from people connecting to the stories. I’m very lucky that I’ve had all of these different platforms.”■