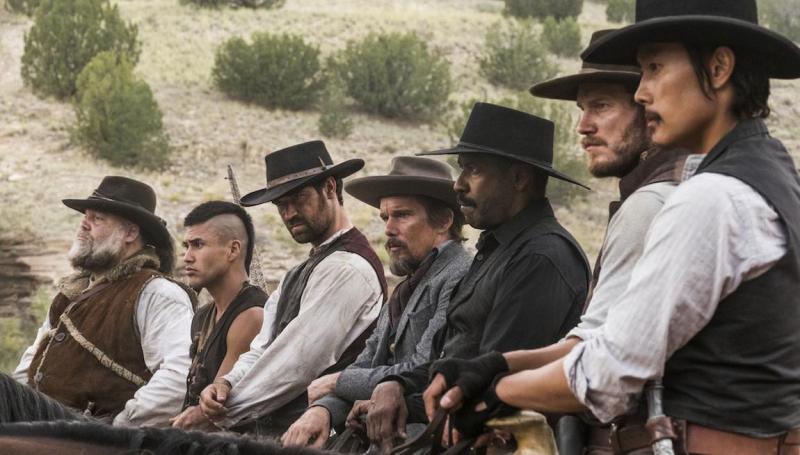 Many have declared the Western a dead genre. It’s true that its popularity has waned considerably since the mid-’70s, a quick look at nearly any movie year since then tells a different story. Studios have managed to bang out a Western every year or so, and that doesn’t even encompass the indies, TV movies and Canadian productions keeping ranches in the Prairies in business even if the final yearly box-office tally is conspicuously 10-gallon-hat-free.

Though there aren’t really exclusive Western stars and main street sets being used year round as there were in the ’50s, it appears that studios aren’t ready to hang up their guns yet. The idea of a remake of The Magnificent Seven isn’t even that blasphemous a concept — the original itself is a remake, after all, and Westerns were always ready to cannibalize themselves for the greater good. But a Western in 2016 is almost inevitably a costly affair, and the failure of big-budget hybrids like The Lone Ranger and Cowboys & Aliens has had an adverse effect on both the purse-strings of the money handlers and the adventurous nature of the filmmakers.

Robber baron Bartholomew Bogue (an extremely slimy Peter Sarsgaard) rules the town of Rose Creek with an iron fist. In an attempt to part the citizens with their gold, he seizes control of the town and begins evicting families and selling their land back to them. Emma Cullen (Haley Bennett) loses her husband to Bogue’s goons and seeks help with Sam Chisolm (Denzel Washington), a highly skilled gun-for-hire who accepts to help even if the people of Rose Creek can hardly afford his services. He rounds up a crew consisting of hard-partying gambler Faraday (Chris Pratt), PTSD-stricken Confederate sharpshooter Goodnight Robichaux (Ethan Hawke), his knife-throwing partner Billy Rocks (Byung-hun Lee), bear-like tracker Jack Horne (Vincent D’Onofrio), poorly sketched token Mexican Vasquez (Manuel Garcia-Rulfo) and Comanche warrior Red Harvest (Martin Sensmeier), and hopes to whip this motley crew in enough of a shape to fend off Bogue and his cronies.

Fuqua’s Magnificent Seven is unmistakably a Western, but it’s also sort of a war epic in the Braveheart/The Patriot tradition, a film somehow centred around seven characters that underwrites all of them but finds the place in its generous 132-minute runtime for at least one superfluous action battle. Chaotic gunfights are the bread-and-butter of this film, and I must say that while they are unnecessarily repetitive, Fuqua knows what he’s doing with these sequences. (People fall out of windows and through tables a lot, which I have to admit was always my favourite aspect of a Western shootout.)

Everyone’s given one or two bits and bobs of backstory (except, I think, for Vasquez, though it’s possible I simply lost track of it in the carnage) and let loose; though it’s nice to see a Mexican cast as a Mexican, a Native American cast as a Native American and so on, the characters are so thinly sketched that it seems almost more like a mnemonic device to help keep track of everyone in the dusty, mud-covered action scenes than a heartfelt attempt at diversity. Ditto the character of Bogue; Sarsgaard does some respectable chewing of the scenery, but he’s in the film so little before the climax that it’s difficult to truly work up some hate for him as a slimy, despicable villain. 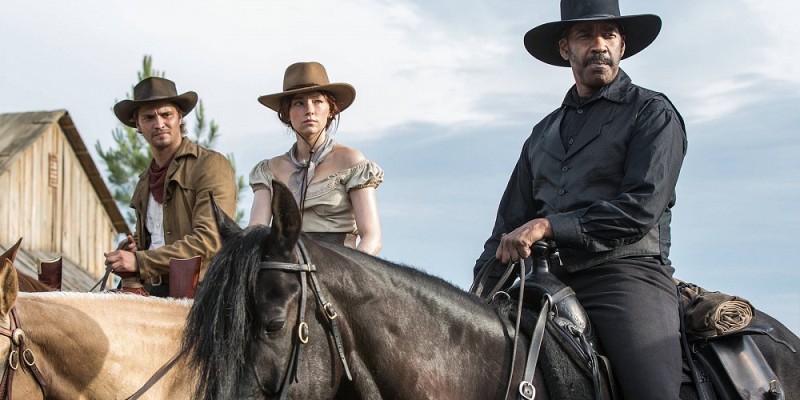 The adherence to character tropes belies the conservative, risk-averse approach to the material favoured by Fuqua. The characters from the original have been modified enough that their fates are not obvious from the get-go to those who have seen the Sturges film (not to mention The Seven Samurai), but the film even removes some of the ambiguity of the villain in the original in order to fully position Bogue as a moustache-twirling, howling vortex of pure evil (no one gets tied to train tracks, surprisingly). The approach is classic Western through-and-through, which jibes rather bizarrely with the cast.

The florid Western language (and let’s be clear, we’re not dealing with Charles Portis or Cormac McCarthy here — though the film is co-written by True Detective’s Nic Pizzolatto, no stranger to overwritten dialogue) feels clunky coming out of the mouths of Washington or Pratt — they don’t so much transform as conform, making the film about a bunch of movie stars with cowboy hats on rather than anything remotely engrossing. It feels, simply, like everyone was keenly aware they were making a Western above simply making a film — like every action, direction and inflection is done with the knowledge that this is not the kind of movie you’d see Chris Pratt in usually.

That’s not an automatic knock against the film. Hell, many John Wayne movies are great precisely because they’re about a movie star with a cowboy hat on, but there’s simply too much quadrant-pleasing and demographic research at play here. The Magnificent Seven is slickly made and the movie stars in it are certainly quite adept at being movie stars, but it’s so boilerplate in its storytelling and so uninspired in its take on the familiar story that it’s unlikely to ever be confused with its predecessor. ■

The Magnificent Seven opens in theatres on Friday, Sept. 22. Watch the trailer here: