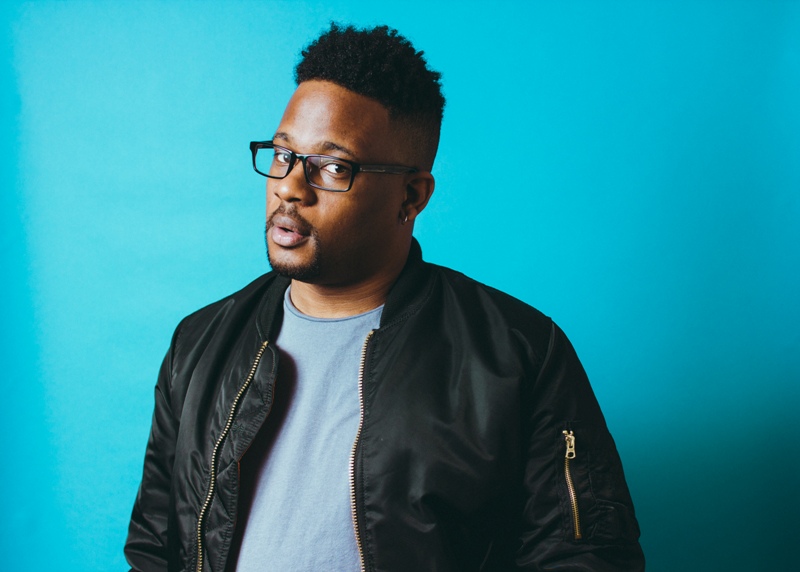 After hearing his latest and most critically acclaimed album to date, Hella Personal Film Festival, indie rap fans are sure to flock to Open Mike Eagle’s current tour. However the L.A. based MC— who will be performing at Newspeak tonight as an opening act for British electronic producer Gold Panda — says that there’s no guarantee he will play one of the most heralded tracks from that new LP.

“I don’t do that song at every show,” he says of “Smiling (Quirky Race Doc),” which features melancholy gospel tinged instrumentation and finds Eagle rapping about white people that avoid smiling at, or making eye contact with, young black men like him due to an unjustified fear. “A lot of fans that come to my shows are white. So I don’t necessarily want to say stuff that raises people’s awareness immediately that I’m a black man performing in a room full of white people.”

Below, he tells us more about such anxious dilemmas, how his background studying psychology informs his lyricism to this day, and the years he spent as a classmate with beloved stand-up Hannibal Buress.

Kyle Mullin: So when is it a good time to perform “Smiling (Quirky Race Doc),” and when do you avoid it?

Open Mike Eagle: I prefer to do it at an in-store performance at record shops or something, where I’m able to talk about every song and provide context in more of an intimate environment, so that I can set the scene. You don’t have that kind of cushion at a dive bar. As much as I’m all about social consciousness, I don’t want people to stop in the middle of a show, after they’ve been drinking, and start thinking about problems that we can’t do anything about.

KM: When you’re at a bar or club, you want to ensure the crowd has a good time?

OME: There’s a certain place I want to take people at a dive bar. It doesn’t need to be perfectly clean and not thoughtful or challenging at all. But there’s a comfort zone for people to hear those subjects.

KM: Speaking of which, Hella Personal Film Festival also has a song “Dive Bar Support Group.” Was it inspired by a lot of the gigs you played at such bars?

OME: I just think that dive bars are places where people get together because they don’t want to go home. It’s not a pretty place. They go with people they know, and they kind of build this community revolving around drinking. So I started thinking about it as a support group, which is an interesting juxtaposition, because you usually think about support groups as something like AA, to help you abstain from alcohol. But people are also drawn to support groups because of the community aspect.

KM: I read that you studied psychology in university. Do you think that still affects thinking and your writing, especially on songs like “Dive Bar Support Group”?

OME: Yeah, I was studying it to try and figure out why people do what they do. And that still powers a lot of the songs that I write.

KM: People who study psychology usually become therapists and try to help people one on one. But maybe you’re doing the same thing on a larger scale, by writing such introspective and therapeutic songs?

OME: It’s definitely something I think about. But I think about it more in terms of trying to relate to people, based on me being very true to my experience. It’s never about trying to purposely create a feeling of goodness for people. If you’re trying to make songs for people you’re just guessing or gambling on what they might enjoy. Whereas I think about how I’m feeling now, then write a song that’s really true to that. And if that’s helpful for people great, and I usually find that it is.

KM: Because your true feelings can be very universal?

OME: Yeah, no matter how unique your problem feels, you’re not alone in it, so it typically helps people.

KM: How do you get feedback from fans about that?

OME: Increasingly social media, because people have a platform to say exactly what they want to say. Whereas at a show it’s more in passing. Increasingly on Tumblr, people are writing posts and saying what it meant to them, “This song or this record got me through this time. It’s always super awesome to hear because you never expect that. Thoughtful as I am, part of me always thinks my songs are kind of dumb, so it’s super cool to get good feedback on that.

KM: A minute ago we mentioned your days studying psychology, and I also read that you were a Residence Advisor (RA) in university at the same school where Hannibal Buress studied. Did you ever have to fine him for noise violations or things like that?

OME: Nah. It is true I was an RA, but what’s not often said is that I was a terrible RA. I was making noise with my students, and doing things we weren’t supposed to do. I wasn’t a good cop. It’s funny, the guys I wrote up were the ones I didn’t like, that pissed me off. Hannibal, on the other hand, was super cool. I was there when he started comedy — we used to sit around listening to comedy records. It’s incredible to see how crazy and huge his career has gotten.

KM: How did it feel when he made the joke about Bill Cosby, and the flurry that ensued? Were you concerned that he’d face some backlash?

OME: I was shocked that there was so much backlash, because I’d seen him do that joke before. I thought it was just him doing observational comedy, and I didn’t know how dangerous it was for him until he told me he’d get ill comments that made him a little worried. I was more surprised than anything, I never thought it would take off quite like that.

KM: Back in 2014 you released a video for your song “The History of Modern Dance,” from your album Dark Comedy, and it was a very obvious homage to the opening theme of The Cosby Show. How does it feel to look back on that video now, after all the scandal that has surrounded Cosby?

OME: It’s a shame with everything that’s happened with him, because it mars the work. It was a very impactful show for me, to see strong black people on television like that. And in the past few years my family and I went back and watched almost the entire series, because I wanted to show it to my son. We did it before all that controversy came out, and while I was watching it I was struck by memories of how into it I used to be.

KM: What do you enjoy most about hosting your Secret Skin podcast?

OME: I enjoy digging into other creators’ creative processes, and understanding what their set of gifts costs them in terms of their social lives. It’s like looking at the mirror image of their public persona and their successes.

KM: Does it help you contend with your own costs?

OME: Yes it does. In most entertainment careers, you get out of it what you put in in terms of time. The time that most successful people put into learning a craft just takes them out of the life experience at times. It sets them up to be very lonely, and they don’t often get to have shared experiences. A lot of people I talk to just spend a ton of time in hotel rooms by themselves during tours. I’m always interested in the psychological ramifications of that, and I really like thinking about what it means long term to have this type of life as opposed to a 9 to 5 job. There’s clear benefits, but understanding the costs is interesting, too. ■