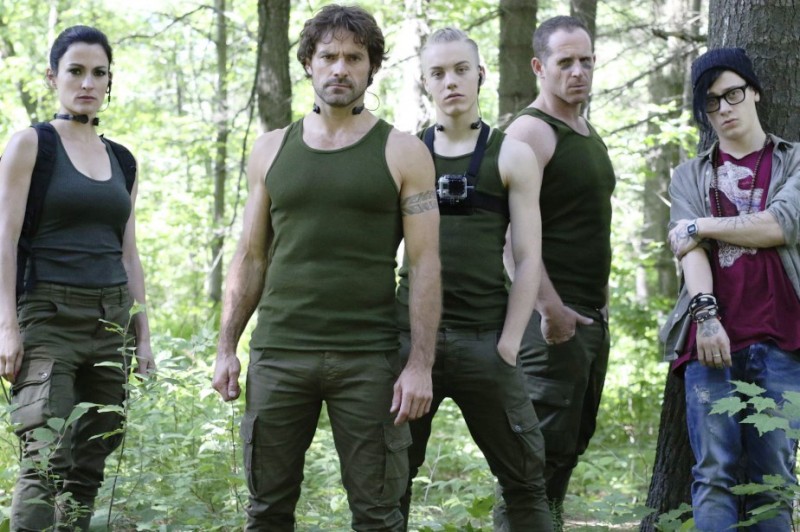 It’s a familiar scene for an action film: a mysterious operative calls upon the hero of our story, who has spent the entire movie thus far jailed. She brings him to an empty room and offers him a gig that he simply can’t refuse: a covert, dubiously legal one that involves high risk, but also high gain as it allows him to be closer to (and work alongside) his estranged son. It’s a scene you’d see in an American action film, except in this case, the principals are film legend Micheline Lanctôt and child-actor-turned-local-A-lister Guillaume Lemay-Thivierge.

A sequel to 2007’s much more car-centric Nitro, Nitro Rush finds Max (Lemay-Thivierge) in jail for murder. His teenage son (Antoine Desrochers) has fallen in with l’Avocat (Andreas Apergis) and his crew, using his hacking skills to collect credit card data and other small scams on a large scale. When l’Avocat’s operation is shut down and his son is arrested, Max decides he has to find a way out. Perhaps uncoincidentally, the prison also needs him on the outside to bust a synthetic drug operation. Needless to say, something is worked out, and Max finds himself on the outside alongside his son, l’Avocat’s thick-necked goon (a scene-stealing Alexandre Goyette) and Daphné (Madeleine Péloquin), the femme fatale who may actually hold more power in this operation than even l’Avocat.

Speaking to the director and the film’s three leads, I brought up how strange it was for me to see actors I knew and a filmic language that I was intimately familiar with in a specific context come together for almost the first time. Though action movies are not a completely foreign entity in the Quebec cinematic landscape, films as deeply rooted in the genre as Nitro Rush are rare — and, truthfully, a little strange to get used to at first.

“Action films are genre films,” says Péloquin. “If the movie were in English, it’d work in the same way. American action movies are so ingrained in our culture that making them here in Quebec French where they’re cast with people we’ve seen play our mothers, it’s a little shocking. Our eyes and ears aren’t quite used to it.”

“Maybe Quebec directors just don’t feel like making action movies,” says Antoine Desrochers. “People in Quebec do seem to want to watch them, which I think is cool. There’s something that I’m proud of having contributed to with this film, which is that even with a lower budget nine years later, the director, the writer, the cast, the producers all dreamed big and made big. That’s something I think everyone should do, in all fields; not just to dream big, but to make big. They assembled people with the right skills — which we have tons of in Quebec — and make a quality film.”

“There’s a start to everything,” says Lemay-Thivierge. “We aren’t very old as a film industry. We follow world trends. The ascent of American action movies with extremely famous movie stars happened slowly, gradually. The way it is now, we consume them without really thinking that any kind of actor at any level can now headline an action movie. It’s something you build upon, but I think it’s normal to have more trouble with it at the beginning because it’s something new. It’s a very familiar language. It’s as if your real-life cousin was also comedian Martin Matte. You see him on stage knowing him only as your uncle’s son and he’s making the crowd laugh — and it takes a while to get used to it.”

You’d think that with action movies being perhaps the most commercially viable of all genres, pitching something like Nitro Rush would make it easier to loosen some pursestrings with the institutions.“Not at all!” says Desrochers. “When I made Gerry, I got $6.2-million. I had $5.3 here, and there was way more stuff to shoot here. (…) We wrote the movie knowing how much budget we were likely to get. We made the first Nitro with a lot more money, but I had a lot less experience making action movies. In this one, I was able to put twice as much action in the film.

“Because so many American films are shot here, we have incredible action expertise in Quebec, more than anywhere,” he continues. “We have outstanding teams. Jean Frenette, our stunt coordinator, he’s in Toronto right now working with Guillermo Del Toro. Americans are flocking here to make movies!”

It’s sort of a rare sight — though Desrochers also directed the upcoming Bon Cop, Bad Cop 2, definitely cementing his status as the most prolific Quebec action director — but it’s even more surprising to learn that the cast did the great majority of their own stunts.

“It was the first time I did a lot of stunts,” explains Desrochers (the director’s son), who appeared in the first film as a small child and now re-emerges a fully grown man. “I did a few kind of fight scenes for TV before, but every time there were stunts, I did them myself, and they weren’t particularly complex. The drifting scene in this one — that’s the biggest stunt I’ve ever done in my life.”

Desrochers is referring to a scene in the film where, during an argument with his father, Theo steps out of a speeding car which then proceeds to “drift” around him. The effect is surreal and dreamlike — and yet the stunt is 100 per cent practical. “Even when I watch it, it doesn’t look quite real,” he says. “For real, though, it’s a lot simpler than it looks. The car isn’t going fast at all — once it starts drifting, it’s practically stationary. It spins on itself, so it goes about 10 km/h. On film it looks much faster since the camera is spinning.”

Having been involved with the first film, Lemay-Thivierge had a hands-on approach to crafting his role (and the subsequent stunts) in the new installment. “I suggested a lot of stuff,” he explains. “Not new stuff that wasn’t in the script, but I took the base of what they had and suggested some alternatives — a little to the left, a little to the right — because I knew that I’d be spending a lot of time working on specific things that wouldn’t necessarily pay off accordingly on screen. We spoke about a lot of elements but I was particularly concerned with realism. I thought it was extremely important that all the stunts be believable. The viewer can’t doubt any of the action. Everything has to be possible.”

If Lemay-Thivierge wasn’t one of the most famous of all Québécois celebrities, you might not mistake him for an action hero. Though clearly in terrific shape, he’s not particularly tall, especially compared with some of the people he ends up going mano a mano with — a fact that the film completely utilizes to its advantage. “I’m often the puppet that gets tossed around in this movie,” he laughs. “We played with that, too; we totally worked my height in. We never tried to fake that I was as tall as anyone else, even if you can pretty easily fake that in film. I don’t really have that ego, first of all, and second of all it helped us weave some street smarts into the film. It’s an inventiveness that doesn’t have to rely on Rambo’s brute force. When he gets decked, he gets decked.”

If Lemay-Thivierge already has some experience under his belt in the action world, the film’s heavy physical requirements were a first for Péloquin. “At first, the character was a vamp and all that, but she didn’t fight or even shoot a gun,” she explains. “I have a background in martial arts and Alain knew that, so the second I was cast, we worked together to make her even badder. I wanted to do stunts, but of course, no one wanted to pass up the opportunity to create a strong female character.”

“We always had a stunt double on set,” she explains. “She was made up and dressed like me and waiting on standby for some scenes. For most of them — the ziplining stuff, the shootouts — I knew I could handle that, so we didn’t even have her around. For the big fight at the end, for example, she stood by ready to do the stunts, but it actually really helped build my confidence for them. She was always with me, advising me during all the takes and I could depend on her in case I wasn’t completely comfortable with a stunt. Turns out I was very comfortable — in fact, I had a lot of fun!”

I ask the director if he was at all stressed out knowing that his leads — and in fact pretty much every speaking role in the film — were doing their own stunts and therefore ostensibly putting the entire production in danger each time. “Yes, but not because of them,” says Desrochers. “I’m always stressed, no matter who’s doing the stunt. People tell me ‘If you choose to make an action movie, you can’t live in fear of the stunts!’ but I can’t help it. (…) It stresses me out, but I also love it — it’s a beautiful challenge.” ■

Nitro Rush is in theatres now (in French only). Watch the trailer here: