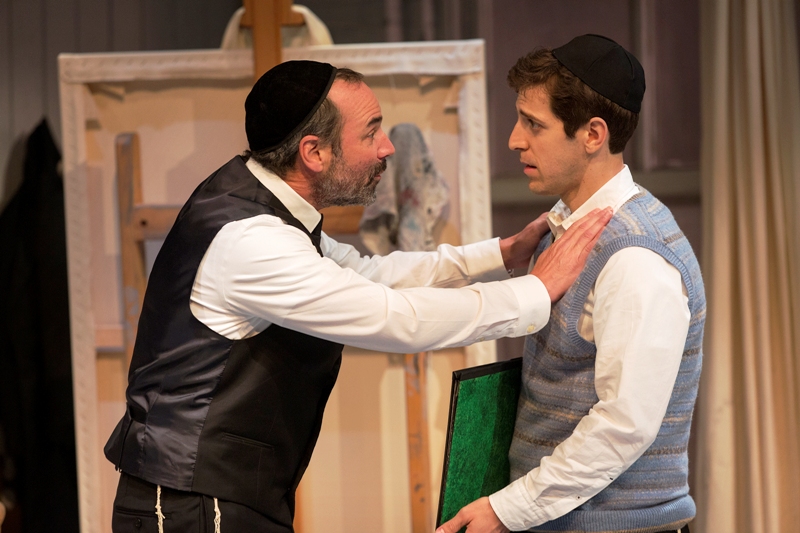 Alex Poch-Goldin and David Reale in My Name Is Asher Lev. Photo by Leslie Schachter

Your kid has a special talent. What do you do to foster it?

Logic suggests you foster that spark with the best teachers and supplies you can afford, and that you nurture your kid with heaps of praise and structure.

But what if their talent goes against the grain of your core beliefs?

Enter My Name Is Asher Lev, the Chaim Potok novel being staged this month at the Segal Centre, in the heart of Montreal’s Jewish community.

The titular narrator recounts his torn relationship between faith and art, and his parents’ dilemma in the insular but supportive world of Hasidic Judaism in 1950s Brooklyn.

Asher sketches preternatural creations from a young age, using cigarette ash at one point to add texture to a portrait.  But Asher’s religion requires devotion to community and Torah, not a canvas and the lifestyle of an artist. As he matures and starts to draw nudes and other forbidden subjects, he has the potential to alienate everyone in his world, and those outside it, too.

Asher’s story has parallels to that of its creator, Potok. Born in 1929, Potok grew up in a religious Orthodox home, but started writing fiction at the age of 16. His education took him to a yeshiva, college, rabbi certification and a PhD in philosophy.

Eventually, Potok grew up away from the strict Judaism he was raised with and settled into a more moderate form conservative Judaism.

“Chaim Potok is writing about that same conflict he had with his father, when he wanted to paint. We can all relate to that intergenerational conflict,” said director Steven Schipper, who will journey home to Winnipeg when the show jumps to the Royal Manitoba Theatre Centre in October.

The soft-spoken Schipper referred to Asher like a flesh-and-blood person, something I noticed while speaking to people about the story, a testament to Potok’s skill.

Asher “is extraordinarily honest. He voices his feelings and thoughts in a way that I wish I could, with a kind of candour and self-critical but clear introspection.”

Schipper directs David Reale of Toronto (you might have seen him down at Théâtre Sainte Catherine with his sketch troupe, Elephant Empire), along with Ellen David and Alex Poch-Goldin filling out the men and women in Asher’s life. The trio act out in a big, white space, meant to be home, studio, school… and a blank canvas. (Look for set designer Martin Ferland’s recurring elements of three on the stage.)

Reale has the challenge of portraying Asher from the age of six to his 20s. The way he describes the story, it sounds like a perfect fit for the “you do you” era.

“Not many people coming to the show are going to be prodigy artists or Orthodox Jews from New York. But everyone is an individual. And this is about investing in your individuality, and the conflict that comes from that.”

American playwright Aaron Posner adapted the book for the stage, and The New York Times described the Off-Broadway show, which debuted in 2012, as “heartfelt” while acknowledging that the earnest battle between faith and art was slightly “old-fashioned.”

Sure, the struggle might seem like a fusty, antiquated battlefield in 2016. But earlier this month, national newspapers carried the story of a Toronto father who defiantly drove to his kids’ school and brought the three kids home for an hour or so in the middle of the day.

Why? He protested that mandatory music classes violated their Muslim faith.

One can only hope that all the Ashers out there today can get their hands on Potok’s book and know they’re not alone. ■

My Name is Asher Lev is at the Segal Centre (5170 Côte-Ste-Catherine) until Oct. 2. See the detailed schedule and buy tickets on the theatre’s website.