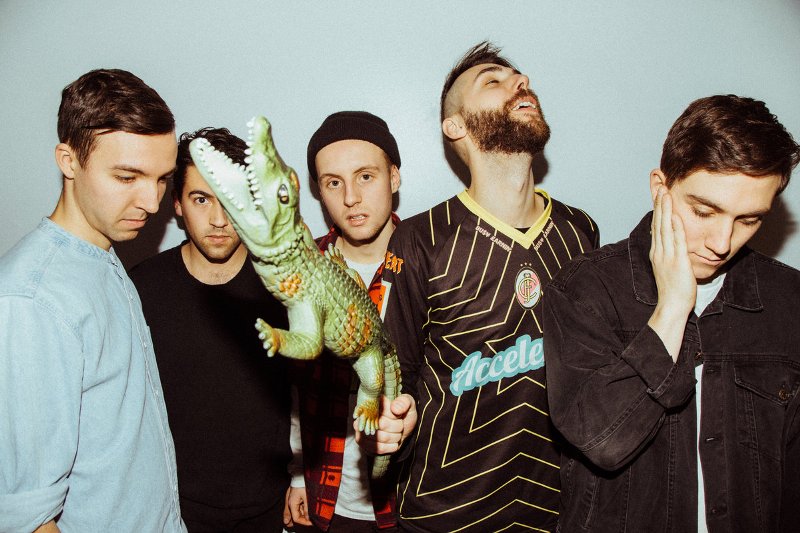 Indica Records is drawn to artists who are energetic live and Foreign Diplomats are no exception.  Their blistering indie rock makes for a rambunctious, fun atmosphere, suitable for any sized crowd.  Since the release of their first album in 2015, the group has been amassing a much larger following and the combination of some big Canadian festivals and an upcoming world tour makes international success seem imminent.

I got the chance to sit down with lead singer Élie Raymond at the FME festival in Rouyn-Noranda to talk shop in the middle of touring season.  Check out his thoughts on live shows and the songwriting process below:

Donovan Burtan: Between Osheaga and your upcoming European tour, it’s shaping up to be a big summer for you guys.  Do you want to talk about it a bit?

Élie Raymond: We’ve had huge shows this summer, like you said Osheaga as well as Festival d’été de Québec — all these shows really went well because we’re working so hard and we’re always practising and it’s paying off.  We’re leaving for Europe in 10 days and after that we’re going to Mexico, and like our manager said, “After that you’re gonna have to come back to Earth” because there’s not a lot of shows there so when one pops up, everybody gets excited.  It’s going to be tiring but it’s what we want to do — it’s what we love.

DB: Is this going to be the band’s first time leaving Canada?

ER: We went to France last fall, but for two weeks and we only had two shows so we hung out a lot. The shows were really good so I think we have some people that are waiting for us there. We’re not just going there without knowing who’s going to be there.

DB: Your music is really suited for the live setting — do you think the bigger venues have benefitted your performance skills?

ER: As the front man, I am more comfortable saying things to the audience.  When you’re in a smaller venue, and there’s like 10 people there, it’s harder to connect, but the larger venues have changed how we interact with the people. We also try to make the bigger shows feel like we’re in a really small venue, really intimate.

DB: I like the collective style of your music, like on “Queen + King” four of you guys were jumping on the microphone and you’re all singing together.  Do you think touring together has brought you guys closer?

ER: Probably.  We’ve always been close, but touring makes our mood really good.  When we don’t have any shows coming up and we’re just practising for nothing, the mood suffers and we fight, but touring and doing a lot of good shows, we have so much fun together so the collective style is really there and getting better and better.

DB: You guys have a pretty wide ranging sound, you jump from folk music to more rock sounds and even some dance synths — do you think being from Montreal has driven this?

ER: I wouldn’t say Montreal is the direct influence. I know the scene in Montreal and we have bands that are our friends that we listen to, but I always try to go somewhere else to find inspiration for the songs I write. I’ll sometimes listen to country for a month — just country. Actually, we just went into the studio to record some demos and there’s a little bit of country on those. We always try to play with what we have and not think about how it’s going to translate live or if it’s our sound.

DB: So it’s more about listening to a lot of different genres.

ER: Yeah, more so than being out in Montreal and listening to the different bands.  I love the scene in Montreal, but I don’t want people to say that we sound like a Montreal band.  I don’t think anyone wants to be caged in the sound of a city.

DB: So this tour is going to be good for inspiration.