Daina Ashbee is the choreographer of a new dance piece called Pour, featuring dancer Paige Culley of Compagnie Marie Chouinard. Focusing on “sensations of cycles, tradition, destruction,” Ashbee moves from her own pain to looking at larger global challenges to seek the vulnerability that needs to be addressed. Abstracting ideas of the cycles of female reproduction and the cycles of the traditional seal hunt, Ashbee’s choreography searches for something transformative, employing glacial beauty, exposing beauty’s limits and striving to elicit a new sensation in spectators of the world unfolding around them.

James Oscar: A recent three-minute performance you did featured  a darkened, empty stage, with unseen people in the audience hitting the wooden audience seats, varying between violent, steady and melodic beats. Whose missing bodies and voices are we watching and hearing in this piece?
Daina Ashbee: It was a dancer (Emilie Morin) and she was hitting against the platform rhythmically. It seems like you had your own experience and your own story, which is what I was going for. It was not about a specific missing body but it was an abstract work that stimulates people’s own experience. That’s what I am going for in all my work. I always begin with research, then the writing…As I develop the piece, I allow myself to be inspired by other things — like imagery, cinema, similar topics — and I really make it abstract and let my subconscious create the work. Once I ‘m working with the dancer, my subconscious, my intuition… I am really trying to get a certain sensation rather than tell a story so that everyone has their own experiences come up.

JO: Your work often refers to the issue of missing and murdered indigenous women. The violent percussion made me think of the violence being waged on them.
DA: It is beautiful that you made that connection. I did not have that very much in mind with that piece but it certainly is part of the trajectory of my work. My first work, Unrelated, is about the missing and murdered indigenous women, and I had the same hitting, clapping in that, but the rhythm was a bit slower, the same insistent beat. So yes it is an evolution of that idea and I have worked with that in my last three works — women’s issues and bodies — and there’s always an element of violence.

JO: The philosopher Achille Mbembe talks about the necessity of revealing our vulnerabilities. Could it be that when some look at this three-minute piece, they start to think about something missing in their own lives, looking at the empty stage and haunting loud hitting of the seats behind them. Would you say your work pushes people to open up to vulnerability?
DA: Yes, because the spectators have an expectation, waiting for something on the stage, and when it doesn’t happen it puts them in a vulnerable position. And it’s really subtle but it certainly is a sensation that probably a lot of people had. I am definitely using techniques to make the audience just as vulnerable as the performer. In a previous work, I had the audience facing each other and the whole piece is based on her pelvis and watching very intimate movements of her pelvis specifically. And the only place you can really look is her pelvis. And so it’s about watching each other, watching this very intimate, vulnerable piece unfold.

In Unrelated, the first decision we needed to make was that the dancers needed to be nude. No question about it. That for me was the first layer of vulnerability the performers need to have in order to represent how vulnerable aboriginal women are. A lot of my stuff is about insistence and duration and repetition. With a time constraint, you can accentuate something that is really insistent. 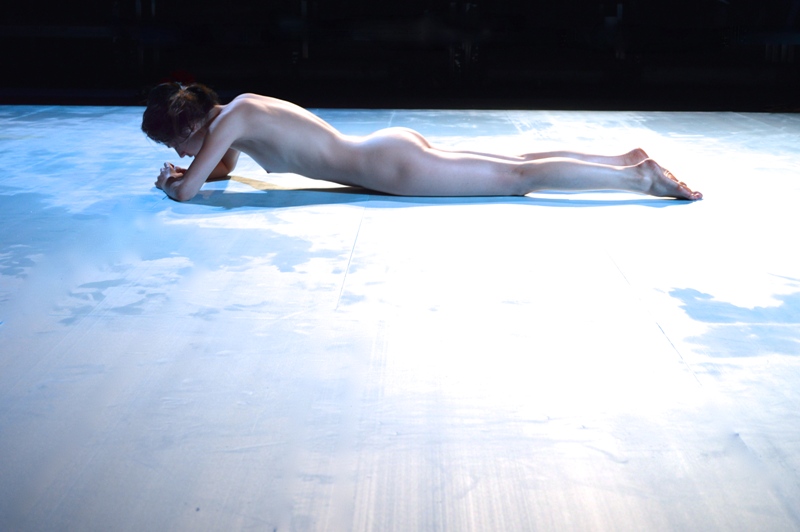 JO: The piece coming up at la Chapelle is called Pour. One can pour in a controlled, steady manner, in a frenzied manner, like Jackson Pollock, or in a violent way. Will we see these three characteristics from your past work in Pour?
DA: I would use different  names to describe these: dripping, splashing and control. A big one for me is spilling. Just opening and spilling versus what we contain, keep in. Control as in what we hold in our bodies. You can see it in the way the dancer walks on the slippery floor, controlling the timing. In other sections, there is no timing at all. So yes, in the timing there are things that are precise and controlled and things that let the dancer flow and find the end of a sequence, then transcend to the next moment. There’s an element of trance — repetition builds to trance. There’s control, there’s silence, there’s things that need to be banged on, frenzy. There is just going inside and whatever comes up, comes up. Not holding anything back.

The violence is something that is really inherent in my body. I was lucky throughout three years in contemporary dance, the violence came out in improvisation — the desire to fall, to hit myself, to hit myself against the wall. Frustration, a need to self-destruct, to deconstruct, to destroy myself. And when I compare what I was doing in my life at the time to those times improvising, it really matches. I had an eating disorder. I had been anorexic. All my work around that was about why I wanted to deny myself. Why I had to suffer in order to be good enough. I had to punish myself to feel as good as the people around me who I was comparing myself to .

It was like a punishment. It really is violent. Anorexia and bulimia are really violent acts towards your body. I knew I had to utilize this violence in my body to talk about something that was important to me. That’s how I linked the issue of the missing and murdered indigenous women to the violence in my body. Was I going to go on stage and be violent against my body and talk about myself or was there a way to relate it to a bigger metaphor? These stories of these women were coming up around that time. It was about experiencing sensations everyone has a reaction to.

JO: Menstruation is something you are going to be dealing with in Pour. For men, this often seems like a hidden realm. Some might see it as something sacred — the spontaneous production of fluids. In the program you speak about “sensations of cycles, tradition, destruction.” How will we see all this in Pour?

DA: We will see a very diluted result of complex research that I’ve done on cycles, the destruction of cycles. When I talk about tradition, it leads to menstruation but it also leads to cycles I was researching. Everything seems to connect. Just comparing opposites. Just to look at  blood — life and death. Ice and water — to retain a fluid or let it out; stillness, moving energy.

When I started really thinking about ice, I started looking for images of ice. What came up were seals on the ice and it just made perfect sense to me that I was done with the portion of research on menstruation and my own body, and then I thought of the seal hunt. Through research I started to understand the differences between the commercialized seal hunt and the traditional practices of the seal hunt, how a tradition like that could be destroyed and enter into a profit-based practice and how it destroys those people who rely on that tradition.

I realized, taking photos of a dancer bleeding, trying to understand the different textures of blood and the different feelings of pain in the body, this new image of seal hunting became really pertinent to my research and allowed me to kind of abstract the idea of menstruation. It was less literal for me and the performer became less a woman and more an animal. The core of all this was reproduction, life, mother nature. So I put images as filters on top of seal hunt, on top of ice, water. You can see blood freezing on ice, withholding menstrual blood, because it’s not accepted in our society. You can think about it as a natural cycle as killing a seal for your needs. But when we destroy that tradition by trying to make profit….

JO: How would someone who comes to your piece look towards some kind of transformation in all this?

DA: In Pour, I wanted to learn about transformation through repetition, repetition towards trance and then trance can take us somewhere else. I see transformation in these pieces. It’s the way I create vulnerability in the piece with the performer and the spectator so that you feel more involved. ■