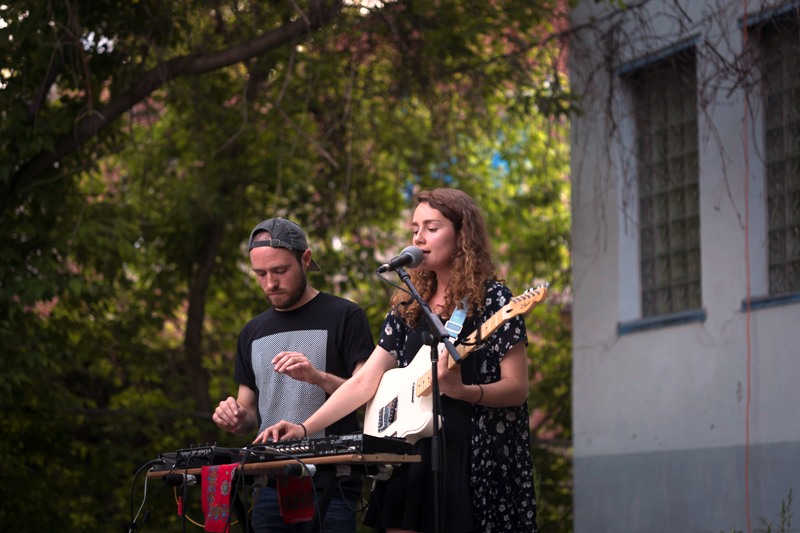 Best Fern began — in what might be the most Montreal way possible — with two neighbours creating ambient synth jams in Mile End. As time moved on, complete song structures emerged from the spacey phrasing until the duo released an online EP only a few weeks ago. Floating vocal melodies and aquatic rhythmic synths create a minimalistic intimacy that gently graces the ear drums throughout the project. Having only started about nine months ago, the duo is already on their way to success with a joint tape launch with fellow Oh Hi music collective band Loon this week and a POP Montreal gig in support of Angel Olsen on the way.

Read into their thoughts on songwriting, live performances and music communities in my interview below:

Donovan Burtan: As you guys described it, the project emerged from ambient jam sessions. How did that progress from the bare beginnings into more complete song structures?

Alexia Avina: Breakfast! Just kidding, every article has mentioned ambient jams and breakfast because I had one quote on it and now it’s this on-going joke. Anyway the question is how did it take fuller shape?

DB: Yeah, how did the music progress? How did you create song structures out of jam sessions?

AA: I get very attached to song structures, so in the beginning it was hard to get out of the jams where it was very loose. It was really from playing live that we caught on to more repetition.

Nick Schofield: Basically we were having these evening jam sessions and seeing what would happen. Alexia looping her voice and guitar, me on a synthesizer. I’m really into letting songs develop out of pure improvisation and pretty much recording everything that happens, later going into those sessions and finding little nuggets from our first jam session that can be sampled. Then it became the next level of jamming.

AA: I just wanted to add on to that, taking little nuggets of things. It’s interesting, for instance, sometimes even in our lyrics. A lot of times a word or phrase will come up just from something that sounded like words. Like in “Lay It on Me,” the phrase “lay it on me” was just a reversed phrase that sounded like those words.

DB: As the observer, I find that there’s this delicacy to it, are there certain nights where it’s still an improvised feel or has it been committed to really specific structures?

NS: There’s a pretty good underlying structure that we’re comfortable with now, but there are very open sections as well. Guitar looping, vocal looping and tape delay from the synthesizer is always going to be a little bit different, which makes us play much more responsively to the environment.

DB: You guys have played a lot in smaller places and I think the music is reflective of that. Do you think there will be challenges when you’re faced with bigger crowds?

NS: That’s true, we’ve stuck to smaller places like Bad Lunch and the Plant and we do like to set an intimate environment when we’re playing and it’s going to be a challenge to play our music in a bigger venue like the Rialto and I kind of welcome the opportunity to draw people in and set a reverent tone in the space.

DB: So you just mentioned the Rialto — do you want to talk a bit about your big POP Montreal gig coming up?

AA: We’re really stoked. I just don’t know how this is happening, but we’re both fans of Angel Olsen and Rodrigo Amarante — he used to be my winter or fall soundtrack two years ago, I was just listening to him every day.  It’s really an honour to be playing with both of these people.

NS: We’re very thankful particularly to Blue Skies Turn Black, who are taking a chance on us considering that we’ve only been around for about nine months.  I just hope my mom can be there.

DB: That’s a nice aspect of POP Montreal, that there’s a concerted effort to match up big names who are coming into town with Montreal artists who embody some of the same sounds.

NS: Yeah, I have always noticed POP Montreal bridging connections between more internationally acclaimed artists that are already established with up and coming groups that might never have the chance to play with them in normal gig situations.  I know Psychic TV and Lungbutter is a big gig for Lungbutter.

DB: You’re co-releasing a project with Loon and this is all sort of a product of the Oh Hi collective. What musical choices have been a result of this collective?

NS: Yeah, Oh Hi just released its second compilation album and it’s kind of just progressing on its own terms. We’re not trying to force anything but a lot of people have been inspired to put on shows together. This release is just a continuation of that. I’m genuinely a fan of Loon’s music, so it felt like a worthwhile risk to take.  It was just a project to push our groups forward.

DB: Loon is also a bit of a new project. Do you think it will be helpful to both your projects?

NS: Yeah just as much as we want people to discover our music, we’re happy for others to discover Loon as well.  It’s in the nature of Oh Hi that we want to build up more attention surrounding the interconnected projects.

AA: I just want to say that Loon is one of my favourite Montreal groups, I think they’re groundbreaking. ■