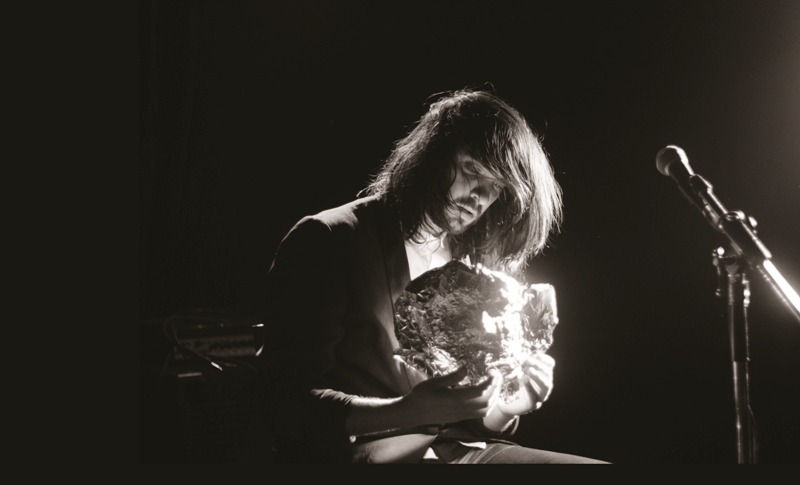 Since his music project Bernhari first saw the light of day two years ago, Alexandre Bernhari and his band have been making music characterized by a cinematic quality. Recently, following the May release of their second record, Île Jésus (on Audiogram), Bernhari has had the opportunity to pair his rock soundscapes with visuals, first in a series of music videos, and now with a special live show to be performed in Montreal this week.

“I think I’ve always wanted to be a filmmaker but I ended up in music,” says Bernhari, who directed the band’s music videos himself. Even the spark that led to the sonic conception of the new album was a cinematic one, via David Lynch’s go-to soundtrack composer.

“It started from a synthesizer sound that sounded like a song by (Angelo) Badalamenti — we worked together based on that, which was different from the first record, where I brought in the songs and the band collaborated on the arrangements,” he says. The band includes Chocolat’s Emmanuel Ethier (who played guitar and produced both Île Jésus and the previous record, Bernhari) and drummers Olivier Fairfield (of Timber Timbre) and current live drummer Francis Mineau (formerly of Malajube).

Bernhari welcomed the opportunity to make music videos, using familiar locations in the north shore to bring some nightmarish imagery to life.

“They were shot in Laval and St-Eustache — I lived there for awhile and there’s a weird quality in la banlieue; I tried to capture that mood.

“I don’t know how it happens in my head,” he says when asked about his influences, “but I’m definitely a movie fan. What’s really rewarding about making videos, for me, is when you imagine something and then you get to see it in front of you. In ‘Toujours Toujours,’ there’s an actor portraying death, and the blue and red light that comes from the corner — I had it in my head and to see it was just fantastic.”

“Toujours Toujours” (scroll down to watch the video) was the second video in a trilogy, so expect a third part sometime in the near future. The name of that particular Bernhari song is being used as the title for the band’s show at la Sala Rossa this week, co-conceived by Philippe Boutin, a young star of the Quebec theatre world.

“I went to see his last show, Le Vin Herbé, with 30 actors in a really big space. Before that he did Détruire nous allons … in a football field with 60 comedians — he does these extraordinary large-scale events.”

Though the details of the show’s contents remain under wraps, Bernhari said that it features live performers, film elements and cameras, as well as specially crafted set-list of Bernhari songs.

“We tried to keep the rhythm good. Philippe Boutin worked a lot on the pacing. For him, the beginning and the end were the most important parts, and in the middle we’re kind of jazzing around.”

At the moment, Toujours Toujours is intended to be a one-time event, but Bernhari is hoping for an encore, perhaps at a future event like the 2017 edition of les FrancoFolies.

“I’ve seen a lot of shows at la Sala Rossa, but this is gonna be different. We rehearsed there yesterday and it’s gonna be fun. It’s a different approach to a music show and it’s a challenge for me but I love that. I can’t wait.” ■