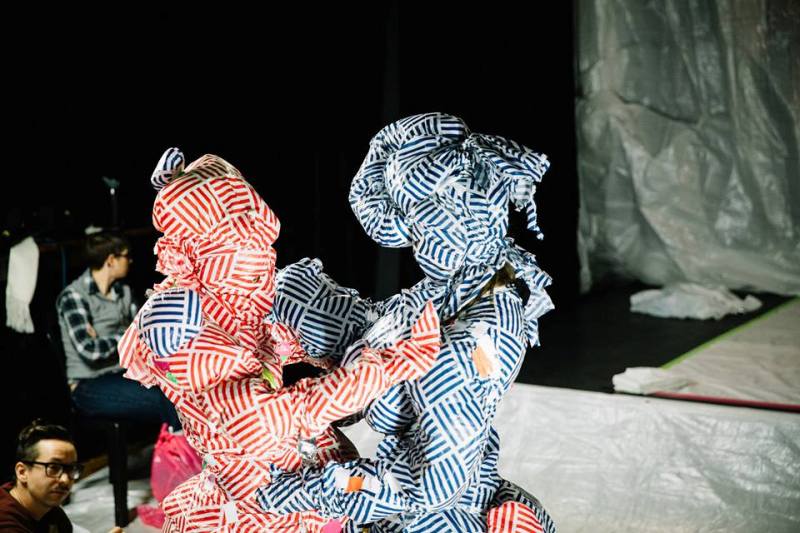 Andrew Tay choreography from the Rhubarb Festival in Toronto. Photos by Connie Tseng

After spotting Andrew Tay at the coolest Montreal spots last year, like Marconi Plaza, Never Apart and a series of dance events, I saw him this summer curating and performing at one of the most interesting experimental dance/theatre events, Toronto’s underground performance/party festival Dance Community Love In. Tay went on to win the top prize at the prestigious Victoria Danceworks festival for his piece “Fame, Prayer Eating.” I wondered,  “Who the hell is this guy?” Well, Tay runs his own Montreal dance company called wants&needs dance, with the equally cool Sasha Kleinplatz, and as it turns out, he’ll be dancing, teaching and choreographing at several  Montreal dance/theatre venues this fall and winter.

Tay kicks it off on this week at Théâtre la Chapelle, presenting 30 artists in his Short & Sweet series.

James Oscar: Based on the pieces of yours that I’ve seen, it seems like you’re interested in and waiting or listening for frequencies like a conductor. You tell people to text you while on stage; you wait and listen for texts. You did this in a previous edition of your Short & Sweet series, where you were dressed in a radiant, frilled animal costume.
Andrew Tay: Yeah the shamanistic dollar store costume. I am definitely into searching in the moment and trying to set up conditions where the tasks are maybe set but I have no preconceived notion of where the thing is going to go. In this way, there is an intense listening  to what is actually happening now, and then as I see it,  where I can make it go in that moment. Each time it will be different and I see new things. This is important to me in my work right now.

The cell phone thing I’ve been using in a couple of my works. In the work at Usine C, it will be the entire soundtrack. In this work. I imagine turning my body into a conduit for desires, or if I want to give an even cheesier metaphor, it’s like a wishing well of some kind. Near the beginning of the work, there’s a huge banner that says, “What the fuck do you want?”  There’s a phone number to text…people’s texts are read through a kind of robotic voice with all the pinging, and different things start to happen every time because people start to have conversations between the different texts that are going on, and then there is obviously the relationship of what people are saying to what is actually happening in the space- all these kind of synchronicity things end up happening no matter what.

A lot of my work is also thinking about spirituality and how we access it today. I find it interesting when I start to use the text messages. It goes through different phases where people write silly things, write really political things. But what I find is interesting is that it becomes deep, but never that deep. 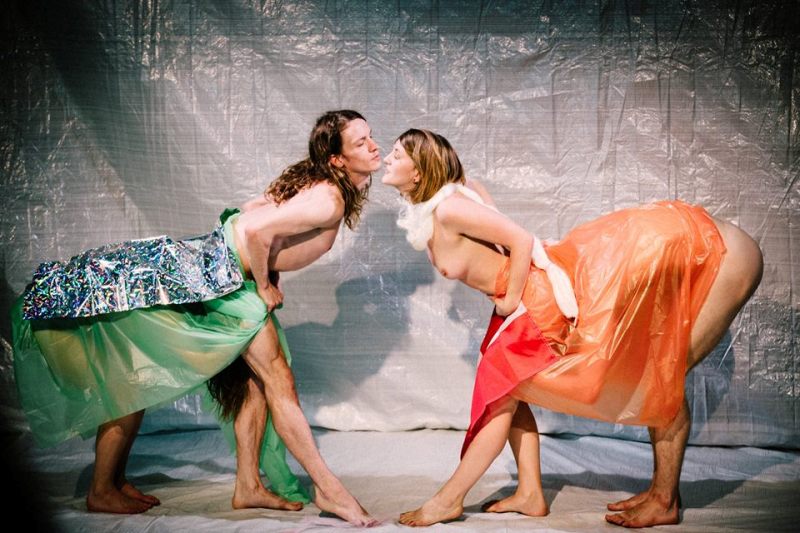 JO: It seems like you’re moving between a border of being irreverent and serious.
AT: What I aim for is a space where things can be extremely important and at the same time superficial, with no hierarchy between the two. To me this is a very destabilizing and weird kind of space, and I really like it. Like making things that are not important super important, and then breaking them down again so they’re crappy. I just read a tiny review of my last work and they called it “casually brutal.” I go and see a lot of contemporary dance work where there is this “brutality” — so serious, everyone is tortured — and this is all good and I like to use things like that, but I use it more as material, where it actually becomes more of an effect. I think this allows people to have more access to it.

JO: It makes us really think about the kind of “hubris” or power game that can become part of contemporary dance and art when you impose this seriousness. I was thinking about this video “Vagina Power” by Alexyss Tylor.
AT: Yes I use her in my work. My work has these gender issues. Again I try and not make them so serious ’cause I see a lot of work that deals with identity and it’s only about the identity. To me, this becomes very, very flat. But I am very interested in why people are so freaked out by the body and by their own bodies

JO: I was recently reading a French 1930s ethnographer who said it was not necessarily about the ritual being real but about you believing in it.
AT: The last piece I did in Toronto, “Fame Prayer Eating,”  is an attempt at queer spirituality. We took some pop spirituality texts and instead of using them as strategies for changing your life, we were using them as strategies for the body and choreography. So one text we were into was “A Course on Miracles” from the 1960s by Columbia medical psychologists. They claimed the text was prescribed to them through Jesus. Rule # 1 was about looking at things and detaching meaning and expectation from anything around you. In the original book  instructions, they said you should look at objects like a light, chair or pen and say they don’t mean anything. And so we were copying this  by quickly moving through different movements with no hierarchy of what’s good, what’s bad. Training movement, pedestrian everyday or dance club movement — all of these things constantly shifting through each other.

Going back to this idea of belief, in the work the main thing is belief, with no pre-imagined outcome. That’s what a lot of my work is doing. And also at Théâtre Lachapelle this week, this is what I will be working on, for the Short and Sweet event. For my personal performance…I might try and do a different performance every night.  There will be a new object each time and I won’t have any idea of what I will do, but I have to put myself in a position where I have to believe a performance will happen. 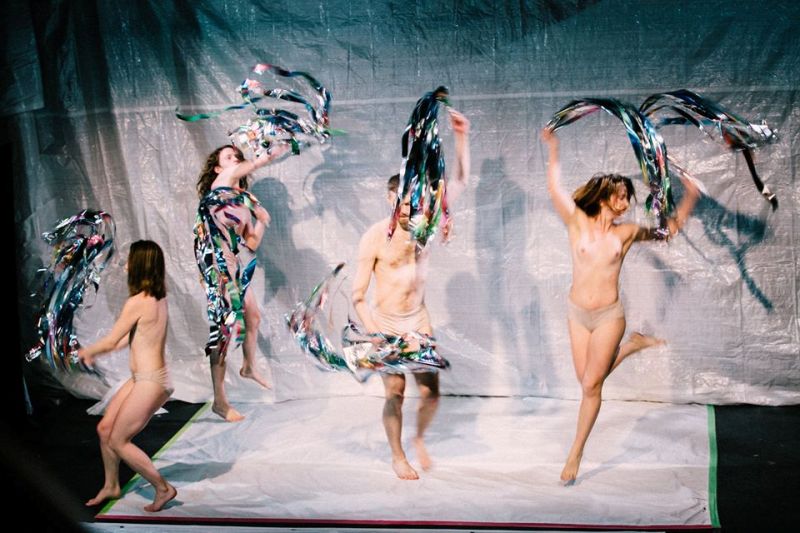 JO: Is animism part of this approach?
AT: I guess it kind of is. I’m definitely into the idea of queering, approaching the object not for what it is actually meant to be used for as a way to engage with it differently, as a way to open up potentialities within the object. Like  “This now is not a vase.”

JO: What is your approach to what “queer” is in terms of what you just said?
AT: It’s kind of a confusing thing. Queer can mean so many things. I work with queer aesthetics, which is something that has to do with lineage and history. But then to me queer is about outside of the norm, the moment before something is actually defined.

A lot of people want to talk about the queer aspects of my work. We can talk about sexuality, we can talk about aesthetics — there are particular expectations of a queer thing.  But for me, when it is really queer ,we have no idea what the fuck it is.

At the MAI, I will perform with  Stephen Thompson. He works in the world of gay vogue contemporary dance — he dances for the well known Judson Church group from New York. He is also half Asian and we will be presenting a work about “possibilities for Asianness.” I’m kind of scared about it because I’m so against identity work, but I also feel like how can work not be about identity? It’s always going to be there, things about gender, about race. They’ll always be there. But when we talk about queer, I just find it so funny — if I go to a dance festival, most work is by queer artists, so it’s hardly an exotic element.

As for the MAI, this season, I am super excited about what Michael Topping is doing. When I look at the other programs, it’s all white artists and then I look at the MAI program and it’s really interesting work by people who are not necessarily white. He’s doing a real good job.

JO: You’ll be teaching with Sasha Kleinplatz at Studio 303 in the spring. The language in the workshop’s brochure seems to be about healing.
AT: I think a lot about community and because I am engaged in a bunch of different communities — Montreal, Canada, the international dance community and so on — a lot of it has do to with thinking about the specific needs of the community. Sometimes they are selfish needs, things that I want for these communities. Sasha and I try and bring all kinds of artists together, give people the chance to cross paths with people they might not usually cross paths with. We invite scientists and marionette artists. This upcoming event at Théâtre Lachapelle, we have 25 to 30 artists participating. We have the chance to have unknown encounters with people. We will have theatre, music and dance people. We always try and bring anglophone and francophone artists together. This is very important for us. At our events, you will see big companies like Marie Chouinard present work  and also someone who has never presented  before, ever. There is no hierarchical value of this is better than this. Maybe that’s kind of healing it itself. ■