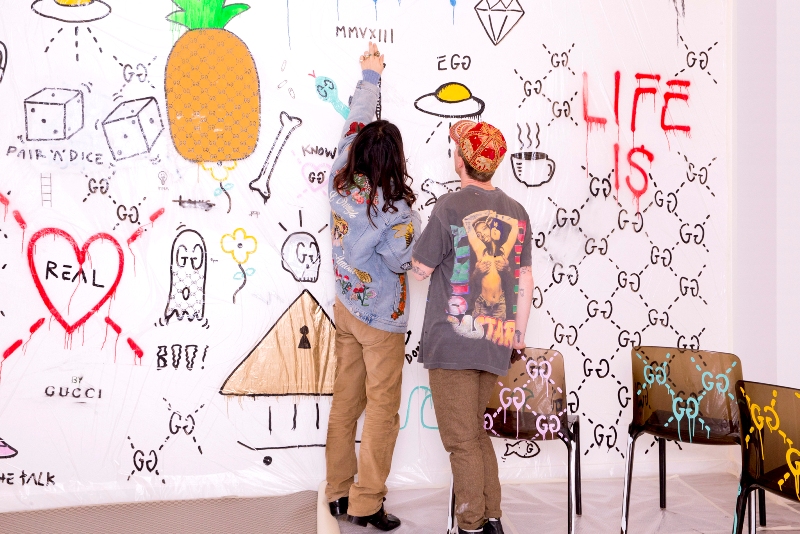 By the time Trouble Andrew was 25, he’d already achieved more than most people do in an entire lifetime. The Nova Scotia native who grew up spending his summers in Montreal was a champion snowboarder who represented Team Canada (with his given name, Trevor Andrew) on the halfpipe in two winter Olympics, Nagano in 1998 and Salt Lake City in 2002.

It was when he won his first big snowboarding prize at 17 that he made a purchase that would help define his second career as the Brooklyn-based artist he is today: A Gucci watch that for him was a manifestation of the hard work that had propelled him to the pinnacle of the snow-capped mountain of success.

“I don’t know why it was Gucci that I bought,” Andrew tells me over the phone, “but I think it was because of the imagery that I’d seen prior, like my heroes like Inspectah Deck from Wu-Tang Clan wearing that watch. I come from a very modest background, so to be able to purchase something like that, it just felt like such a successful moment and a proud moment. I still have that watch, and the value of what that represents to me is so much more than what I’d paid for it.”

Fast forward a decade or so after an injury put an end to his snowboarding days and Andrew is a multidisciplinary artist and musician living in Brooklyn with his wife, singer and producer Santigold. Working across several mediums including music production, creating multimedia works for platforms like Instagram and Snapchat, and painting on canvas, clothing and the streets of New York City, Andrew has gained recognition for his subversive use of the Gucci logo via the Gucci Ghost character he created that appears in many of his works. So much recognition in fact, that Gucci’s head designer Alessandro Michele invited Andrew to Rome earlier this year to collaborate on the luxury brand’s Autumn/Winter 2016 women’s collection, which was shown on the runways of Milan in February.

Andrew’s pieces from that collaboration, called a “creative coup” by Vogue U.K., have since been seen on the likes of Beyoncé and Madonna. This month, Trouble Andrew will return to his teenage stomping grounds of Montreal to participate in the city’s Festival Mode & Design with a conference with Dressed to Kill editor-in-chief Stéphane Le Duc on Aug. 18 at 6 p.m.

“I like symbols and logos and stuff like that,” Andrew tells me about the Gucci Ghost character’s development, “so I was just having some fun with it at first and then started going deeper into it. My mission statement for the project in a sense was that I would do this until Gucci either sues me or hires me,” he says. “It would be just everywhere — in the street, in my studio. I was having little parties there, so there was a lot of imagery that was coming out of that one spot in Brooklyn. We called it the Gucci Trap House. A lot of my friends from all over would come and crash there and work on whatever it was, painting or music or video or whatever — it was kind of a hang spot.”

Though Trouble Andrew is often referred to as a street artist, he doesn’t embrace the title — especially since a lot of his work is made for social media rather than the street.

“I feel like people don’t even look out into the real world anymore,” Andrew says. “In 2016, working online is parallel to going out and writing your name or drawing a picture or doing whatever in the street, because people are walking around but they’re not even looking in the street, they’re looking at their phone. A lot of times people just don’t even notice graffiti because there’s just so much of it.”

Gucci became aware of Andrew’s work when a photographer friend of his landed a contract to work on a Gucci lookbook, and showed them examples of Andrew’s interpretations of the famous double-G logo. Even though Andrew had always hoped his work would catch Gucci’s attention, when the call came inviting him to collaborate, he couldn’t quite believe it. 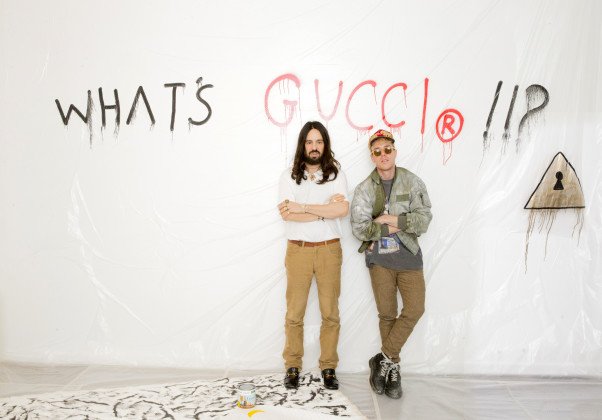 “I was really excited and blown away! Even though it was part of the plan, it was still like, ‘Shit!’ So I flew over there and I’d brought two suitcases full of stuff that I’d made leading up to this time, over almost four years. I had bags, jackets, paintings, canvases, everything. It was really a fun process because we started just creating. Alessandro (Michele) was just taking stuff and adding to it, and while he was doing work I’d be doing more doodles and sketching out other prints and making things on my phone. I just kept the flow going and we just had fun, listening to music and just creating. We only had two weeks from when I came to Rome and then Milan for the show, so we banged it out so fast. It was just mindblowing to see how fast those guys work. I’d never seen anybody move that fast.

“Alessandro got what I was doing but he has another whole inspiration pool to put together with it and that was really exciting for me. Also to be working with the best materials in the world and the best people to make them drawing up a print, and then the next day people coming in with whole rolls of the material with my print on it, was like ‘Wow.’ It reminded me of skateboarding with my friends, when you push each other but you’re having fun and you’re encouraging each other the whole time. It’s the same vibe as a jam, and you’re just flowing together and there’s no such thing as a fuck-up, you just do shit!”

Despite the ambition and drive that’s helped Andrew push his talents to their peak, his philosophy on creating art remains humble.

“Even if in the back of your mind you’re thinking, ‘Oh man, this could really be something,’ it’s always good to stay in a place of just finding the enjoyment of creating — that’s where you get the magical moments. When you put too much on it, when money and all that becomes the driving force, that’s when you lose that magic. I try to protect that magic and I don’t want to lose that. I want it to stay fun.” ■