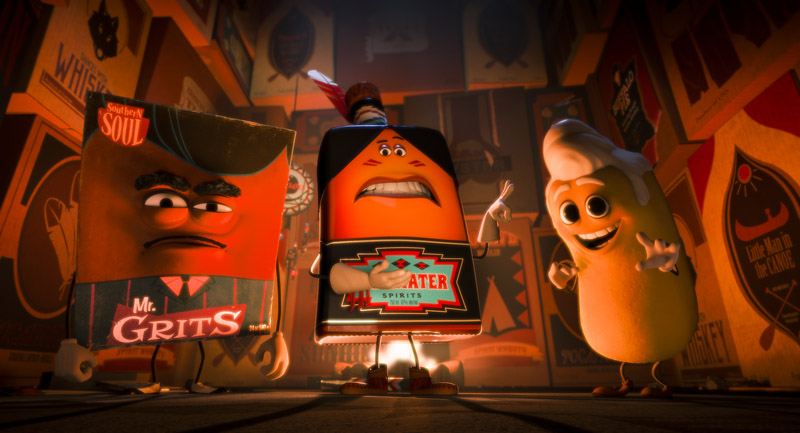 A few months ago, Seth Rogen expressed regret at some of the content in his older films, citing Superbad specifically as a film that contained some borderline homophobic jokes. This may come as a surprise considering that the marketing campaign for his latest film, Sausage Party, has revolved around phallic sausage puns, the casting of Salma Hayek as a fiery bisexual taco and a general barrage of broad-side-of-a-barn stereotypes and gags. Sausage Party is most definitely a series of stupid puns and racial stereotypes, but what apparently appears to some as lazy coasting is something more akin to a comedy exorcism. Sausage Party is both a celebration and a excoriation of mothballed, handed-down comedy tropes born somewhere in the Catskills in the 1940s — it’s a movie that posits that something can be stupid and reductive and racist, still be a joke and still be the butt of its own joke all at once. It takes someone smart (and twice as dedicated) to make something this stupid.

In a grocery store called Shopwell’s, products lie in ecstatic wait for their chance to be taken to the Great Beyond (aka outside). They view shoppers as gods and see their own purchase as some sort of rapture – which is doubly exciting for Frank (Rogen), a hotdog wiener, and Brenda (Kristen Wiig), a bun, since being taken to the Great Beyond means they’ll finally get to achieve their ultimate goal of sliding into each other. When a pot of honey mustard (Danny McBride) gets returned to the store, however, the products are forced to face an inconvenient truth: that the Great Beyond might not lead to rapture, but instead to unceremonious death. A cataclysmic event means Frank and Brenda get separated from their packages and have to find their way back to their aisles alongside a neurotic bagel (Edward Norton) and short-tempered lavash (David Krumholtz) while being chased by a roid-raged douche (an actual douche, voiced by Nick Kroll) who blames them for missing his chance at the Great Beyond.

It shouldn’t be hard to surmise what grows out of this premise. There isn’t any joke too obvious for Rogen and his cohorts to make, from the Israel/Palestine conflict between the bagel and the lavash that ends in ass-eating to the Hitleresque bottle of German mustard, the pot-smoking Native American bottle of firewater, the smaller deformed wiener played by Michael Cera who banks on his girth (rather than his length) to find success with the bun form or the general nature of fruit within the supermarket (hint: they have their own Village). Of course, products aren’t people; if anything, this mess of stereotypes is poking fun at the stereotypes inherent in both product marketing and generic cartoon structures, but don’t look too far for satirical depth in here: it’s first and foremost an unstoppable pun machine and an atheist screed a little further down the line.

The bigger point of Sausage Party (and, yes, there is a bigger point) is to essentially question blind adherence to religion. The products start each day with a song (written by none other than Disney’s Alan Menken — you know, the guy who wrote the songs from Beauty and the Beast, Aladdin and Pocahontas) that serves as their gospel, cementing human consumers as gods and the outside as the afterlife. When Frank begins questioning the nature of the outside world, most of the other products refuse to believe him. They’d much rather blindly hope for the positive they have no proof of than face a bleaker, more meaningless reality. This is essentially Sausage Party’s make-or-break point for most audiences. Not all who accept the film’s barrage of crude sexual puns will necessarily be down for a simplified though potent spiritual awakening, or vice versa. It’s also this that separates Sausage Party from merely feeling like a dare pulled off by some very powerful, bong-hitting superstar comedians. 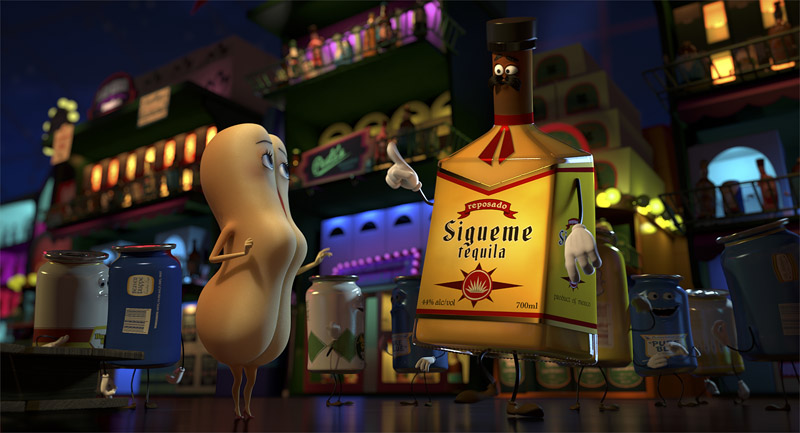 Not all the jokes hit, of course. For all of the lazily inspired gags, there’s some groan-worthy ones, and the audience I saw it with seemed to eat up the dumbest shit (any impassioned profanity, anytime the word douche is mentioned, which is often considering that’s the name of one of the main characters) to the point where their laughs often drowned out any joke that wasn’t pitched at max volume. It’s almost certain to offend you at one level or another, even if it’s through bad puns (which, to me, are potentially much more offensive than some accountable stereotype), but Sausage Party is never mean-spirited. In questionable taste, sure. Sort of bizarrely intellectually lazy while also simultaneously teeming with ambition and ideas, sure. But if I have to explain the difference between assigning stereotypes to a walking, talking taco as opposed to a flesh-and-blood human, well…

A lot of Sausage Party has a “because we can” vibe to it that ensures it’ll be an acquired taste at best and probably won’t age terribly well, but by making their most brazenly sophomoric and immature film yet, Rogen and constant co-conspirator Evan Goldberg are also actually making their most mature film in some respects (I also said this about The Night Before, mind you). Where most of Rogen’s vehicles preached a conservative, white-picket-fence heteronormativity that was always about getting the girl and living happily ever after, Sausage Party ends with… uh… not that. It probably says a lot about Rogen and Goldberg that they have to crouch this exploration of faith in 72,000 billboards’ worth of sausage puns, but I won’t be the one to say it. ■