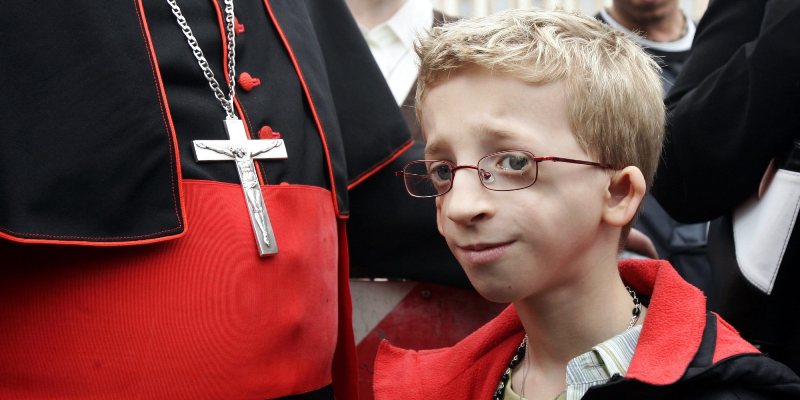 Jérémy Gabriel in a safe space

Following the decision of the Quebec Human Rights Commission requiring comedian Mike Ward to pay $42,000 in damages for jokes that referred to the disability of partially deaf singer Jérémy Gabriel, the commission has been flooded with new complaints about hundreds of comedians gathered in Montreal recently for the Just for Laughs festival.

Through an internal source at the commission, who I will identify only by her code name, Deep Gag Reflex, Quebec Ink has been able to obtain copies of four of these complaints, which allege discrimination based on physical, intellectual and moral disabilities, sexual orientation or the lack thereof.

(Attempts to verify the veracity of these letters failed completely, but field testing conducted on a group of satirically impaired adults shows that 127 per cent believe the letters are real and 115 per cent think parody is when you pay everyone the same wage.)

Complainant: Quebec Society for Amputees and the Humourless

It has come to our attention that several Just for Laughs comedians recently made reference to former Olympic athlete Oscar Pistorius “hopping” to the bathroom before shooting his girlfriend Reeva Steenkamp through a locked door. One comic suggested Pistorius was angry after finding a pair of men’s shoes under their bed. Another joked that the “Blade Runner” had his prosthetics removed in jail because guards were afraid he could bounce over the wall.

In your recent Jérémy Gabriel decision, the HRC ruled that it was okay to make jokes about persons with disabilities as long as you don’t mention their disabilities. Obviously, JFL comics (names redacted) were in violation of this policy and we trust it will cost them an arm and a leg.

A friend of ours told us the other night that many, many comics at the recent Just for Laughs festival were making fun of our very, very popular — incredibly popular, really — international leader Donald J. Trump. By our count, no fewer than 5,327 jokes were aimed at Mr. Trump by these unfair, really not nice comedians. (A world record, by the way, surpassing last year’s 511 JFL jokes about poutine. No one but Mr. Trump could defeat Poutine.)

Although we certainly appreciate the attention this has brought to those of us lucky enough to share Mr. Trump’s so-called narcissistic traits, we must of course raise serious objections to this characterization. People who ignore it when they hear a joke they don’t like are low-energy losers. By drawing massive public attention to the jokes, we hope to instead milk our “humiliation” for even more notoriety and sympathy. Consequently, we are asking the Quebec Human Rights Commission to assess damages of $7-gazillion dollars (U.S., of course) and to bind all comics (except the Muslims, we have other plans for them) to 99-year contracts in which 100 per cent of all recording rights and appearance fees will be assigned to the Trump Organization. In addition, we ask that, going forward — or backward, our prefered direction — all comedians be required to make at least half their jokes about Hillary Clinton, Mexican rapists, women’s periods and journalists that don’t write good or who shake when they talk.

To whom it may concern,

Given the recent decision in the Jérémy Gabriel case, we ask the commission to fine any comics who refer to Stevie Wonder’s vision impairment in their Stevie Wonder jokes. Of the two remaining jokes, we ask that future royalties be assigned to the You Can’t Make Fun of Bill Cosby Anymore Because He’s Blind (Although He’s Still Accused of Serial Drugging and Raping) Defence Fund. In addition, please go after Peter Wheeland for making this joke in today’s column: “While we’re on the subject, did you hear Bill Cosby keeps knocking himself out? He can’t tell which glass he put the GHB in!”

Where do we start? How about with Thomas Dale, “the first openly gay comic” to appear in the Just for Laughs Nasty Show, hosted by none other than Mike Ward. Dale ridiculed bisexuals, whom he called “the least oppressed” members of the rainbow, talked about being grossed out by anal sex and said he wished he could be attracted to pussy. All of these jokes discriminate on the basis of sexual orientation. We ask that Dale — and all other LGBTQ+ comedians — be forced to make fun exclusively of cisgendered heteronormative white people (who aren’t allowed to complain to the HRC about jokes, right?). Obviously, jokes about Caitlyn Jenner, Chastity Bono, Rosie O’Donnell, Liberace, Richard Simmons, Michele Bachmann’s husband and repressed Republican Congressmen should be banned.

Also, we would ask that the Commission fine Montreal’s Mado for her hundreds of jokes ridiculing the clothing, makeup and appearance of performers at her eponymous “gender-bending” Cabaret and that the Montreal Fringe Festival be sanctioned for their annual Drag Race competition, which relies heavily on stereotypes and uncomfortable shoes. The standard comedic defence of “it’s okay, I’m (insert minority here), too” should also not apply in these cases because nobody can simultaneously be Lesbian, Gay, Bisexual, Transgender, Transsexual, Two-spirited, Queer, Questioning, Intersex, Asexual, Pansexual, Agender, Gender Queer, Bi-gender, Gender Variant AND Pangender.

Members of the Rainbow Community need to be protected by the Human Rights Commission from jokes because the discrimination, hatred and violence we experience on a daily basis from employers, co-workers, landlords and the police is nothing compared to the harm we suffer every time some redneck makes a crack about a dropped soap bar or lesbian haircut.

Please continue prioritizing the limited resources of the Human Rights Commission on jokes, we can tackle the other stuff later. ■

14,403 cases of COVID-19 / Coronavirus have been reported across Canada according to the Public Health Agency of Canada.

7,944 cases of COVID-19 have been reported across the province according to Santé Quebéc.