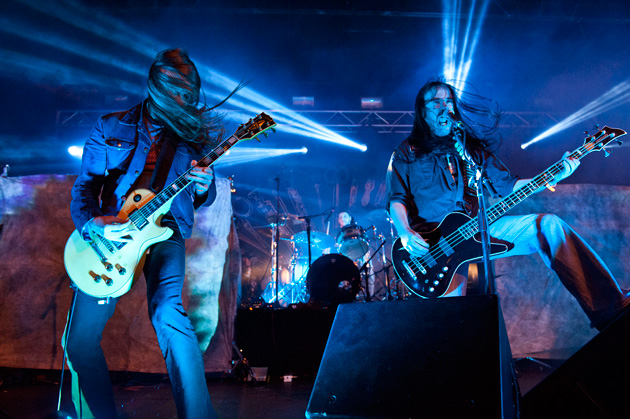 “In just a moment, Bill, Jeff, Michael and Ken, four cute kids with their hearts set on disinterment – This is Carcass, ‘Empathological Necroticism.’”

So opened the Dec. 16, 1990 broadcast of John Peel’s now legendary BBC Radio program, which has served as a launch pad for everyone from T-Rex to the Smiths to Teenage Fanclub. Peel always had his ear to the ground, and when in 1988 he declared Carcass’s Reek of Putrefaction his favourite album of the year, he was picking up on something that, however paradoxical it might seem, still feels fresh almost 30 years later.

Only two of the original line-up were onstage at Heavy Montreal this weekend – guitarist Bill Steer and vocalist / bassist Jeff Walker — and there was no sense of a band beyond its prime padded with fill-ins, trying to wring a couple more tours out of their rapidly decaying laurels, as is so often the case in this reunion-saturated musical era. Indeed, Carcass’s 2013 album Surgical Steel (their first since their mostly tepid 1996 Swansong) is one of the most triumphant returns to form after a long absence not only of the new millennium, but fuck it, probably the preceding century as well.

Watching them from deep within the throng of hundreds of head-banging sun-stricken heshers on the dusty Jean-Drapeau terrain Saturday afternoon, it dawned on me that, their jaw-dropping musical precision aside (like, seriously, they’re the tightest fuckin’ band), the open secret of Carcass’s tremendous appeal is that they’re fundamentally a rock ’n’ roll band. A blisteringly fast one that sings about exploding heads, but an honest-to-goodness rock ’n’ roll band nevertheless.

Another thing that jumped out at me was holy shit Bill Steer looks like Scott Gorham (the guitarist for Thin Lizzy, who is, not coincidentally, my favourite band). Like, pretty much exactly like Scott Gorham, a resemblance not diminished by the combination of heavy-metal-pin-up flowing locks, barely buttoned shirt and supremely tasteful, catchy guitar work. But the more I thought about it (well, to the extent that I was thinking anything besides NREEEEWWWWWWWWW WOO WOO WOO DUNH DUNH DAHHHHHHH), the more I realized that this resemblance goes deeper and broader. Like Thin Lizzy, Carcass stands out somewhat within a genre that not uncommonly tends toward a certain doltishness, by virtue of what I am going to call their poetic spirit. Behind the violence and posturing, there is a disarming wit and charm and a refreshing lack of pretentiousness.

When Thin Lizzy’s Phil Lynott sings, narrating his own exploits, “I said ‘Hey baby, meet me, I’m a tough guy. I got my cycle outside, you want to try?” or “Don’t believe me if I tell you that I wrote this song for you, there might be some other silly pretty girl I’m singing to. No, don’t believe a word,” you get a sense of the curtain being pulled back, even just a corner, so you can see the little, little man pulling the levers and running frantically to and fro. It is the sly wink that undercuts the masculinist bravado; that intimates “Can you believe I’m getting away with this?” but what is being gotten away with is not the seduction itself, but the whole pose.

Similarly, on Surgical Steel Jeff Walker has taken Carcass into such deft lyrical terrain that it verges almost on self-parody, were it not still in ultimate service of the riff. Much is made by the lazy or defensive of the seeming paradox of metal as a subculture appealing to teenage wastebags and muscleheads, but that musically entails virtuosic performance bordering on the classical. Which is true enough, but at this point is more or less a truism. What is less common is to encounter lyrics that would not be out of place, say, recited as satirical verse in an 18th-century English salon:

“From the weeping womb to the tomb
Towering fuming smokestacks loomed
Aloft the emancipated industrial
mercantile maroon.
Your heirs will be deprived this fate
A penitentiary as consumer villains
Never to enter through
the grim rusting factory gates.
Subsisting shackled drudgers & drones,
Disassembly line of skin & bone,
Collieries not beaches
lie beneath the paving stones.
Torn apart in the soul destroying granulating dark satanic mills!”

Even delivered here by an unshaven Liverpudlian, in the voice of a malevolent troll, it sets a different tone than, for example, the singer from Killswitch Engage informing the crowd that “If you’re not drinking or mosh pitting right now, you’re a fucking pussy!” I mean, you win some, you lose some, I suppose.

But as I said, all of this in service of the riff. For at the end of the day, Carcass is still just ripping as hell. Their set was heavy on the Heartwork and Surgical Steel, but more than once I found myself ecstatically wind-milling or air-guitaring to a song that only 45 seconds in I realize I’ve never heard before. If some might interpret that as a criticism, I assure you it is not, because the riffs just sound like Carcass and Carcass fucking rules.

I’ve been doing my best to not lean too hard on the putrescent, decomposing, cadaverous analogies that are such easy meat, but it is indicative of something special that out of the festering muck and viscera of their early gore-grinding musical terrorism, through the successive birth, afterbirth and rebirth of melodic death metal from the ’90s to the present, Carcass can still come off sounding fresh. Just four cute kids with their hearts set on disinterment, who look like they’re having as much fun as you are. ■