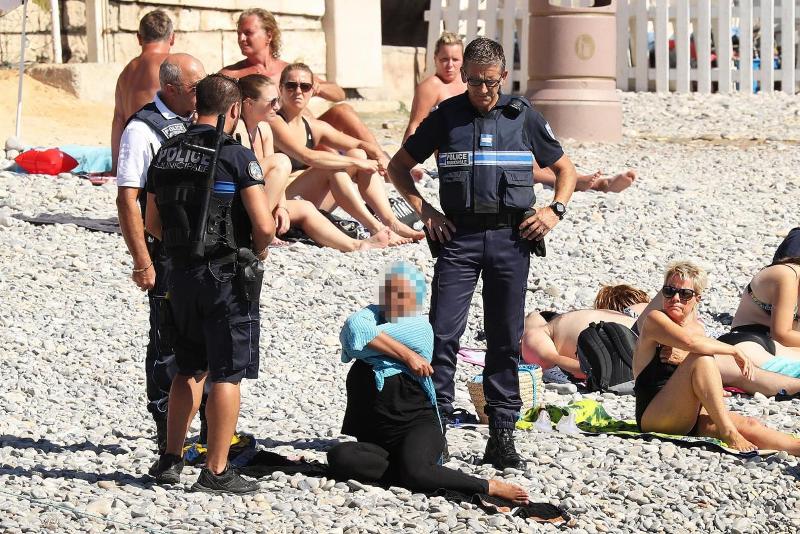 There’s nothing that better illustrates a stupid law than watching authorities try to enforce it. That was the case this week when the Internet was flooded with photos of four fully-dressed French police officers forcing a women to remove layers of her clothing on a public beach. The agents were applying a recent by-law adopted by the city of Nice that outlaws the so-called “burkini,” a piece of modest sporting attire designed for Muslim women who want to enjoy a day of surf and sand without all-but-baring tits and ass to do so.

Although the woman, a French citizen, wasn’t bathing and wasn’t actually wearing a burkini, the fact that she might be perceived as wearing one was enough to justify sending armed officers to order her to strip off her outer garments.

Modern France seems to have segued from secular to sanctimonious, from the birthplace of Lady Liberty to the refuge of Lola Libertine. Freedom of religion had been supplanted by freedom from religion, not just from the proselytizing of priests but from the public expression of anything that can be construed as piety. Propriety has become improper in the name of thinly disguised racism that conflates the biggest victims of Islamic extremism — Muslims — with the cynical and notoriously secular adherents of Daesh (aka ISIS) who have succeeded in terrorizing France.

Fear provokes irrational responses, like the banning of burkinis, and the circle is completed. By harassing women on the beach, forcing them to expose themselves if they want to cool off on a hot day, France telegraphs a message of intolerance and hatred that sets in motion the next wave of Daesh recruits.

Then they wonder why France has become one of its favourite targets. When cities like Nice respond to terrorism with new rules on beach attire, they are not responding to threats but to the desire for revenge and retribution. Faced with a situation where there is little they can actually do to prevent attacks like the Bastile Day massacre that killed 84 and injured more than 300, local politicians desperately sought to create an impression that they were doing something to prevent terror.

And so the burkini ban was born.

This may seem like a large leap, but the decision by the Denis Coderre administration this week to ban pit bulls in Montreal is just as emotional and illogical a response as the burkini ban. Although there is much to be praised in the proposed new by-law governing dangerous dogs, banning “pit bulls” is a hysterical reaction to an exaggerated threat.

I put “pit bulls” in quotation marks because the proposed by-law not only bans pure-bred dogs from the three breeds grouped in the pit bull category (American pit bull terrier, American Staffordshire terrier and Staffordshire bull terrier), it also bans any cross breeds — regardless of whether it was crossed with a doberman, dalmatian or daschund, and regardless of whether the offending DNA is 50 or five per cent of the resulting mutt.

And in an implicit recognition that the ban is motivated not by science but by prejudice and perception, the by-law definition of “pit bull” even includes any dog that even resembles a pit bull or a pit bull cross, regardless of its true DNA. So a dog owner won’t even be able to use the defence of “but my dog’s not a pit bull,” because all the city has to do is say, “well, she looks like one.”

Although the by-law offers a grandfather clause that will allow current owners the opportunity to keep their dogs under closely controlled conditions, the new rules will create a pariah class of animal and sanction ever-growing hostility to even the gentlest of these animals and their caretakers.

It’s not hard to imagine anonymous reports to the city of “suspected” pit bulls and harassment on the street. Owners of breeds often confused with pit bulls, such as bulldogs or boxers and almost any dog with a large head and muscular torso, could well tire of constant suspicious surveillance from neighbours and apply for a special pit bull licence — a sort of doggie version of the Star of David badge — just to stop the harassment.

Or they might simply surrender the dog to the SPCA, where the ban will virtually guarantee its euthanasia.

If the by-law passes as proposed, the city of Montreal will be devoting significant resources to policing a non-existent threat rather than tackling the true source of dangerous dog attacks: irresponsible owners.

Watching the limited pool of city inspectors argue over what a dog looks like may not be as comic an image as four cops looking like clowns on the beach, but it will be just as sad. ■