One of the strangest things about Woody Allen is his consistency. Not a consistency of quality, mind you; in that sense, Allen is nothing if not inconsistent. In terms of tone, story, performance quality, themes and general feel, however, the worst Woody Allen film isn’t that different from the best. Even the most radical departures in Allen’s filmography are profoundly indissociable from the rest of his work. More importantly, it’s impossible to tell from all of those elements whether or not you’re about to see a good Woody Allen movie or a bad one. That’s why, I think, his films hold a certain fascination even when he hits a period where he seems to be making only shitty ones (the state in which he currently finds himself); there’s no telling when he’ll steer the ship back on track.

Café Society is no different. It’s a period piece, which aligns it with his best recent movie (Midnight in Paris) but also with his worst (Magic in the Moonlight). It stars Jesse Eisenberg, who probably does the best approximation of Woody out of all the young actors who’ve tried it recently, but previously did it in a generally terrible and unmemorable Allen (To Rome With Love). It’s a film enamoured (of course) with old Hollywood and jazz, but one that casts those in the background of an overly ambitious comedy of manners. If there’s anything to link Café Society with his previous effort, Irrational Man, in some sort of “period” of his career, it’s the fact that both of them feature extremely superfluous voiceover narration. Call it Novelistic Allen, if you’d like. 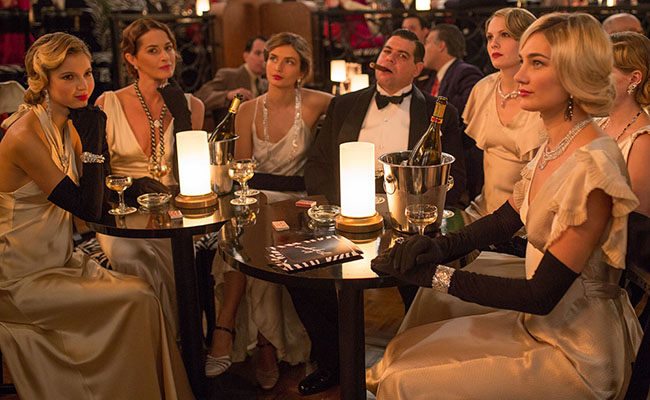 New Yorker Bobby Dorfman (Eisenberg) moves to Los Angeles with the goal of starting his career anew. His uncle Phil (Steve Carell) is a big-time agent out there and is happy to set up his nephew with a position doing odd jobs around the office. That’s where Bobby meets Vonnie (Kristen Stewart), Phil’s secretary; the two immediately form a connection, but Vonnie is already taken with a boyfriend, a constantly travelling journalist named Doug. Smitten, Bobby continues to spend time with Vonnie, hoping to woo her away from her boyfriend — whom he doesn’t realize is actually a cover for Vonnie’s affair with his rich, powerful, gregarious and married uncle.

There’s the makings of a nice little Lubitschian romantic comedy here, a comparison that Allen of course invites by setting the film in the late 30s, but there’s a grander, more sweeping ambition here. Allen also fleshes out Bobby’s two siblings (Sari Lennick and Corey Stoll), pushes the film over many years, dips into a gangster subplot and generally shoots off in all directions in a way that suggests a streamlined, not particularly well-realized adaptation of a novel.

In fact, with this and the previous Irrational Man (which voice-overed me into catatonia), I’m starting to wonder: why are these even movies anymore? Allen uses voiceover narration (his own, in this case) in all the wrong ways, explaining things that we could likely construe ourselves; he adds subplots that could not possibly be contained by his trim, straightforward direction… and then he leaves the film to trail off, shrouded in mystery, in a way that would’ve probably benefitted immensely from prose rather than Allen’s generally timid visual style.

It’s not that Café Society is bad, necessarily; it certainly isn’t embarrassing to watch. Eisenberg and Stewart are quite good, Allen avoids playing the guess-the-cameo game he pulled in Midnight in Paris (while I must say I did enjoy that, I can’t see it as a concept that has legs) and the film has some funny moments, but it’s impossible to shake the idea that this isn’t the best way to convey this story. Allen makes a movie a year and has done so for time immemorial; it’s hard not to imagine that he goes on autopilot once in awhile, but those films tend to be insubstantial piffles. This is Allen going on autopilot with a slightly more ambitious idea than usual (and sandwiched between two other instances of being on autopilot), and the spill he winds up taking hurts a little more than usual. ■