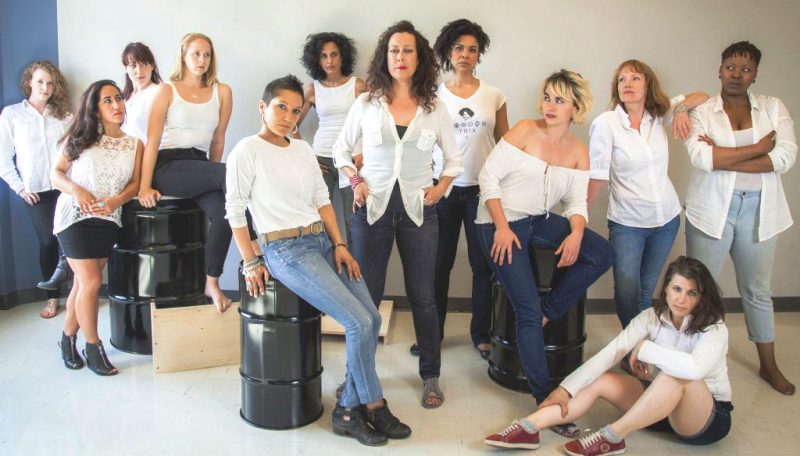 The cast of Repercussion Theatre’s The Tragedy of Julius Caesar

This summer’s third edition of Poirier and Ghostbeard’s seasonal dance-party Nord-East will bring the grounds of the TOHU to life with heavy beats, booze and BBQ. Outside 2345 Jarry E., 6–11 p.m., free entry

Join a group of local creatives, activists and academics for A Creative Conversation About Basic Income at le Ritz, an event in collaboration with Concordia’s University of the Streets Café intended to foster discussion and knowledge about the idea of a universal basic income for every citizen. 179 Jean-Talon W., 6 p.m.

Repercussion Theatre’s The Tragedy of Julius Caesar has been getting rave reviews and word-of-mouth since its Shakespeare in the Park run began earlier this month. Directed by Amanda Kellock with an all-female cast including Tamara Brown, Danette Mackay, Holly Gauthier-Frankel, Deena Aziz and Leni Parker, the play’s depiction of events that led to the fall of the Roman Empire feels particularly prescient given the Trump campaign horror show happening in the U.S. See it tonight at Côte-St-Luc’s Parc Rembrandt, or in Westmount Park on July 30 and 31. Find all the details here.

One of the best horror films of all time — Dario Argento’s 1977 sorcery masterpiece Suspiria — is screening at le Ritz after the basic income convo clears out, as part of the Femmes Femmes series. If you’ve never seen this film before (or even if you have, but never on the big screen), do yourself a favour and check it out. 179 Jean-Talon W., 8:30 p.m., $5 suggested donation (benefitting Head and Hands)