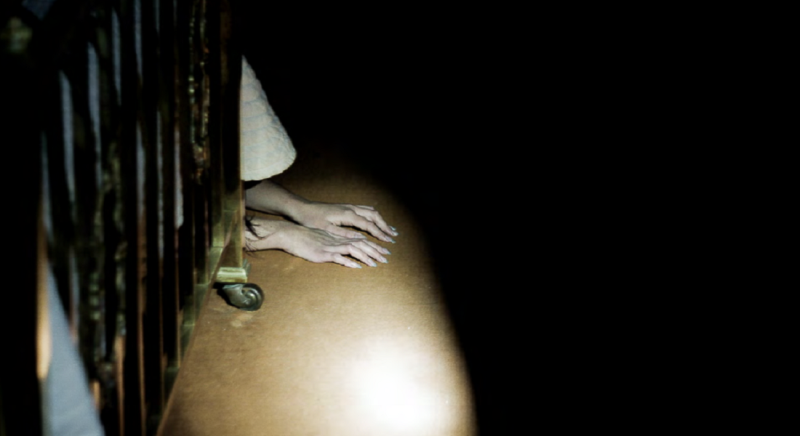 Therapy is the second film by French director Nathan Ambrosioni, who is being hailed as a  teenage horror prodigy. The film offers a remarkably focused and controlled directorial perspective on some desperately by-the-numbers material. The movie is yet another entry in the found footage horror subgenre, but is proficient enough, though, to entertain more inexperienced or mainstream viewers. Hardcore fans, conversely, may find it maddeningly derivative, and largely devoid of tension.

It begins with a glimpse of horror, establishes the framing story — video footage implying that  a family camping trip went horribly wrong has been found and is being examined by police — and builds back up to the horror by showing this footage. The central conceit is that we’re seeing the footage at the same time as these detectives, and so we experience their knowledge of the situation and their desperate attempts to solve the case firsthand. The story is expanded through the questioning of a family member’s therapist, and a potential witness. The addition of a dramatic subplot pertaining to one of the lead detectives, Jane, serves as a means to justify her emotional response to the depicted violence. Meanwhile, the incredibly fluid transitions between the frame story and the found footage are very impressive, to the point that much more experienced filmmakers should take note.

It’s the horror narrative found within this footage that lets the movie down. The film’s overly fast pacing, predictable situations and decidedly uneven acting keep you from really connecting or empathizing with the characters. Therapy, however, is certainly not without merit. The odd effective scare is engineered along the way, and the extensive genre knowledge displayed by its extremely young director is surprising. Ambrosioni has a promising future as a filmmaker, but Therapy has too many twists and turns that you see coming, and don’t want when they do arrive. (Mark Carpenter & Katie Ferrar)

It seems like the only thing gentrification isn’t pushing out of New York is this type of wry dark comedy, full of neurotic oddballs fighting alienation, responsibility and (in this specific case) a seemingly perfect relationship with someone who might be a serial killer. Women Who Kill is reminiscent of the heyday of NYC indie film, when movies that played at Sundance were actually made by near-unknowns.

Morgan (writer/director Ingrid Jungermann) and Jean (Ann Carr) are exes who continue working together hosting a podcast about famous women serial killers. Their working relationship often wanders into an emotionally fraught personal one, with lots of half-whispered “sharing” and hurt feelings boiling over. When Morgan starts dating an aloof younger woman (Sheila Vand of A Girl Walks Home Alone at Night), the pair can’t help but notice striking parallels between her life and the lives of the women they profile for a living.

It would be easy to call this film and its dry sense of humour Jarmuschian, but it’s something different altogether. It’s not trading on the inherent comedy of boredom but more on a sort of emotional malaise. Both Morgan and Jean constantly talk about the way they feel, but they don’t seem to be communicating in any meaningful way. When Morgan meets someone who pretty much straight-out refuses to communicate, it’s both liberating and… well… more than a little worrisome. If there’s anything wrong with the film, it’s how uniformly controlled the tone is; the character of Morgan is pretty repressed emotionally and the film matches her laconic demeanour to a tee. I wouldn’t say it makes the film boring, necessarily, but it could’ve used an extra spike or two of energy like the one delivered by Annette O’Toole as Morgan’s imprisoned confidante. (Alex Rose)