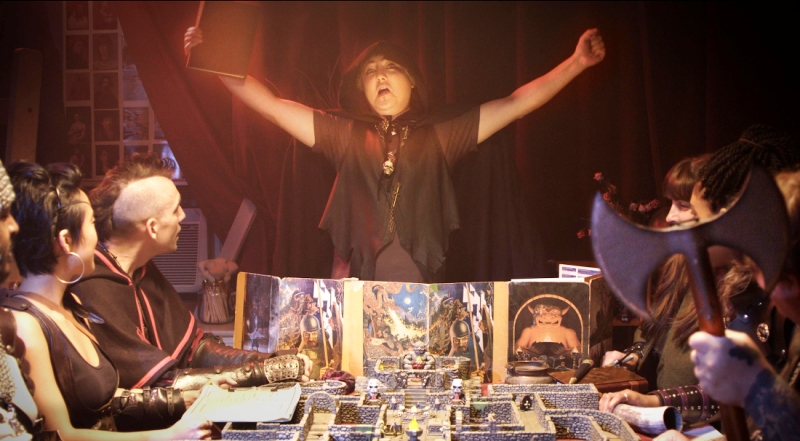 Stefan Pokorny (centre) in The Dwarvenaut

Oh, the magical worlds of wizards and monsters and the grown men who prefer them to reality, bless ’em! Stefan Pokorny is one of these men — he’s small, often wearing a wizard hat or chainmail, and he’s the oddball mastermind behind Dwarven Forge, a company that builds 3-D modular terrains for fantasy gamers. Josh Bishop’s heart-warming documentary The Dwarvenaut delves into Pokorny’s world as he takes on a new perilous quest — or as we’d call it in the real world, a new Kickstarter project — in the hope of funding an ambitious medieval town collection.

Pokorny could not make for a more endearing and entertaining protagonist. The product of a U.S. soldier’s dalliance with a Korean woman during the war, Pokorny was eventually adopted by an Italian woman and Czech man with great love for art. His prophecy was forged growing up in the streets of Brooklyn, getting up to no good until he discovered Dungeons & Dragons and art school.

With his pseudo-philosophy on the important role of fantasy games in society, Pokorny’s passion for D&D and his incredible skill at world creation will reel you in from beginning to end. In one scene, Bishop films his subject honouring the home where the game was invented, circling it in silent awe, like Christians in Bethlehem or Muslims gathering in Mecca. Bishop doesn’t belittle him as just some obsessed nerd; he showcases his impressive artistry through imaginative shots of Pokorny’s beloved miniatures and the painstaking work it takes to create them. Don’t worry, it’s not all wizard sculpting — Pokorny loves a party, especially when it involves shots and Black Sabbath.

If this film were a person, I’d just want to cuddle it. It’s easily one of my favourites at Fantasia this year, and also, a solid example of nerds just being more fun than anyone else. (Roxane Hudon) 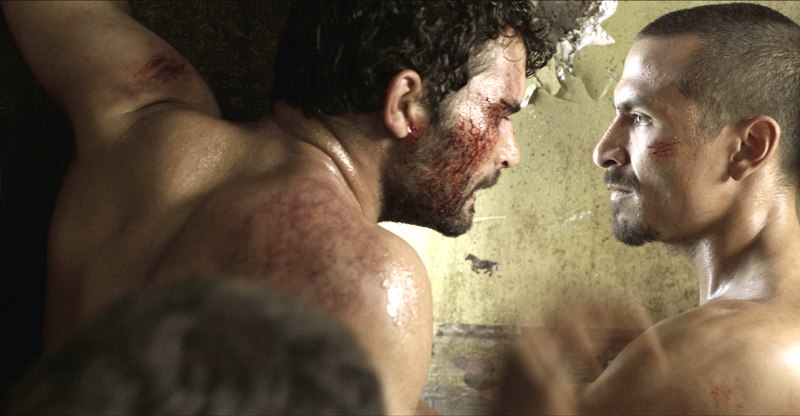 There isn’t exactly a word for the “everyone’s trapped in a room and they gotta get out” subgenre but, when done right, there’s not much that tops it. Green Room did it better than anyone and Felipe Rodriguez does it damn well with Kidnap Capital, a pretty brutal thriller set against the backdrop of illegal immigration.

Deeply in debt to another lowlife consort, Wyler (Paulino Nunes) has hatched a plan wherein he arranges for illegal immigrants being smuggled across the border to be kidnapped and tossed in the basement of his nondescript suburban Phoenix home. There, people are held against their will and forced to call their loved ones for a ransom of $2,800.

The relatively low amount of the ransom tells you a lot about the dire straits these people find themselves in; Wyler may be a murderous, criminal piece of shit, but he’s doing it all for, like, $25,000. It unfolds in tight, nervy tones, essentially a one-location thriller that slowly works itself to a fever pitch. The political nature of the thing does result in some clunky dialogue and at least one awkward bit of speechifying late in the film, but it’s sort of inevitable with this type of material. It did strike me as a little weird to have a film about illegal immigrants on the Fantasia slate, but Kidnap Capital is as tense and brutal as anything else in this year’s program. (Alex Rose) 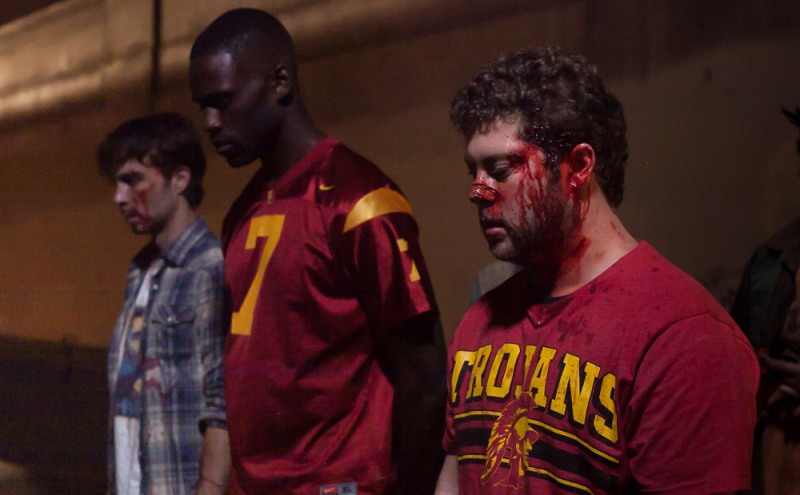 What happens when three college dudes get stuck in the most derelict part of L.A.? In Chad Ferrin’s Parasites, their presence ignites some kind of murderous rampage from the neighbourhood’s homeless population, fuelling a nightmarish chase through alleyways and abandoned streets.

Ferrin based his gritty thriller on the 1809 tale of John Colter’s capture and escape from the Blackfeet tribe. Marshal (Sean Samuels) takes on the part of the lone survivor, fighting his way naked, using anything he can as a weapon, including a large shovel. Aside from the raving bums running after him, he meets a cast of unhelpful city critters, from a prostitute and her Latino drug rivals to dude-bros driving by. Each one is unmoved by Marshal’s pleas for help, discrediting him as another crazy homeless guy.

The pacing, look and feel and throbbing soundtrack of the film definitely call back to the urban chase scenes of The Warriors. While they’re not wearing funny costumes, the looney gang of homeless killers could have easily fit in with the baseball bat-wielding maddies or those deceptive lesbians. The plot remains a simple chase thriller, but Ferrin does drop an odd curveball that’s never picked up again. We see a confused man with Down Syndrome wearing a hospital robe and being dropped off in the street. Is this hinting that all the homeless were former hospital patients with mental disabilities? I’m not sure.

There’s a subtle social commentary running throughout that then erupts in a very topical, political and totally not subtle at all ending. Hint: it involves cops. It doesn’t harm the film per se, but it does feel like an easy way out, or like maybe a film revolving around murderous homeless people shouldn’t have touched upon the theme of “Race in America.” It makes it difficult to think about anything else but the ending after the fact. (Roxane Hudon)