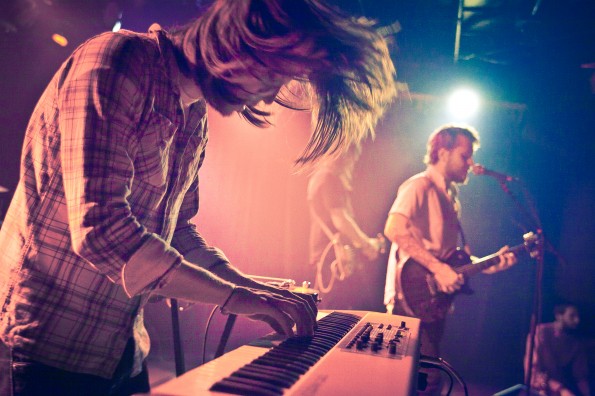 I didn’t know what I was in for at Turbo Haüs last Friday, July 15, but I heard it was going to “rip” to a degree that was not to be missed, so I hauled ass to St-Henri.

Two hours before I had never heard of Montreal band Mountain Dust or even been to the venue — in my H&M chinos and American Apparel polo I was the lost-looking basic among pseudo-bohemian girls and dudes who looked like they stepped out of Heavy Metal Parking Lot. I arrived late, unfortunately missing openers Biblical and All Dinosaurs, but with enough time to order a beer while Black Sabbath’s “The Wizard” blared from the sound system. Ozzy and company were a harbinger of riffage to come.

Mountain Dust’s set was a blast of cymbal crashing, headbanging hard rock laced with doom metal and a sensible dosage of psychedelic pretensions. The songs weren’t excuses for aimless guitar wankfests, but slithering heavy jams (the bass player laid hypnotic grooves on his Rickenbacker) that turned in on themselves like a snake eating its tail. Organ à la Deep Purple gave the music a gothic nuance, but the big surprise was lap steel guitar fed through an effects rack.

The band reinvented their blues-metal sound — a genre now as outmoded as bell-bottoms and songs about scoring with underage groupies — with well-crafted riffs that make you forget it’s all the same 4/4 rhythm you’ve heard a million times. They had masterful dynamics and pauses: the music breathed, but it breathed like Godzilla. For four thrashers who look like head shop regulars, Mountain Dust didn’t play a bum note all night.

The occasion was an album release for Mountain Dust’s debut LP (or what would be an LP on vinyl), Nine Years. As the title track indicates with its “nine years in the pits of Hell” refrain, it’s a collection of post-apocalyptic “it’s all over” dirges perfect for opium dens and suburban basements. I have to commend the poetic imagery of this lyric: “Hot dust belching from the craters on her face / Hell’s breath wraps my eyes like fire lace.” Travis Driscoll’s surreal album art is — what else? — a blissed-out naked woman bound with scarves in a hellscape of skulls, dead trees and serpents. And yes, they sold posters with digital downloads.

I can’t say I knew any of the songs they played (this being one of those occasions where an indie band’s requisite cover song— the Doors, “Waiting for the Sun”—failed to outshine their original material) or understood a damn thing the vocalist was shrieking into the microphone. In retrospect after looking them up on Bandcamp, it’s apparent they played the bulk of their new album, opening with “Evil Deeds,” the highlights being “Nine Years,” “Aveline” and, especially, “Dead Queen.” Despite my unfamiliarity with the band, I can say it was all appropriately face-melting, the best show I’ve seen in Montreal since the Prince afterparty at Muzique (an admittedly high bar). Imagine Zeppelin on their first American tour, pre-superstardom: that’s the impression Mountain Dust left in their wake.