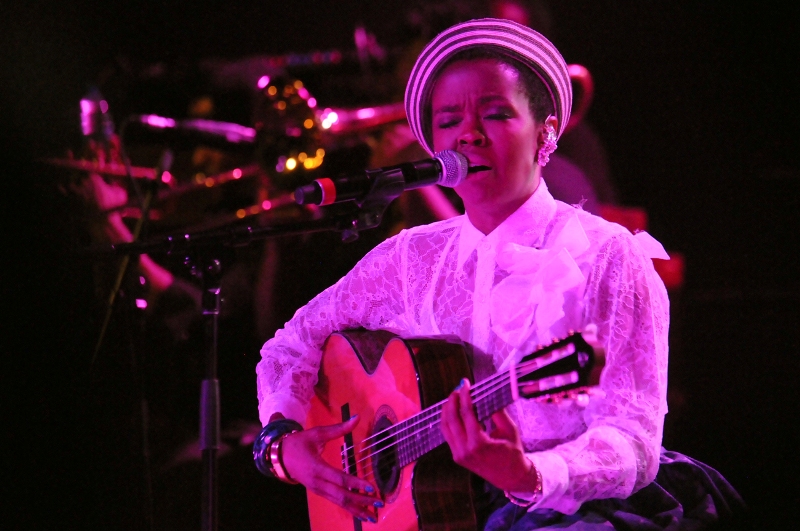 The 37th edition of the Montreal International Jazz Festival came to a close Saturday night, and after a week and change of groove in the heart of the city, I’ll state, in the easy parlance of modern day beat poets and bop acts, that shit was lit.

Much fun was had out in the field with friends old and new as Cult MTL photog Cindy Lopez and I ran around chasing the goods and enjoying the music. (Actually, she did most of the running, trying to catch as many headliners as possible in their first three songs, as her permit allows. I largely sat around schmoozing and boozing, perusing the grounds and casually heading to my nightly indoor show of choice.)

I reported back on the first half of the fest with previews and reviews regularly until about Thursday, when North American society slipped another rung toward hell. I was having a hard time buckling down to tell you all about what a great party we just had, given the most recent wave of racially charged violence in the U.S.

Despite that, I stepped out again Friday and saw some more great stuff, but if you’re wondering where I went for a spell, I’d encourage you to read this.

The shows went on and I witnessed the fitness. What can I say, but that music is good for the soul. Here are my highlights from the latter half of this year’s fest, and on behalf of myself, Cindy and the editorial team at Cult MTL, thank you for checking out our coverage and celebrating good times with us.

Night two of the hip hop/R&B Queen’s reign over Salle Wilfrid Pelletier (my coup-de-coeur of the entire fest, I’ll state outright) rolled out, like the night before, in regal fashion. Some headlines tried to grab their hot-take with Ms. Hill’s controversial tendency to take her time hitting the stage after night one.

But between an opening set, an intermission and a spirited DJ set that opens all of her performances — during which the players of her orchestra gradually took their places, one by one giving off the vibe that it’s about to go down — it’s unfair to call foul on a show of this caliber taking its time to hit the ground running.

I have it on the incredibly good account of a local musician who witnessed the band’s soundcheck at Place des Arts that second afternoon that it was unlike anything he had ever witnessed, and this man has been a pro his entire life.

The investment of time that goes on behind the scenes to deliver the show I got to see is no joke. Think of all the times you’ve been late to work or school because of traffic or whatever. If you know you’ve at least come prepared, you can hope you’ve earned the respect you deserve. Fans deserve respect for their time and money, to be sure, but a little patience for a huge payoff seems like a good deal to me, anyways.

This was my second experience in two years, having seen L-Boogie shake the foundations of a shoulder-to-shoulder packed Olympia theatre, on a humid summer night just pre-Jazz, as it happens. If you’re interested in what I had to say then, it sums up to Ms. Lauryn Hill Is Back — which, strangely, I’d forgotten I’d written until after Wednesday’s show.

That 2014 set had its minor setbacks, less time issues than sound disequilibrium, and crowd uncertainties with new arrangements of classic material. By comparison, I’d say that the seated, comfortable crowd from the floor to the three-tiered balconies of the music hall — where the sound, no matter what, would be incomparably grand — were chill and definitely vibing from the moment that DJ got on, taking time for an extra drink, anticipating rather than impatiently waiting.

The payoff was outstanding. Ms. Hill’s band opened up and got things in swing, with the frontwoman doing the superstar thing and emerging at the climax of the intro number to wild applause and adoration. At that point I turned into one solid mass of goosebump, which brought me back to that first show in 2014 and the parallel wave of joy I felt then.

New arrangements of her acoustic work made for a spirited start the the set, sounding fresh and new in their full-bodied orchestral grandeur. A four-piece horn section is never a bad thing, and the rest of the players stood game tight as Lauryn conducted, absorbed energy and gave it all back thousand-fold through a set of Fugees favourites, sped up or reggae’d down as the situation called for. Lest we forget the regal appearance before us is a rapper first, Hill chopped through verses on “How Many Mics” and later her own debut single, “Lost Ones,” with the ferocity of a young-blooded triple-time spitter that a Tech N9ne or Twista would bow down to.

The chanteuse side of Ms. Hill is in finer form than perhaps ever. Her register rings out the highest highs and lowest lows with transitional ease, something that could not be said as recently as five years ago, when personal issues indeed seemed to mar Ms. Hill’s future professional potential.

No such worries applied on Wednesday. She and her band soared through “Ex-Factor,” “Everything Is Everything,” a few cuts from this year’s Nina Simone tribute album which Lauryn features prominently on, including “Ne Me Quitte Pas” (to the delight of the Quebec audience) and showstopper “Feeling Good.” Her revered father-in-law Bob Marley got the cover treatment with a medley climaxing in a dance-fevered “Could You Be Loved” before bringing the rafters down once and for all with a triumphant rendition of certified rap/soul classic “Doo Wop (That Thing).”

Please keep coming back and coming with more, Ms. Hill, and like I said from the top: don’t let them change ya.

The weather was touch and go in the early evening, threatening to put a damper on the outdoor activities, but by sundown Montreal was relatively dry and no one seemed to worried about ruining their dancing shoes.

The upcoming Montreal rapper, a traditionalist mic talent with an au courant take on melding hip hop’s East Coast roots sound to modern production techniques and soundscapes, had a healthy crowd of several hundred under his spell at the Turkish Airlines/CBC stage, where I caught the better part of his set including Internet hits “This Ain’t Toronto” and of course the now-bittersweet ode to a hometown here, “P.K. Subban.” Wasiu, his hypeman Ghxzt and producer/DJ Dear Lola are putting in stage hours and studio time and getting better every minute from it, entertaining and engaging with relevant, forward-thinking rap music that holds mass appeal without needing to go pop. Keep your eyes and ears on these dudes.

Club Soda was the spot to be as the Swedish mods flexed their upbeat muscle over strobes and via clean, clear decibels to a packed house. I’ll never understand why indie rock crowds still don’t dance, but fuck it, I sure did. Entering to the strains of 2007’s “Amsterdam,” I was immediately impressed by the tight pacing and confident delivery I had found lacking on live videos I watch before seeing the band for the first time.

Truth be told, I am really only familiar with the Writer’s Block album — it was kind of a break-up/rebound album for me, at the time, something I hadn’t revisited in years — and I was pretty happy with the set insofar as the balance of cuts chosen from that and other works I know much less. You’d assume whistle-me-do anthem “Young Folks” would be a closer or encore, but like me, you’d be wrong. The mega-hit comes off larger than life in the live setting, but it was “Objects of My Affection” that followed, stealing the show for me. Whatever my doubts were going in are forgotten, and hopefully forgiven. I’d go along with PBJ any time.

My only regret of the fest is not being at le Savoy du Metropolis for all three nights of the local live hip hop outfits, but I gotta save my legs for the rest of festival season, so I’ll settle for the muscle aches I’m still feeling, elicited by the strains of the Friday evening tribute to the West Coast rap tradition. “California,” “Straight Outta Compton” and “Changes” set the blistering pace for a set that would send up more Dre, Snoop and young ‘uns Anderson .Paak and Kendrick Lamar. If ever we needed to be “Alright,” now is the time. And you haven’t heard “Humpty Dance” until you’ve heard it rapped by Butta Beats in a pair of Groucho Marx glasses. Extra shout-out to Dr. MaD for dropping a little NWA/J Dilla medley of choice words directed toward law enforcement during a line-up switch. Catch Urban Science every week for more live freestyle love at le Cypher, Thursdays at Bleury Bar à Vinyle.

So word. That’s a wrap. Thank you to all you readers, tourists who came and boosted our economy while dealing with our orange cone addiction, and the festival team for putting on another year of excellent programming. And, one more time for your mind, the festival’s year-long concert series brings CCR’s John Fogerty to the Bell Centre tomorrow, Tuesday, July 12.

See you at Osheaga, babies. ■