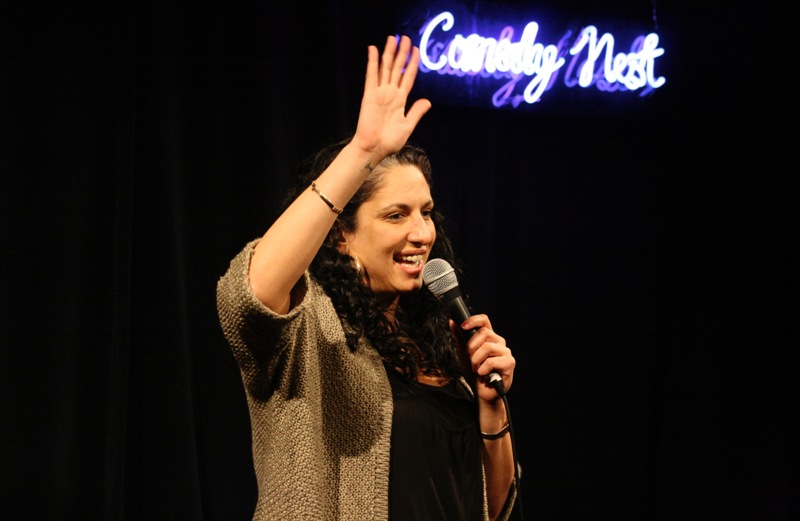 As headliners from around the world land at Trudeau Airport for Just for Laughs, dozens of comics from Montreal’s rich local comedy network are getting ready for their own flash of fame. More than 40 have won coveted places on JFL or Off-JFL stages and a few might even find themselves invited to perform at a Place des Arts gala.

That’s what happened to Derek Seguin two years ago, and his routine about his new “Newfie girlfriend” had the audience in stitches, earning a rare standing ovation from the hometown crowd. This year the winner of the 2015 Sirius XM Top Comic prize was invited back for a five-night run to talk about nuts, gluten and parenting in Derek Seguin 43.0. And who knows, maybe we’ll see him back on the big stage.

The biggest stage, of course, is the Place des Festivals — site of free outdoor shows — and this year’s favourite local comic in the Cult MTL poll, Sugar Sammy, will be performing his hugely successful You’re Gonna Rire show “for one last legendary time” on July 28 on the Vidéotron stage. After 420 performances that sold 372,000 tickets, Sugar Sammy is drawing the curtain on a series of bilingual (and occasionally quadrilingual) shows that plenty of experts thought was a crazy idea, but an audience the size of Halifax proved wrong.

We often forget that comics here may be working in a city of 3.8 million, but the anglo portion of the population is in fact the same size as Halifax. And even though plenty of francophones know English, catching the nuance of comedy in your second language is often a challenge, so there’s not a lot of audience crossover.  That’s one reason why the French- and English-language comedy scenes here have largely evolved independently of each other. One man who has worked hard to bridge that gap, however, is Mike Ward, an anglo who grew up in Quebec City and was upsetting and convulsing franco audiences with his often unconventional observations long before anyone in Westmount had even heard of him.

But Ward’s now famous all over the world, thanks in part to a complaint filed against him with the Quebec Human Rights Commission for a joke he wrote in 2010 about “Petit Jérémy,” a child (now 19) with Treacher Collins syndrome who once sang for the Pope. The subsequent human rights hearing this spring put Jérémy back on the map as he prepares to launch an English album, and Ward will find out in August if the tribunal has decided to slap him with an $80,000 fine.

Meanwhile, Ward has been working hard to get his money’s worth out of the joke, and the theme plays a much expanded role in his new material. You can hear it for free — and “judge” for yourself — by checking out Mike Ward Dans Rue on the Vidéotron stage of Place des Festivals on Saturday (July 16) at 9 p.m.

One of the most respected men in Montreal comedy will be helping warm up for Ward. Mike Paterson has come a long way from playing Mr. Gross in the CBC kids’ game show, Surprise! It’s Edible Incredible! a decade ago. Now he does Vidéotron commercials, too! Actually, Paterson does a little of everything —acting, joking, singing, even sorta wrestling — and has been a mentor to half the anglo comics in the city. These days he is taking his heavily accented French to new tortured heights on franco stages across the city. It’s easier to find him molesting Molìere than shaming Shakespeare of late, so don’t miss this chance to soak in his infectious glee.

It wasn’t that long ago that patrons of the Comedy Nest could find themselves looking around for their server, only to realize she was now on stage telling jokes. Bianca Yates, who will be part of The Montreal Show July 21 and 23 at Montreal Improv, has come a long way in a short time. After spending 15 months in L.A. taking courses and honing her craft in the city’s many open mics, Yates returned to Montreal last year with a refined act that builds on a whip-smart wit hidden behind a Brady-Bunch facade and a voice that can go from school matron to Valley Girl in the blink of a blonde eyelash.

Yates was one of about 30 local comedians who had an opportunity to perform in a trio of JFL showcase competitions earlier this year. When she got the word by email two weeks ago that she’d been picked for The Montreal Show, “I started acting like Norman Bates or something‚ shaking and smiling maniacally,” she wrote in a Facebook conversation. “I got The Montreal Show!”

“Wait, so did I!” piped in Eman El Husseini, an ex-pat queen of the local comedy scene that Cult MTL invited to join the conversation. Though they’re good friends, Eman has been busy on the road and this was the first that she and Yates discovered they’d be sharing a stage at JFL.

“I’m glad to see The Montreal Show revived,” says Eman, who is now living in and working from New York with her wife, fellow Montreal comic Jess Salomon. “This is awesome stuff. Some locals work hard year-round and deserve some recognition.

“JFL has a lot of power and they can easily legitimize a local comedy show by simply stamping their name on it. In return, they get comics working hard to deliver a great show.”

That’s something that JFL producer Nick Brazao says the organization is acutely aware of. “Montreal comedians are a key element in the success and the future of the Just for Laughs festival.

“As the festival continues to expand outward into the three-week footprint that it occupies — especially with the growth of sister festivals like Zoofest and Off-JFL — the involvement of local comedians, troupes and producers is essential,” Brazao adds. “It allows for a diversity of programming, a spotlighting of local talent and a bridge or launching pad for local comedians to be showcased alongside their counterparts from around the globe.”

For Yates, being picked for Off-JFL is “DEFINITELY NUMBER ONE,” she shouts. “I’m putting off being nervous. But I will be.”

Following in Ward’s footsteps of not-so-pure-laine Québécois comic making major breakthroughs in English is Laval’s Rachid Badouri, who followed up his 126 performances of Badouri rechargé on both sides of the Atlantic in 2014 with a killer set in The Ethnic Show last year. The bald comic with the Moroccan roots was not only invited back, he’s now the host of the Ethnic Show, a JFL staple that performs 19 shows between July 13 and 28.

Another of Montreal’s favourite sons is Ali Hassan, whose one-man show, Muslim, Interrupted, runs on July 21, 22 and 23. Born in Fredericton, NB, Hassan called Montreal home as he helped raise his young family while simultaneously building a comedy career, teaching the culinary arts and cooking in popular Plateau restaurants. He moved to Toronto three years ago, where his comedy career took off: After leading 160 segments of the comedy panel on CBC TV’s George Stroumboulopoulos Tonight, Hassan is now the host of CBC Radio’s Laugh Out Loud. The genial comic’s Off-JFL set explores his fractured cultural connections to Islam as he tries to respond to curious questions from his growing kids.

Daniel Carin and Chris Sandiford are longtime best friends and roommates who have turned their Ladies & Gentlemen Comedy Show at NDG’s Shäika Café into one of the city’s most popular stand-up nights. The description they penned for the JFL website calls their July 22 show “a pool party wrapped in a barbecue inside a picnic basket (then thrown onstage) dual-hosted by two fellas from the future.” Anything else? Oops. “We didn’t say stand-up anywhere and (so) everyone as a result thinks it’s a sketch show,” Sandiford confesses.

Okay, stand-up, not sketch. “The idea is to replicate the feeling of the café show but with bigger acts and in a real theatre, keep that loose, breezy feeling but kick it up a notch.” Helping them do that are (stand-up) comics Leighland Beckman, Robby Hoffman, Mark Little, Brad MacDonald and “a few surprises.”

Life Lessons: A Live Comedy Talk-Show doesn’t have to worry about people wondering what it is. Hosts Keith Waterfield and the aforementioned Beckman “try to find the funny in the sad, depressing and possibly embarrassing tales” of their guests, including Mary Lynn Rajskub, the deadpan comic who played Chloe O’Brian on the TV series 24. “Encouraged by libations, the guests will guide you through some of the deepest, darkest moments of their lives as the hosts offer their sound advice followed by a prescription for future success.”

And how can you hold a cultural event in Quebec without a Céline Dion-themed show, you might ask. No need to ask. On July 21, 22 and 23, Saint Céline: A Dion Cabaret “explores the life and career of Céline through comedy, music, drag and burlesque performances” from Dion-trashing Tranna Wintour and Céline superfan Thomas Leblanc in a bilingual show “for the lovers and the haters … dedicated to all the parents and children of the world.”

Just for Laughs is a festival that never stops moving, where surprises and last-minute additions are a big part of the excitement. We’ve probably mentioned three dozen local artists in this two-part series, but you never know who might get hand-picked to make an unannounced appearance at venues like Andy Kindler’s The Alternative Show at Katacombes, Théâtre Sainte Catherine’s Midnight Surprise or Hosts With the Most or Best of the Fest at the ComedyWorks.

Maybe we’ll even be lucky enough to see another local hero send fans to their feet at a Place des Arts gala.

Please don’t forget to support local comedy both during the fest and after the circus has left town.

And if we’ve forgotten anyone, you can blame Stephen Harper. ■

You can find Part 1 of the JFL local comedy roundup here. For tickets or for information on any Just For Laughs or Off-JFL show, go to hahaha.com.