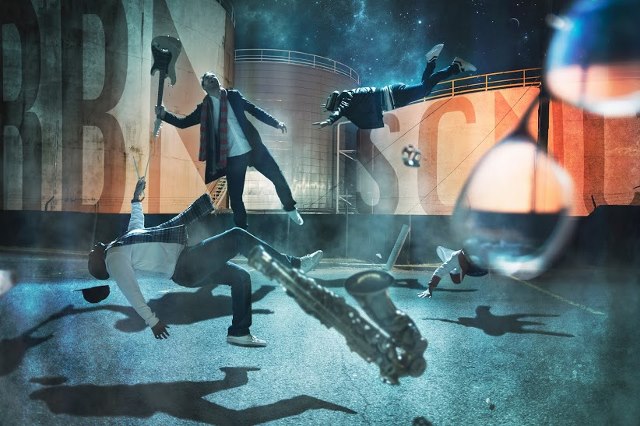 For those visiting the city for Jazz Fest or others simply not yet in the loop, le Cypher is the live-band backed, freestyle hip hop jam on Thursdays at Bleury Bar à Vinyle. Urban Science is the crack band of seasoned Montréal music vets. And Vincent Stephen-Ong, who reps both Kalmunity and Nomadic Massive on the local circuit, is the founder and porte-parole for the band and event.

After a successful three-night stint last at last year’s free midnight series at Savoy du Metropolis, Urban Science is back for more, having opened last night and continuing on for two more shows, tonight and Saturday. And if you’ve been around the fest and had the good fortune of bumping into a marching band playing M.O.P., that would also be Urban Science.

We caught up with Stephen-Ong for the skinny on their very fat sound.

Darcy MacDonald: Last year you had themes each night at the Savoy, any such arrangement this year?

Vincent Stephen-Ong: Absolutely- last year we focused on specific artists and producers- tributes to A Tribe Called Quest, IAM and Kanye West. This year, we’re taking a historical/geographical approach with East Coast, West Coast, and what we’re calling “North Coast” night- Quebec and Canadian hip-hop.  We’re being fairly liberal in our interpretations of the themes- not restricting ourselves strictly to the genres implied by the names, but exploring artists from the various regions, in an attempt to make the link between the music’s origins to where it has ended up today. So you there’s a good chance of hearing southern trap on an east coast night, even though that’s not an integral part of the strictly “East Coast” sound.

These themes are always just the jumping off points for improvisation, so this definitely NOT a karaoke night.  That said, we do have some specific tributes in mind for each night and without spoiling anything, let me just say that we do have prostheses planned for certain performances…

DM: How do you see your experience last year in retrospect?

On the positive side, getting to open up the first three nights of jazz festival last year, when we were a project with barely six months of existence, was a huge vindication and stamp of approval on what we were doing.  On the negative side, we were swamped and tried to accomplish a bit too much all at once — for example we did not rehearse at all for the opening sets and just “winged it.” Mad respect to the huge level of professionalism and skill of all the band members that it went over as well as it did, but that is definitely not a mistake we are repeating this year.  We also learned a lot about the hosting aspect of the jam. At the end of the day, the goal with this Jazz Fest appearance is to attract all those bad-ass festival artists to come sit in with us. And that means keeping the bar as high as possible for the jam session in general, and not letting it get out of control with too many people up on stage at once.  So that means we will not be putting up any “unknowns” on stage- only the best of who we know. If festival people from out of town see how great the top tier of Montreal talent is, they’ll definitely WANT to sit in with us. Just last week we had Justin Brown (Thundercat, Ambrose Akinmusure) and Young Chuck (Pomo) sit in with us at the Bleury Bar. It was total madness.  Who knows who will be there these last three nights of Jazz Fest? Anybody who sneaks backstage at a festival show should definitely be telling those artists to come to #LECYPHER at Savoy afterwards!

DM: So I hear you guys are turning heads on the street with a new brass band offshoot, what’s that all about?

VSO: Basically, Urban Science Brass Band is a portable New Orleans brass band version of Urban Science. Tubas, sousaphones, trombones, trumpets, saxophones, marching band setup for our drummers, and MCs on megaphones.  Playing re-imagined versions of “Touch The Sky,” “Ante Up,” “What’s The Difference” and more. The kind of music that stops traffic and makes you get up and dance. Modibo Keïta is taking the lead on this off-shoot project and it is definitely a huge passion project for everyone involved.

The approach for now is also 100 per cent guerrilla style. We will be announcing our appearances not more than an hour or two before we hit it, at a random Montreal location. You’re either there or you’re not. As far as I’m concerned it’s the hottest shit ever. And I cannot see how we won’t be playing every single goddamn festival and street parade by 2017.

VSO: We’re at Bleury Bar à Vinyle, every single Thursday night.  Every single night features amazing food, opening acts, some of the city’s best DJs, and of course Urban Science killing it with the seven-piece live band and the #LECYPHER hip-hop and soul jam session. This is our main focus and will continue to be. We’ll be playing at a number of other festivals (Samedi in the Parc, Under Pressure), continuing our #LEFREESTYLE rap competition (next edition coming up in August!), continuing as the house band for our series the Rap Battles 4 Social Justice, celebrating our YEAR TWO anniversary in October, the list goes on and on. Oh and we’re also working on putting on a street dance competition of course with Urban Science live band hosting the night.  And we’re even working on offering up workshops in schools- rap, poetry, singing, band workshops, and more! Exploring musical and academic subject matter through hip hop.

And in terms of longer term plans, we’d really like to win a Grammy. It’s all in the pipe. ■