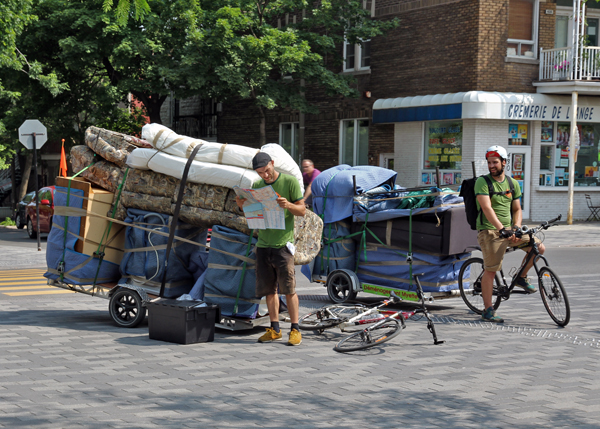 It may be Moving Day in Quebec but it’s also Canada Day nationwide, which means a lot of shops and services are in vacay mode. Closed: banks, most government offices (including post offices — there will be no mail delivery either) and shopping malls. Open: SAQs, food markets, museums and all tourist sites, most restaurants and many shops (though it’s wise to call ahead if you have a specific retail destination, just in case).

There’s a lot happening at the Jazz Fest tonight — see our recommendations in the first part of our almost-daily festival guide.

The “reVAMP”edition of Gay Goth Nite will start early with a screening of Elvira before the dance party kicks in. Organizers encourage dressing up, minus any flagrant cultural appropriation, and goth purists please note that there will be pop music mixed in with the death rock and batcave stuff, okay? No reason to sulk. Bar le Ritz PDB (179 Jean-Talon W.), screening at 9 p.m., $5 before midnight/$10

Also on the party front is the fourth edition of You Better Stretch at Matahari Loft, with DJs Larue and NoKliché (1673 Mont-Royal E., 10 p.m., $10 after 11:30 p.m., cheaper earlier) and the Moving Day edition of boogie, disco, funk, house and rare groove night Vinyl Love with DJs Huile, le Laitier and Mayor Wax D, which, fittingly, appears to have moved from le Bleury to le Belmont (4483 St-Laurent, 10 p.m., free).