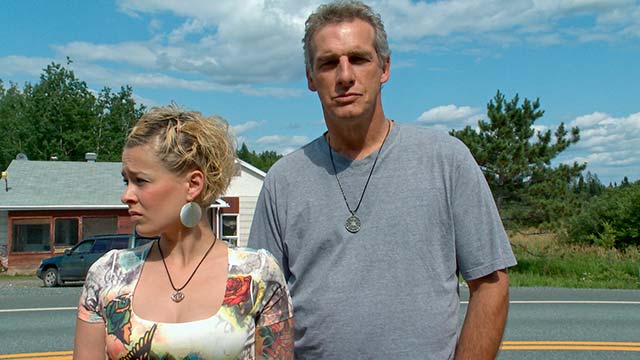 Ninety per cent of the time, I find the initial part of a found-footage horror film — the part where nothing happens and the characters are just futzing around waiting for horrible shit to descend upon them — to be the most compelling part of the movie. There’s something fascinating to me about the forced naturalness of people filming themselves in everyday life, and clearly that fascination is shared by Lawrence Côté-Collins, who makes her feature debut with a weird little mockumentary that clearly worships at the altar of Robert Morin.

Anick (Marjolaine Beauchamp) is a social worker who has been tasked with creating a video profiling ex-cons and their lives on the outside. She ships up to a remote village in Abitibi to profile Scott (Ronald Cyr), a lifelong convict and addict who has now spent nearly seven years on the outside. Unable to find work, Scott lives with his much-younger girlfriend Jessie (Whitney Lafleur), a somewhat free-spirited but rural-minded (her lifelong dream is to swim with dolphins in an all-inclusive resort) young girl who doesn’t work, either. As time progresses, Anick becomes increasingly fixated on Jessie, somewhat losing track of her film as her infatuation grows.

Nothing horrific happens in Écartée. It doesn’t turn into Cloverfield by the third act, and yet Côté-Collins maintains a queasy sort of tension through the clearly voyeuristic presence of Anick in these otherwise unremarkable lives. A sort of Stockholm Syndrome sets in as the more worldly Anick becomes increasingly fascinated with Jessie’s somewhat banal obsessions — a pop song on the radio, angel-shaped knick-knacks — and stripped-down sensuality. It’s not flawless — Anick deserves a little more fleshing out as a character that the form perhaps doesn’t allow for — but Côté-Collins shows a real knack for the blurring of fiction and reality, not to mention getting naturalistic performances out of people who, as far as I can gather, aren’t professional actors. 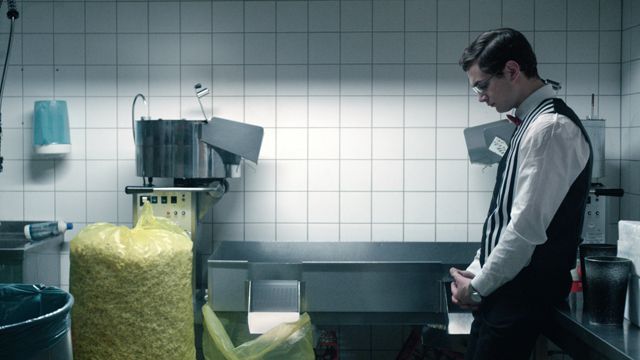 David Clay Diaz’s Agonie opens with a title card: It explains, matter-of-factly, that on a certain date, a young man stabbed his girlfriend to death and chopped her up. His motivations are unknown. This title card seems innocuous enough; a simple contextualization of the film we’re about to watch. Yet that title card completely and utterly deflates the entirety of Agonie. (Warning: the rest of this review kind of contains spoilers.)

The careful wording of said title card suggests that we’re to be left in the dark as to which of the film’s two protagonists is the young man in question. Christian (Samuel Schneider) is a dark, serious and studious law student with a bright future ahead of him; he lives with an aunt in a nice, sparse flat and has a part-time job at a movie theatre. Alex (Alexander Srtschin) is the son of a beat cop who lives in council housing with his much-younger siblings, has no job, no girlfriend and essentially no prospects. He spends his days working out and his nights clubbing, filled with venom and rage about his lot in life. Which of these men sounds like the kind who would kill a woman for no particular reason? The one that sounds like a perfectly normal young chap, or the one you’d totally expect to do such a thing? Which one makes for the the more ironically poignant Goofus-and-Gallant moral?

Without the title card, Agonie is a brooding study of young male alienation. With the title card, it’s a falsely profound guessing game that spends 90 minutes getting to the idea that you can’t judge a book by its cover. It’s technically sound, drawing on filmmakers like Haneke and van Sant in its austere, unemotional visual style, but it’s more than a little condescending to its audience. It makes essentially one point throughout (it’s “the kids aren’t alright,” if you were wondering) but manages to beat the audience upside the head with it within the first two minutes. It’s rare that 30 seconds of immobile text across a black background can manage to completely flatline a movie, but Agonie has that honour.