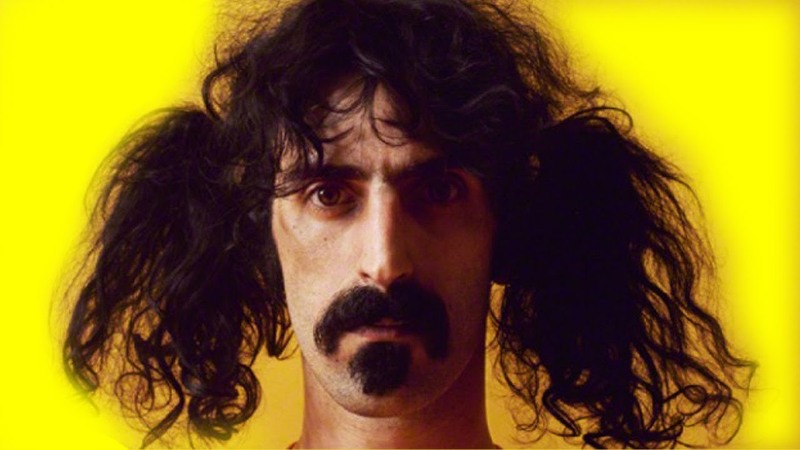 I own two Frank Zappa records.* This is about as many Frank Zappa records as I’m ever likely to want, and yet I know more about Frank Zappa than pretty much any other rock musician out there. When I was an undergrad, Concordia offered a class in the music department that was all about Zappa. I took it as an elective mostly because I was completely mystified that they could offer an entire class about a rock dude, rather than because I liked his music. At the end of the 13 weeks, I wasn’t much more of a Zappa fan than before, to be honest — his work spans so many genres, is often so noodly and so mired in the specific timeframe it was made in that a lot of it leaves me pretty cold.

It’s hard to deny that Zappa the man is a compelling figure. A teetotaler who made consistently drugged-out-sounding music, a family man who gleefully wrote about sex to the point where he was routinely censored and/or banned, a hairy hippie who considered himself a conservative but argued for freedom of speech, a man who notoriously detested the mainstream media but apparently could not refuse any interview opportunity (even breakfast television) and as likely to release an earworm-y novelty single as he was to pen a symphony, Zappa was a figure of contradictions. That’s evident in Thorsten Schutte’s Eat That Question: Frank Zappa in His Own Words, a documentary that attempts to tell the story of Zappa entirely through footage of Zappa himself, rather than the usual “here’s a bunch of people and what they thought about Zappa” approach.

There are no talking heads in Eat That Question; there’s no voiceover that explains to us what we’re about to see. Instead, Schutte weaves a schematically chronological portrait of Zappa through his various appearances in media, from his spot on The Steve Allen Show playing wild musique concrète on a bicycle to his last televised interview on the Today show shortly before his death from prostate cancer in 1993.

The majority of the footage is culled from televised interviews, a medium that Zappa supposedly hated and was sometimes openly hostile in but that he must’ve enjoyed at some level considering how often he did them. (In one section, a morning show host speaks “via satellite” to Zappa in his home, clad in a silk housecoat, as he dicks around on a Synclavier.) That’s interspersed with some performance footage and other behind-the-scenes bits and bobs, but the film studiously avoids the in-depth rockumentary structure of going album-by-album (many of them go entirely unmentioned).

It’s admirable how much Schutte actually succeeds at letting Zappa speak for himself. Zappa, of course, didn’t consent to his words being used in such a way (his wife Gail served as a producer before her death) and one suspects he would’ve hated to have his sometimes hostile interactions with the press be reframed as “his own words.” Yet by letting Zappa’s sometimes contradictory opinions roll out without cutting to a talking head bit by Flea or Bono or other tangentially relevant rock figures works wonders for his own peculiar, opinionated moral compass. It’s interesting to see his own path reflected at us through his concerns (with censorship, with technology, with what he perceives to be the vacuous nature of pop music) as they happen rather than with the benefit of hindsight. One wonders what Zappa would make of the whole Trump debacle these days — or exactly what kind of music he’d be making in 2016 (I have to assume EDM based on his wholehearted acceptance of electronic technology near the end of his life).

That does leave the question of who exactly this film is for. My own weird relationship with Zappa notwithstanding, it’s hard to see exactly who the best audience for this is. Neophytes will likely be turned off by the film’s aversion to context; if one knows absolutely nothing about Zappa’s music, it’s a lot to dive into head-on considering so little biographical / factual information is given. On the other hand, die-hards are likely to already know this stuff — and the real old rockheads (a surefire market for that nostalgia dollar) may even remember seeing this stuff when it was on TV. Schutte does an admirable curation job and puts together a film that doesn’t really need that connective tissue, but I suspect it works better in conjunction with another work about Zappa (like a biography) than as a standalone experience. Schutte should be commended for his stubborn avoidance of rock-doc rigidity, but I suppose there’s a reason those are so popular.

*(If you were wondering, the two Zappa records I own are Hot Rats and the first Mothers of Invention record.) ■