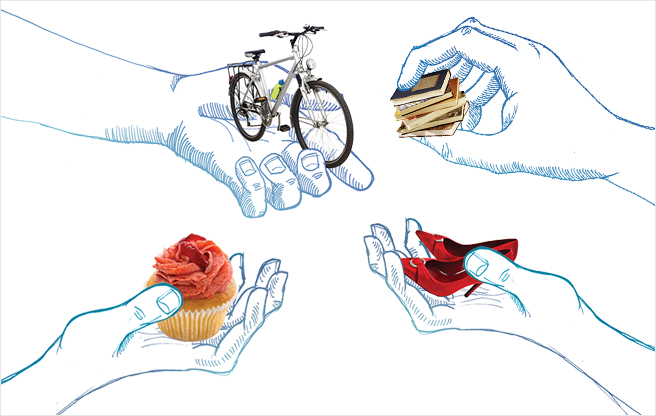 Although new mobile sensation Pokémon GO hasn’t implemented any trading features into their game yet, there’s already an app out there that does one better.

Bunz is one of many good and services trading and bartering apps, but it’s one with high aspirations: “We want to change the world and consumer habits,” says Bunz marketing director David Morton. “Items have their lifespan lengthened by Bunz.”

Bunz is coming to Montreal on July 16 to show off their platform, which has a “strict no cash policy” so all the trading is done without money. This changes the way that users interact, according to Bunz co-founder Emily Bitze. “Getting rid of money gets rid of the competition,” she says.

When monetary value is removed the equation, people trade what they don’t need for what they do. The desire to squeeze every bit of value out of an item, or haggle for a lower price disappears. Anything (legal) can be traded on Bunz, with furniture, services and consumables such as food being among the most popular swaps.

The platform, founded in 2013 as a Facebook Group, is currently available on Android, iOS and online. Montreal is home to the second largest community of traders, following only Toronto, the app’s hometown, which boasts an impressive 60,000 users.

To show their appreciation for the Montreal Bunz community and to expand their network here, the “trading zone” has organized a benefit event and launch party this weekend at la Vitrola, with the cover charge and food donations going to the Mile End Mission. Other than being a way to raise money for a good cause and meet and trade with other Bunz users, it’s also a show — conceived in collaboration with the POP Montreal festival — with three Montreal bands booked to perform at the event.

The organizers hope that attendees go home at the end of the night with not only some cool new stuff, but a new outlook on consumerism as well. ■

The Bunz launch party and benefit show, with music by UUBBUURRUU, Anemone and Nobro, is happening at la Vitrola (4602 St-Laurent) on Saturday, July 16, 8 p.m., $10 suggested donation/or a non-perishable food item (for the Mile End Mission)