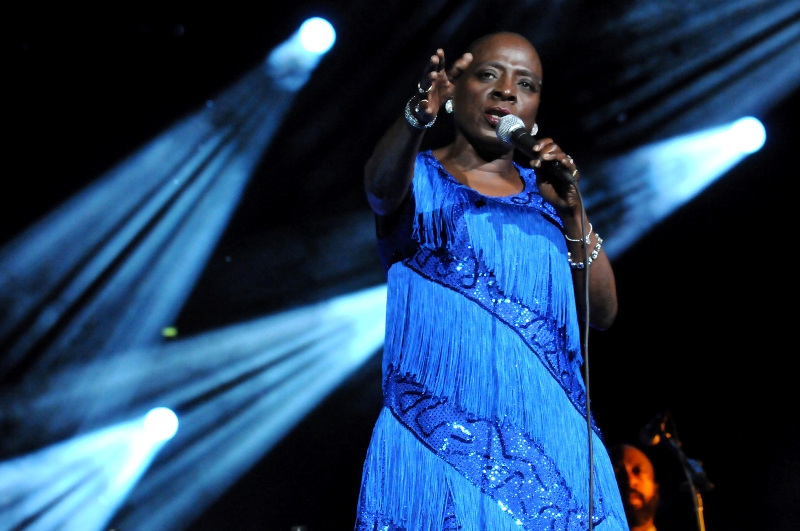 That’s a good way to describe what Sharon Jones & the Dap-Kings brought to Place des Festivals for the grand opening of the Festival International de Jazz de Montréal. By the time their midset showstopper, “Get Up and Get Out,” climaxed into a gospel rave-up, even a chemotherapy patient was on her feet and dancing barefoot.

That patient is Sharon Jones, soul chanteuse and subject of the forthcoming documentary Miss Sharon Jones! That patient out-danced everybody, while rocking an electric blue dress with tassles and belting R&B numbers for more than an hour.

Jones is an anomaly as a performer who had her big break at 40, in an industry primarily targets youth audiences and remains hostile to the aging process. While the bastardized label “indie” often evokes white guitar rock and twee or disaffected vocals, Sharon Jones and the Dap Kings are indie and anything but. Maybe you’ve heard “Nobody’s Baby,” “Make It Good to Me,” or “Got a Thing on My Mind” as part of a Spotify playlist in your favourite hipster café. Although a product of the independent label Daptone Records, the 10-piece Dap Kings aren’t ironic or meta — they’re not nu-funk or neo-soul or neo-anything. Instead, they’re a straight-shooting, hard-grooving funk/soul/R&B outfit, a retro act without self-aware pretensions. The band is all chicken-grease guitar, served with horns à la Stax/Volt and Motown harmonies. Jones gleefully paid homage to Ray Charles and Louis Armstrong onstage, when she wasn’t telling off pancreatic cancer like she was Tina Turner giving Ike the boot. 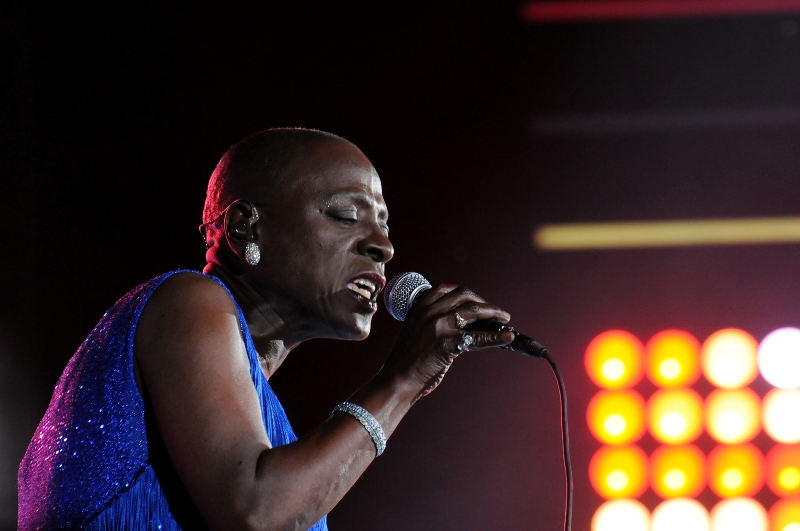 Music writers have benevolently called Jones a soul “diva,” but the word doesn’t apply: divas get hand, foot, and head massages concurrent with their cupping procedures, while Jones only demanded that we follow along with her retro dance moves. She marched across the stage to her trumpeter’s rendition of “When the Saints Go Marching In.” She did the jerk and the swim, the twist and the James Brown, the boogaloo and the funky chicken. “I’ll feel that to-mor-row!” she wailed, drawing genuine laughs from the crowd.

Remember the old James Brown routine, where the godfather played like he was on the verge of collapse, only to shuck off the towel his handler would drape over his shoulders and rush back onstage? Jones’s set was the opposite: the threat of illness brought a dire edge to the performance, but she never took a knee. After her opening number, Jones said she felt like the chemo was choking her but she would struggle on through and work up her energy. By the end of the set, she wasn’t being ushered offstage, for make-believe purposes or otherwise. When it was time for the encore, “I Learned the Hard Way,” Jones had gusto to spare.

The band didn’t even play the bulk of their moderately popular songs or the covers they’ve placed in Lexus ads, but if anyone in attendance wasn’t sold by the time Miss Jones burned the place down with the torch song “100 Days, 100 Nights,” they better get their ass to a doctor.  ■

See our guide to the Jazz Fest here.